The vast majority of German MPs voted for the €130bn rescue package, despite it being unpopular with the electorate, who know Germany will foot the bulk of the bill 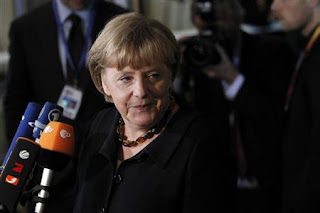 the Guardian,
27 February, 2012
Angela Merkel persuaded the German parliament on Monday to ratify the second Greek bailout, despite admitting the plan to rescue Greece was risky and could yet fail.
"The way ahead for Greece is long and is, truthfully, not without risks," the chancellor told the Bundestag, the German parliament, before the vote on Monday. "No one can give a 100% guarantee of success."
The vast majority of German MPs voted for the €130bn rescue package, despite it being ever more unpopular among the electorate, who know Germany will foot the bulk of the bill. A new poll in the Bild am Sonntag newspaper found 62% of Germans are against the rescue package, an increase from 53% in September.
Of the 591 MPs present for the debate, 90 voted no and five abstained. It was the seventh time the Bundestag has voted on German aid to faltering countries since the debt crisis began.
As anti-German sentiment grew on the streets of Greece, Bild, the biggest selling German tabloid, printed on Monday STOP! in large letters on its front page, urging parliamentarians not to "carry on down this wrong path" but to vote against the bailout.
Feathers were ruffled in Merkel's coalition over the weekend after her interior minister became the first government minister to suggest publicly Greece should leave the eurozone. Hans-Peter Friedrich was quoted in Der Spiegel saying: "Greece's chances of regenerating and becoming competitive are definitely greater outside the eurozone than in."
A Greek exit should be optional, he insisted: "I'm not talking about kicking Greece out, but to create incentives for a departure which the Greeks will find hard to pass up."
Despite his inflammatory comments, Friedrich is believed to have voted for the package, which Gregor Gysi, head of the leftwing party Die Linke, described as being equivalent to "Versailles, when what is needed is the Marshall Plan". All Linke politicians planned to vote no to the package, along with around a dozen rebels from Merkel's coalition.
In her Bundestag speech Merkel was heckled when she said she was aware that there were those "who think Greece is a bottomless pit, a hopeless case; who say, wouldn't it be better for everyone if Greece reintroduced the drachma?". Opposition MPs called out Friedrich's name as he sat trying to look unmoved behind the chancellor.
Merkel said she had "weighed up the pros and contra arguments and come to the conclusion that the chances of the programme [for Greece] succeeding outweighs the risks".
The risks were "incalculable" but worth taking, she said. "As chancellor of Germany, I should and sometimes must take risks, but I cannot embark on dangerous adventures."
Building her case for the Greek rescue plan, Merkel evoked the European Union's founding fathers to persuade her parliament that the union was worth saving.
"The founding fathers of the EU built the European Union with strength, ideas and courage. They learned lessons from bloody centuries of suffering in Europe and built a Europe anchored in peace and freedom. They didn't do that just for themselves, but also for future generations. Now it is up to us – with strength, ideas and courage – to write the 21st century chapter of European history Not just for us, but also for our children and grandchildren."
The vote came as Greeks were absorbing news that Germany was sending tax collectors to Greece to help with the country's evasion problem. Niki Fidaki, a computer scientist, said anti-German feeling increased markedly over the weekend. "It's disgusting," Fidaki said. "They shouldn't be ordering us about. People don't like the Germans. But they [the Germans] aren't really the problem. We are the problem – we need to change. But nothing ever changes in Greece."
Simeon LeFineviotis, a pilot sitting at the next table to Fidaki at a coffee bar in downtown Athens, agreed that anti-German sentiment was on the rise. "There is bad feeling towards Germany. It is like someone coming into your house telling you how to live your life. No, don't make your coffee like that – do it like this. Don't sit on your chair that way – sit up straight."
Posted by seemorerocks at 08:58