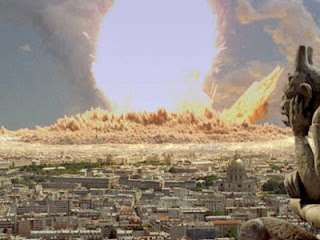 Huffington Post,
25 Febraury, 2012
Wyoming lawmakers pushed forward legislation to explore how the state would respond if the country fell into economic and political turmoil.
The so-called doomsday bill, passed in the Wyoming House on Friday, would create a special task force to study ways the state would handle such crises as a food shortage to a government shutdown. Some provisions that will be explored include Wyoming forming its own army and issuing its own currency.
The task force formed by the bill would include state lawmakers, the head of Wyoming's Department of Homeland Security and the state attorney general.
The bill must pass two more House votes before it reaches the Senate, according to the Casper Star-Tribune.
So far, no word if the task force will explore solutions for a Zombie Apocalypse, as the Center For Disease Control has done.
Posted by seemorerocks at 19:13