This is is the second time I've encountered "coincidental" interference this morning. When I tried posting this Blogger just "happened" to have technical difficulties and I couldn't post it.  When I emailed the HTML code to myself I was immediately able to paste it in and post it

After reading this headline... 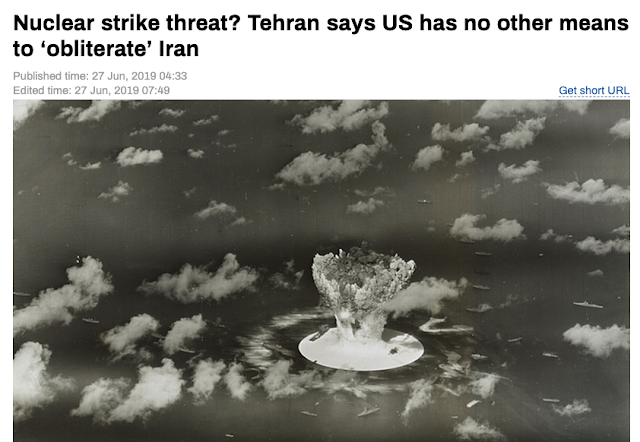 
....I saw the following from Russia-based ex-Israeli intelligence officer, Yakov Kedmi in which he states, quite credibly that the US CANNOT win a conventional war against Iran.

What I took out of this is that Trump MUST mean nuclear weapons when he says he will obliterate Iran.

After having reached this conclusion independently the hairs stood up on the back of my neck when I saw the following; Tehran agrees.

Nuclear strike threat? Tehran says US has no other means to ‘obliterate’ Iran


Blatantly threatening to launch a nuclear war against another country is not only illegal under international law, Iranian FM explained, but proves that President Trump does not think through the ramifications of his rhetoric.

“There is a United Nations charter, and threat of wars is illegal,” Javad Zarif told CNN paraphrasing Article 2.4 of the UN Charter, a day after President Trump spoke menacingly about “obliterating” Iran if the Islamic Republic endangers “anything American.”


That statement indicates that US intentions are certainly illegal. The United States is not in a position to obliterate Iran, they do not have the capability other than using prohibited weapons to do this.


Zarif did not elaborate on what exactly he meant by prohibited weapons, but he recently pointed out that the US was the only country that ever used nukes, and noted that Iran is ready to defend itself against US aggression in any scenario.


The two nations stood on the brink of war last week after Iran shot down an American spy drone over its territorial waters. The US wanted to retaliate by launching air strikes against Iran, but the mission was aborted the last minute by Trump, allegedly after he was told that as many as 150 people could die.


While both countries stress that they aim to avert an all-out war, Iran continues to view American rhetoric, military and economic actions against Iran as “confrontational” and “provocative.”

Reminding the American commander-in-chief “that we don't live in the 18th century,” Zarif suggested Trump to hire new advisers, people who can fully understand the Iranian position and who can offer viable solutions to the crisis. Trump receives “wrong information, wrong analysis, and now President Trump finds himself in a situation where he believes that he needs to get out,” Zarif said.


Earlier, Supreme Leader Ali Khamenei made clear that Tehran will not negotiate with Washington until it drops its “maximum pressure” campaign and a list of demands the US wants Iran to fulfill to steer out of the crisis, which Donald Trump started when he unilaterally withdrew from the Joint Comprehensive Plan of Action (JCPOA), commonly known as the Iran nuclear deal, last May.


No such thing as ‘short war’ with Iran – foreign minister 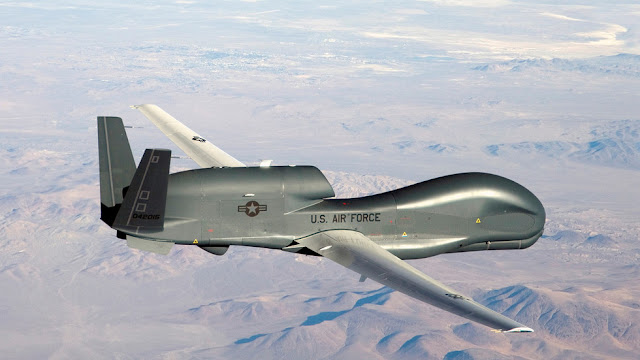 Iranian Foreign Minister Javad Zarif issued a damning post on Twitter, slamming Donald Trump’s policy and ridiculing his claim that war with the Middle Eastern nation would be a quick affair.


Zarif, who has served under President Hassan Rouhani since 2013, said that a “short war with Iran is an illusion.”In four other bullet points, he takes down Trump’s policies one-by-one. In the first, he pointed out that sanctions are not an alternative to war but, in fact, itself constitutes an act of war. In another, he states that Trump’s reference to the “obliteration” of Iran amounts to a threat of genocide, which is a war crime.

Echoing previous statements from his government that Iran will not enter into negotiations until Washington stops issuing threats, he said that the two things are “mutually exclusive.” And in a possible reference to previous US military intervention in the Middle East, he said: “Whoever begins war will not be the one ending it.”

- Sanctions aren't alternative to war; they ARE war

- "Short war" with Iran is an illusion

- Whoever begins war will not be the one ending it

- Negotiations and threats are mutually exclusive

The tweet appears to be in response to statements that Trump made the previous day, claiming that a war with Iran “wouldn’t last very long.” In an interview with Fox Business News, the US leader indicated that he didn’t want war with Iran but that “we’re in a very strong position if something should happen.”

The exchange comes amid escalating tensions between Washington and Tehran. About a week earlier reports emerged that the Trump administration was poised to launch airstrikes against Iran in response to the shooting down of a US drone, but backed down with just minutes to go. Washington claims the drone was shot down in international air space, which Tehran denies, saying the aircraft entered its territory. Previously, the Trump administration also accused Iran of attacking oil tankers in the Gulf of Oman, which Iran also denies.

The tweet was posted a day before Iranian officials are set to meet with European Union member states, along with Russia and China, at a summit in Vienna. The talks are hoped to determine ways to bypass the sanctions reimposed by Washington’s unilateral withdrawal from the Obama-era nuclear deal.