The Americans are in Ukraine - in a big way

Izvestia- translated by Inessa Sinchougova
FortRuss,
24 August, 2017
The Head of the Pentagon, James Mattis is on currently a visit to Kiev.
"If we talk about defensive lethal weapons, we are considering this issue," he said.
According to the US Secretary of Defense, recommendations on this issue will be presented following the visit.
"I will now return to my place of work, and based on what I saw and what I learned, I will, of course, inform the country's leadership about very specific things that I will recommend to implement," he said.
He also said that the US has already approved the supply of military equipment to the Ukraine for $ 175 million.
Earlier, US Senator John McCain said that Mattis's visit to Ukraine opens up the possibility for Washington to begin deliveries of lethal weapons to Kiev. According to McCain, the Ukrainian authorities need such assistance to "protect the sovereignty and territorial integrity of the country."


The senator also said that US President Donald Trump took the first "significant step" to contain Russia by imposing new sanctions against it.

Rusvesna-  translated by Inessa Sinchougova
Fort Russ,
24 August, 2017
The parade in honor of Ukraine's independence with the participation of NATO representatives illustrates a loss of sovereignty said Irina Yarovaya, vice-speaker of the Russian State Duma.
In the center of Kiev on Thursday, a parade in honor of the 26th anniversary of Ukraine's independence was held. For the first time, soldiers from NATO member states took part. The parade was watched by defense ministers who came to the Ukrainian capital from all over the world, including the head of the Pentagon, James Mattis.

"It seems that the procession of NATO symbolizes their personal contribution to the special operation "Maidan" with an unconstitutional coup d'état in Ukraine.
"All that is happening illustrates the already overcrowded chronicle of Ukraine's loss of sovereignty and the transformation into a territory of external governance,"
The deputy said that the invasion of "NATO and the company" began much earlier, "seeds of Russophobia, ignorance and disrespect for the common history of ancestors, ignorance and nationalism" were artificially sown and cultivated in Ukraine.
"The Donbass did not submit to such a policy of self-destruction" Yarovaya concluded. 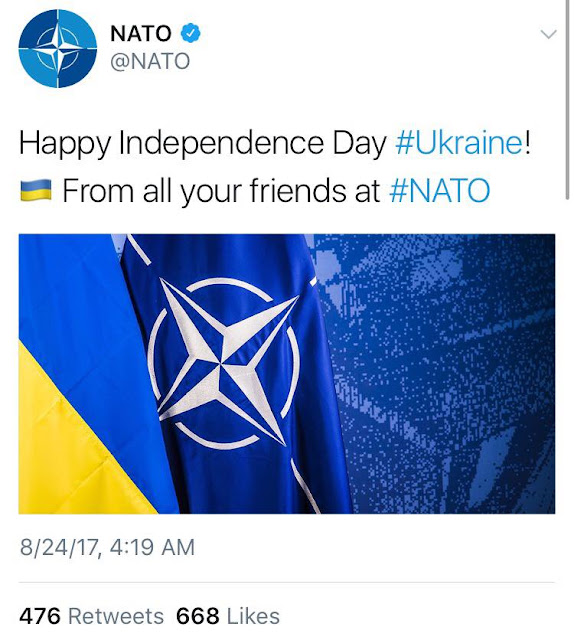