Tropical Storm Harvey, which has dumped more than 51 inches of rain over parts of Texas and flooded hundreds of thousands of homes, intensified this afternoon over the Gulf of Mexico as it continued to move to the North-Northeast.

(Visible satellite imagery of Tropical Storm Harvey late afternoon on August 29th shows the storm slightly re-intensifying before a second landfall with strong rain bands again threatening Houston. Image source: The National Hurricane Center.)
As of the 4 PM CDT advisory from the National Hurricane Center, Harvey’s minimum central pressure had dropped to 994 mb even as its maximum sustained winds increased to 50 mph. This made Harvey a still rather weak tropical storm is it continued to lash sections of Eastern Texas and Louisiana with winds and rains.


Now a 5-day long event since threatening the Texas Coast as a category 4 storm on Thursday,Harvey has produced the worst flooding in Texas state history. In Houston, dams designed to contain a 1,000 year flood are overflowing — increasing already catastrophic flooding throughout the beleaguered city.

(After a brief respite, Houston’s eastern suburbs are again seeing heavy rain from Harvey. Image source: National Weather Service.)
Very heavy rains have fallen over Houston since Saturday. But during the early afternoon hours rains had lightened over the city as the heaviest squalls shifted further east over Beaumont. Recent weather radar imagery from the National Weather Service, however, has shown more intense rain bands again back-filling over Eastern Houston in coordination with Harvey’s recent re-intensification.


Tonight, Harvey is expected to track inland before being pulled northward by a trough and finally leaving Southeastern Texas behind. But not before giving the region one last lashing over the next 12-24 hours or so while dumping another 6-12 inches of rain.
RELATED STATEMENTS AND INFORMATION:

P.S. This is how things look right now. 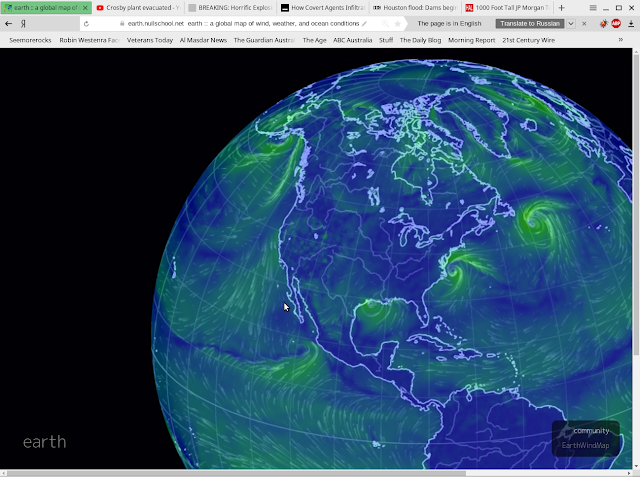