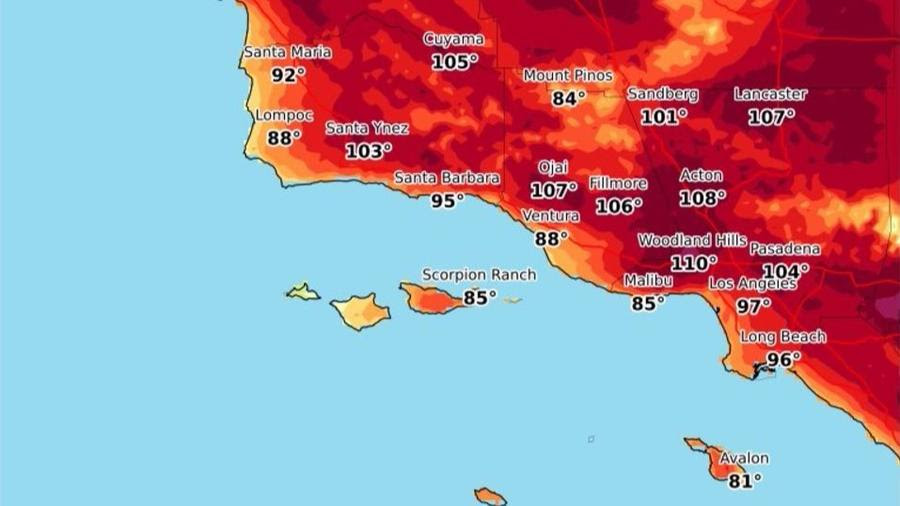 LA Times,
27 August, 2017
Forecasters said Sunday that a record-breaking heat wave will linger in Southern California until at least Thursday.
The National Weather Service said the heat poses a “dangerous situation” and urged residents to take precautions.
On Sunday, the temperatures ranged from the high 70s along the coast and in downtown Los Angeles to 106 in Woodland Hills, 102 in Van Nuys and 116 in Palm Springs. A few records were set for the day Saturday, and the NWS said it appears Paso Robles set a new record for the day Sunday at 108 degrees.
Officials said the hot, dry conditions would heighten the fire risk this week. And the heat is expected to worsen before it gets better.

A large, high-pressure system sitting over the Great Basin in Utah and Nevada, combined with a weak onshore flow and sunny skies, will support the warming trend, said Bonnie Bartling, a weather specialist with the National Weather Service in Oxnard. Forecasters have issued an excessive-heat watch for the region from Sunday morning through Tuesday evening, Bartling said.
Monday through Wednesday are expected to be the hottest days. The valleys, mountains and deserts could see high temperatures of about 108 degrees, Bartling said.
An excessive heat warning is in place from 10 a.m. Monday to 10 p.m. Wednesday.

Triple-digit temps across the region

Woodland Hills, one of the hottest spots in the San Fernando Valley, is forecast at 109 degrees early next week, she said.
Downtown Los Angeles and the coastal areas likely will see high temperatures ranging from the low 90s to about 100 degrees, she said.
Overnight temperatures will remain warm, ranging from the upper 60s to upper 70s across the Los Angeles region, Bartling said.
Palm Springs is expected to be broiling, with a high of 115 degrees forecast for Sunday and a mere dip to 112 degrees Monday, with lows in the upper 80s, according to the National Weather Service in San Diego. Riverside could hit 111 degrees Monday, and Temecula could get up to 105, forecasters said.
Posted by seemorerocks at 17:57