Harvey Moves Back Over Water; Historic Rainfall Will Continue 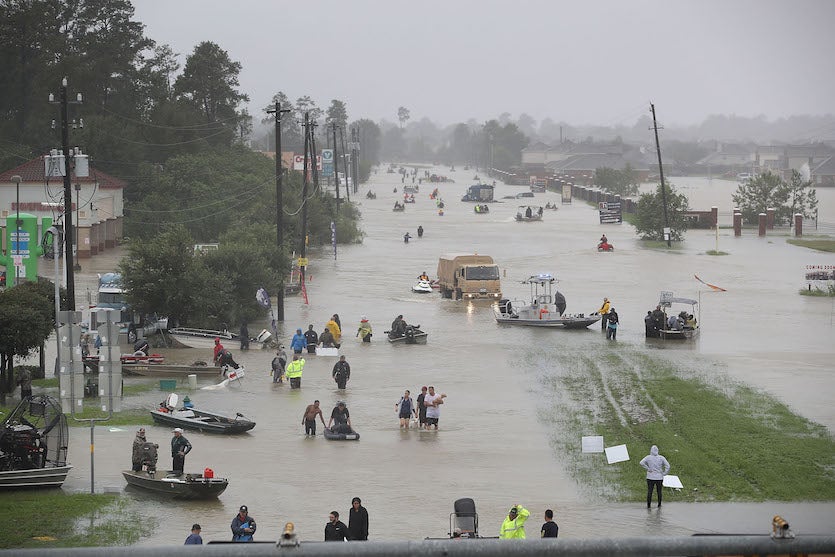 Wunderground,
28 August, 2017
The center of Tropical Storm Harvey edged out over the Gulf of Mexico late this morning, and satellite images and radar loops show that Harvey is responding by building new intense thunderstorms near its center. These thunderstorms will bring renewed rounds of torrential rains to the Houston area through at least Wednesday morning. Houston got a brief reprieve on Monday morning from the heavy rains that have submerged the city, when a slot of dry air to the west of Harvey rotated into the core of the storm and stifled the heavy rains over Southeast Texas. Harvey’s heaviest rains fell instead near the Louisiana/Texas border, where an intense band of heavy thunderstorms fed by Gulf moisture brought 12-hour rainfall amounts in excess of ten inches to three WU personal weather stations near Beaumont, Texas. Rainfall amounts in western and central Louisiana of 4 – 8 inches were common, in the 12-hour period from midnight to noon Monday.

West Houston at risk of dramatic expansion in flooded areas

Over the weekend, flooding covered virtually the entire Houston area. The worst was focused in communities such as Dickinson that lie along the southeastward corridor between downtown Houston and Galveston. On Monday, it is western parts of the metro area where flood concerns are rising to new heights. The main risk involves Addicks and Barker Reservoirs, which straddle Interstate 10 about 15 miles west of downtown Houston, and Buffalo Bayou, which flows from the reservoirs into downtown. Addicks and Barker are “dry” reservoirs: they are not used for routine water storage, only to serve as flood control devices for the downstream city of Houston during extreme events. Nearly all of Addicks Reservoir was drained in the days leading up to Hurricane Harvey, and officials expected the reservoirs this week to exceed record-high levels set during the Tax Day Flood of April 2016 (102.65 feet at Addicks and 95.24 feet at Barker). These records were broken Monday morning: as of 2:15 pm EDT, Addicks was up to 103.65 feet and Barker was up to 98.04 feet.
The increasing flood threat on Monday is a two-pronged one:Buffalo Bayou from the two reservoirs through downtown Houston. The U.S. Army Corps of Engineers (USACE) has been ramping up controlled releases from the two reservoirs throughout the day. By Monday afternoon, USACE was planning to release 4000 cubic feet per second from each of the two reservoirs, which is half of the maximum release rate of 8000 cfs per reservoir. These releases will exacerbate flooding along Buffalo Bayou, where water had subsided slightly by midday Monday. The bayou hit a record-high crest of 69.92 feet on Sunday night at West Bend, beating the record of 68.37 feet from Aug. 18, 1983 (Hurricane Alicia). Just west of downtown at Shepherd Drive, the bayou’s crest of 38.78 feet was in fourth place behind floods in 1929, 1935, and 2001.
Many homes that lie near the west sides of Addicks and Barker Reservoirs. Despite the ramped-up controlled release, water will still be accumulating faster in the two reservoirs than it will be draining out. (Early Monday, the reservoirs were rising at more than 4 inches per hour.) This means floodwater is now beginning to expand west from the edges of the reservoirs toward a number of residential areas, where residents were under non-mandatory evacuation alerts—but many were scrambling to leave on Monday as the water rose. Because the reservoir must be drained at a controlled rate for one to three months following Harvey, the USACE warns that the flooded homes behind the reservoir could be inundated for a long period of time.
The USACE’s delicate balancing act this week, as the rains and inflow continue, is to (a) release enough water to minimize the strain on Addicks and Barker Dams and reduce the risk of westward flooding, and (b) keep the releases controlled enough to limit flood impacts eastward along Buffalo Bayou into highly populated parts of western Houston and downtown. USACE expects water to go over the uncontrolled spillways at the ends of both dams, which is part of the dams’ design for floods of this magnitude.
The two earthen dams were built some 70 years ago in a then-rural part of Harris and Fort Bend Counties that has since seen explosive growth, allowing water to flow more freely over the paved landscape. The dams are now midway through a three-year, $75-million repair and restoration project. Because the reservoirs are typically empty or mostly empty, the dams have experienced a sequence of increasingly frequent on-and-off stresses due to increased development and more-extreme rainfall events in the Houston area. In 2009, the USACE rated the Addicks and Barker dams as being at “extremely high risk of catastrophic failure,” which put them among just six dams in the nation with that designation. It’s important to note that Addicks and Barker have not been considered at imminent risk of failure, according to USACE, who say the designation hinges in large part on the scope of the disaster if failure were to actually occur. As reported in the Houston Chronicle last year, “If the dams failed, half of Houston would be underwater. Under the worst scenario at Addicks, property damages could reach $22.7 billion and 6,928 people could die.” The Houston Press, which published a harrowing in-depth reporton the state of the dams in 2012, filed an update on Sunday.
Another major area of concern is the Brazos River, where levees in Fort Bend County are at risk of being topped and possibly compromised. Mandatory evacuations were issued within the levee districts. Further south, along the Colorado River, the entire city of Bay City (population 17,000+) is under mandatory evacuation orders, effective at 1 pm CDT Monday. Downtown Bay City is at risk of up to 10 feet of indundation, officials said.

There is now a bit more uncertainty about the precipitation forecast for southeast Texas than there was over the weekend, when the ingredients for torrential rain were locked into place. Of course, Harvey’s continued presence near Houston is the main cause for concern, especially since Houston still lies on the “dirty” northeast side of Harvey’s core, where heavy rains are most likely. Complicating matters further is Harvey’s move offshore over the next couple of days. None of the reliable intensity models were calling for Harvey's peak winds to increase above 50 mph in their Monday morning runs, and the type of extended rainbands that punished Houston over the weekend will likely be displaced eastward toward southern Louisiana. However, any reorganization over water could help Harvey re-concentrate very high moisture levels near its center.
On the plus side, a substantial push of dry air at midlevels of atmosphere has wrapped around the south side of Harvey across the Gulf of Mexico. From now through Wednesday, this dry air should continue to work its way around the circulation, and it may help reduce the highest rainfall intensities and thin out the concentration of rainbands to some extent. Nevertheless, the potential remains for extreme rains within a short amount of time, as Harvey may be able to wall off its core circulation from the bulk of the dry air’s influence.
The short-term mesoscale HRRR model, which accurately captured Houston’s mammoth rains over the weekend, has pulled back notably on its projected rainfall amounts in the Houston area. Its most recent runs, produced each hour on Monday morning, were calling for general 1 – 2” rains through early Tuesday with pockets of 2 – 5”. However, the HRRR only goes out 18 hours, and it is not considered the most reliable model for (potentially intensifying) tropical cyclones over water. Another mesoscale model, the nested 3-km version of the NAM, calls for 2”- 4” through early Tuesday in the Houston area, but then another 10” or more across Harris County from Tuesday into early Wednesday before Harvey finally moves on. As with the HRRR, the NAM is not designed for dealing with tropical cyclones over waters. A more reliable resource in a situation like this may be the HWRF model, whose 06Z Monday run predicted  a pocket of 16”+ rains with Harvey’s core across the Houston area, and a localized maximum of 24”+, before Harvey moves out. The 06Z HWRF run also depicted a similar localized maximum in southwest Louisiana associated with the eastward extent of Harvey’s rainbands (see Figure 7.)Update: the 12Z Monday run of the HWRF projected considerably less rain for the Houston area, mostly in the 8" - 16" range.
The bottom line: although there is more uncertainty than we’d like in how much rain will fall across southeast Texas through Wednesday, the higher-end possibilities remain very large for the Houston area, especially for Tuesday into early Wednesday.

On Sunday, there quite a few tornado warnings for Harvey based on Doppler radar signatures, but not many confirmed tornadoes. The Storm Prediction Center logged six preliminary tornado reports on Sunday—two in Texas, and four in Louisiana. Saturday was the big day for tornadoes from the hurricane, with twelve preliminary twisters: ten in Texas, and two in Louisiana. Harvey will likely continue to spin off a few tornadoes each day through Wednesday, but these are likely to be of the relatively weak and short-lived EF0 and EF1 variety. Eight tornadoes were reported on Friday in Texas from Harvey.

The best source of official flood statements and warnings is the NWS/Houston office, including its website and its Twitter and Facebookfeeds. Houston TV station KHOU, whose studios were inundated on Sunday morning (see embedded tweet), has been livestreaming the flood. Space City Weather and the Houston Chronicle are providing excellent local coverage. ABC13 has a roundup of evacuation ordersacross Houston area.
Bob Henson co-wrote this post.