As an indication,I could find no videos to accompany this. Compare that with coverage of Harvey

India, Nepal and Bangladesh are battling some of the worst monsoon rains in recent history, which have left around 1,200 people dead and 41 million people affected. In India more than 32 million people have reportedly been impacted by downpours.
Vast areas of land across all three countries are underwater, according to the Red Cross. “Rainwater from the Himalayas is travelling down through Nepal’s lower-lying areas, through swollen rivers in north-east India and eventually through the floodplains of Bangladesh,” it said in a statement.

A man casts his fishing net in the flood waters next to his partially submerged hut in
Morigaon district in the northeastern state of Assam, India August 17, 2017\

West Bengal is the worst affected area in India, with 152 deaths and 15 million
people affected, according to the UN. The country is struggling to deal with
heavier-than-usual monsoon rains, with more than 600 deaths caused by
downpours.

Guthail, Jamalpur in Bangladesh August 19, 2017
Floods in Mumbai have prompted locals to open their homes to those stranded,
using the hashtag “Rainhost.”
The Mumbai monsoon rains are reported to be the city’s heaviest since 2005.

Women carry children as they make their way through a flooded area in Bogra, Bangladesh, August 20, 2017 © Mohammad Ponir Hossain / Reuters

A woman carries her belongings while walking along flooded area in Gaibandha, Bangladesh August 19, 2017 © Mohammad Ponir Hossain / Reuters
The heavy rains began in mid-August, with more downpours forecast for the coming days. Video and images uploaded to social media from the Chitwan District in Nepal show flooded roads from mid-August.
As the rains continued into late August the situation grew worse, with 143 people killed in Nepal and nearly half a million displaced.

A man riding a scooter rides along an inundated road after a spell of heavy rainfall in Lalitpur,
Nepal on Sunday, August 27, 2017 © Skanda Gautam / Global Look Press 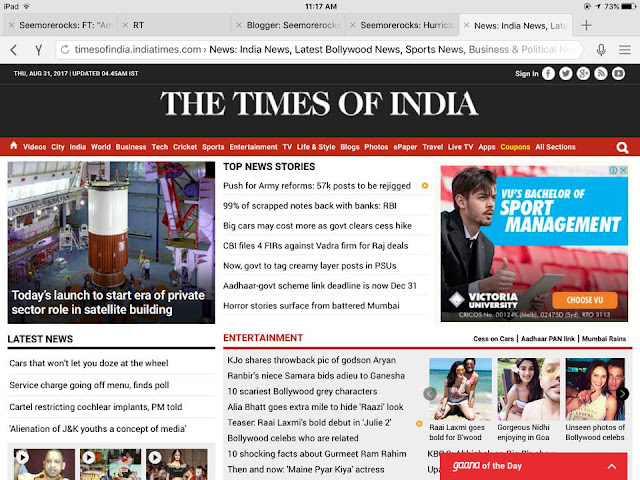 More people are affected by

flooding in South Asia than in

Houston – but you won’t hear about that

More than a third of Bangladesh and Nepal, and large
areas of India have been flooded, and the situation is
expected to worsen as monsoon season continues
through the end of September 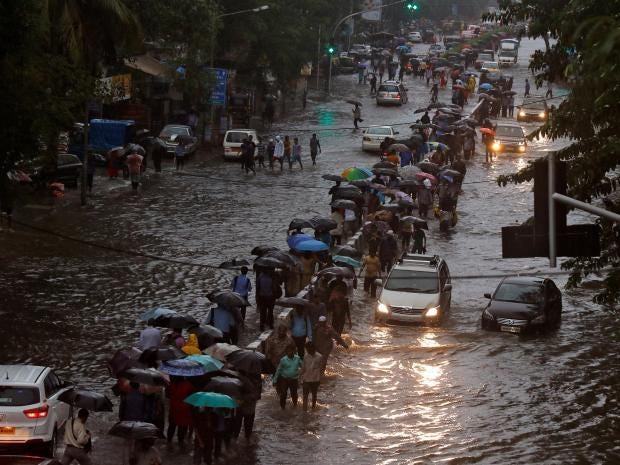 Right now, sustained torrential rain is causing devastation in both developed and developing countries. Hurricane Harvey has displaced tens of thousands of
people in Houston and tragically killed 15. Reports suggest that the rainfall
recorded there, over 50 inches in a 48-hour period, would normally be seen once every thousand years.

You might not have heard but there have been two more destructive floods to have hit this month. Three weeks ago, hundreds of homes and businesses were buried under a mudslide affecting communities around Sierra Leone’s capital, Freetown; and following much heavier than usual monsoon rains, Bangladesh, India and Nepal have been affected by the worst floods in decades impacting on almost 41 million people and killing thousands.

I work from New Delhi and I can tell you first hand the devastation these floods
have wreaked on people here in India – we have been ensuring that cash is
available to buy essentials and making sure local aid workers are delivering emergency food and water to people in need.

As much as the tone of public debate on the topics of the day can frequently
feel as if it focuses doggedly on what divides us, it certainly seems
weather-related devastation is an increasing threat common to all, wherever
you call home.


Heavy rains kill thousands and leave millions homeless in India, Bangladesh and Nepal
However, we have seen less media reporting in the UK on what’s happening in
South Asia then what is happening in Houston, while UK coverage of the
mudslides in Sierra Leone was feverish until Houston changed the news agenda.

Many more people are affected in South Asia than in Houston. So why doesn’t the news follow the numbers?

South Asians, like Texans, are party to annual weather cycles that they expect
and plan to manage. These current weather systems are part of those cycles.
But one reason among several that they are worse this year is that these
weather systems have not moved on as they normally do, allowing water to
drain away. It’s as if a tap was turned on and simply left running over one area.

More than a third of Bangladesh and Nepal, and large areas of India have been
flooded, and the situation is expected to worsen as monsoon season continues
through the end of September.


In media terms, perhaps the perception of the monsoon floods is that they are
just “a little bit worse” than normal – hence, not as shocking.

Yet, millions of people will continue to be affected by climate change in the
developed and developing world. But so very many people in the latter are not
in a position to build or rebuild their homes to withstand these catastrophes.

The situation is most concerning for women and girls. The gender inequality
myself and my colleagues see at work every day across the countries affected by the South Asia floods has taken on new power in this emergency.

Social customs in this part of the world often limit the access females have to
public spaces, meaning that the millions of women and girls affected can’t be
fully involved in obtaining the aid we deliver. That is a more complicated story to
tell, but we need the news agenda to help us compel humanity to help. This isn’t
just an unsurprising monsoon – this is a disaster which is making the lives of women and girls hell.

Thankfully, we are now starting to see media coverage of the devastation in
South Asia facilitated by the coverage of Houston. Quite literally, by adding a
reference to Storm Harvey into a headline for an article that is actually about the
South Asian floods, we see our story appearing in the news, showing that what
is happening in the East is also happening in the West at the same time. If there
is one thing that unites us, it’s climate change: so perhaps our attention and
efforts should be equal