About 3,100 customers went without power earlier in Boyle Heights, but the electricity has been restored there, according to the Los Angeles Department of Water and Power.

Other outages affecting hundreds of customers were also reported in the Sun Valley and North Hills areas.

The outages came after California energy authorities urged voluntary conservation of electricity as a wave of triple-digit heat strained the state's power grid.

The California Independent System Operator issued a flex alert for 2 p.m. to 9 p.m., the period when air conditioners are typically at peak use and consumers should avoid running major appliances. Energy demand for the day was forecast to exceed 48,000 megawatts, which would be the highest demand on the grid so far this year.

The LADWP forecast peak demand of 5,811 megawatts, which would be a record for this year. Numerous locations saw the mercury soar past the century mark.

Woodland Hills topped out at 112 degrees.

Among rural areas, Ocotillo Wells in eastern San Diego County hit 117.
The temperature reached 114 degrees in Lake Elsinore for the second straight day, breaking records for Aug. 28 and Aug. 29, both of which dated back to 1998.

High temperatures in the desert included 116 degrees in Palm Springs, 114 degrees in Thermal and 113 degrees in Indio.

The excessive heat warning is expected to stay in place until 10 p.m. Friday. 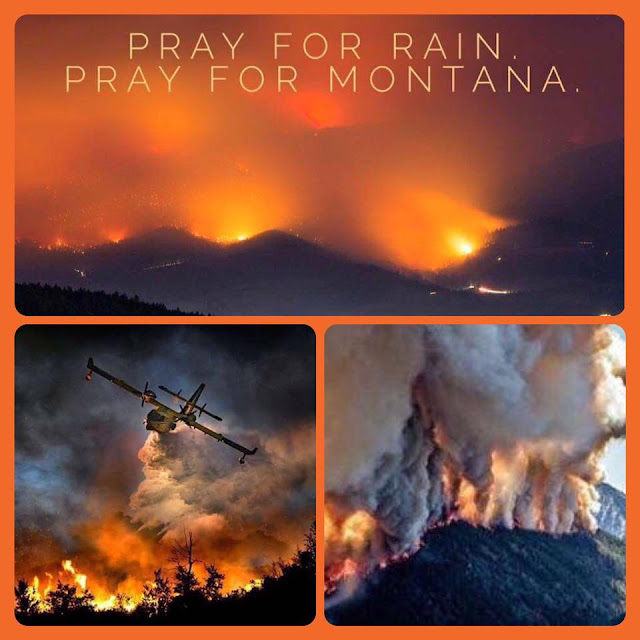 Montana is burning and everyone is ignoring them


As Harvey Moves Inland, A New Hurricane Is Forming Over The Atlantic

According to Jeff Masters, co-founder of Weather Underground, computer forecast models disagree on its ultimate track but a U.S. strike later in September cannot be ruled out.

Irma is the ninth named storm of the Atlantic hurricane season, which also produced Harvey that devastated southeastern Texas, including Houston, and disrupted energy facilities and supplies and destroyed crops. Irma could become a Category 1 hurricane on the five-step Saffir-Simpson scale by Friday and gradually get stronger through Monday.

If its current track holds, Irma would still be bearing down from the east on the Leeward and Windward Islands in the Caribbean Sea Monday

* * *
The National Hurricane Center (NHC) will be initiating advisories at 11 AM AST, as the new area of low pressure in the eastern Atlantic Ocean will develop into Tropical Storm Irma. Tropical Storm Irma will become the 9th storm of the 2017 Atlantic hurricane season as it moves towards the Gulf of Mexico region.

NHC Atlantic Ops
✔@NHC_Atlantic
NHC will be initiating advisories at 11 AM AST on Tropical Storm Irma, located west of the Cabo Verde Islands.

In the near-term, future Irma will bring locally heavy rain and gusty winds to the Cabo Verde Islands through Wednesday.

National Weather Service (NHS) reports Global Tropics Hazards and Benefits Outlook for the next 1-2 weeks. First week, Irma is labeled as a ‘tropical cyclone formation’  heading towards Caribbean Sea and the Gulf of Mexico. Second week, passing inland and over Central America.

"There is the potential to ramp up to a powerful hurricane in the coming days," according to AccuWeather Hurricane Expert Dan Kottlowski.

Irma will take about a week for the system to make its trek westward across the Atlantic Ocean. Meteorologists will likely be tracking this storm through the middle of September.


"All interests in the eastern Caribbean will need to monitor the progress of this evolving tropical cyclone, especially next week," Kottlowski said.

"It is way too soon to say with certainty where and if this system will impact the U.S."

Meanwhile, Texas and now southwestern Louisiana are still dealing with Tropical Storm Harvey.
The weather disturbance has caused a great deal of destruction and cannot afford another storm such as Irma.

This isn't a lake. It's I-10 in Texas after flooding from Harvey