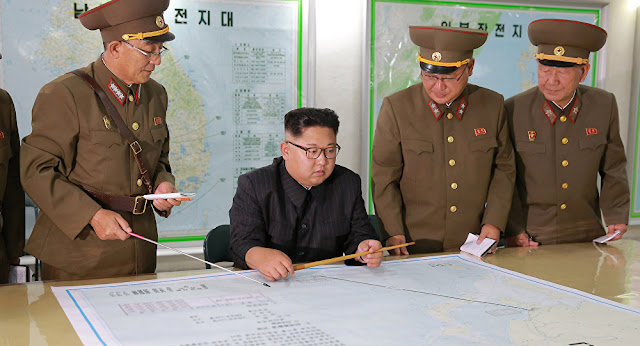 Kim was reportedly onsite for the Hwasong-12 missile launch on Tuesday. The Hwasong-12 is reportedly the projectile Kim has in mind for his threatened multi-salvo attack on Guam, a US territory approximately 3,430 kilometers southeast of the Korean Peninsula.
Tuesday's test-launched missile flew over parts of Japan before dropping into the ocean about 733 miles east of the northern Japanese island of Hokkaido.
North Korea's state-run news agency KCNA has confirmed that the projectile was a Hwasong-12 missile, corroborating reports from the Japanese Defense Ministry.
KCNA also says the missile launch was done to counter the joint US-South Korean military drills launched a week ago, which this year include a 'nuclear war game.'

Coincidentally, Tokyo conducted its first Patriot Advanced Capability-3 (PAC-3) missile intercept defense system on Tuesday in coordination with US forces at the US Air Force post at Yokota Air Base in western Tokyo and at the US Marine Corps Air Station Iwakuni in Japan's Yamaguchi Prefecture.
Following the latest launch, US President Donald Trump declared that "all options are on the table" regarding what South Korea, Japan and US forces might do in response.

The White House said Trump and Japanese Prime Minister Shinzo Abe spoke about the situation and concurred that the DPRK "poses a grave and growing direct threat" to the US and its allies South Korea and Japan.
North Korea has test-launched dozens of ballistic missiles since Kim Jong-un took power, and conducted two nuclear tests in 2016. Earlier this month, it was revealed that some Japanese and US intelligence analysts believe Pyongyang may already be able to attach a nuclear payload to a ballistic missile.

Japan, South Korea Bare Fangs Over Daring North Korean Missile Test
In the early hours of Tuesday, North Korea conducted their second missile test in four days and one of their most daring yet: a ballistic missile sailed over Japan and landed in the sea on the east side of the archipelago. Japan and South Korea have reacted by flexing their military muscles and tightening ties with the United States.

North Korea, Is A Major Conflict Headed Our Way