Arab states give Qatar an ultimatum

A demand by Saudi Arabia and its allies to shut down the Al Jazeera Media Network has been rejected by the broadcaster and condemned by international media groups. 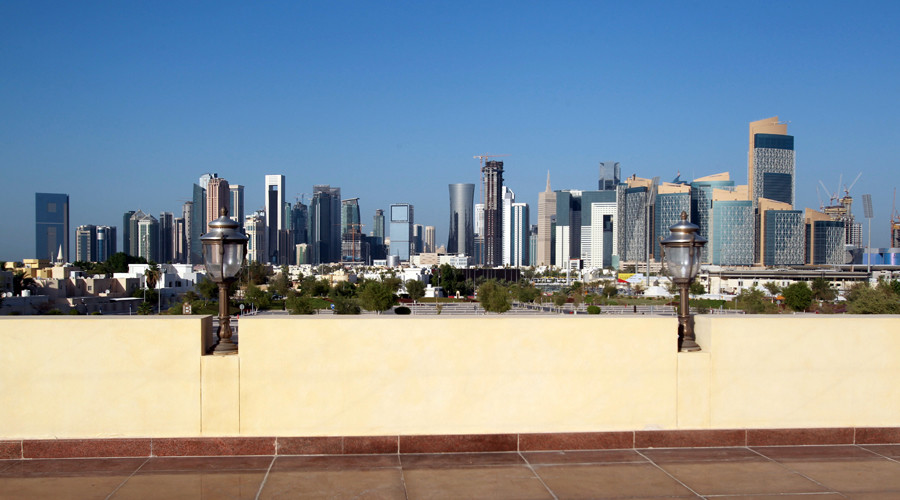 Qatar says the list of 13 demands put forward by the Gulf nations and Egypt as a precondition for the resumption of diplomatic ties and much needed economic relief is neither “reasonable” nor “realistic”, and infringes on the country’s sovereignty and foreign policy.

“This list of demands confirms what Qatar has said from the beginning – the illegal blockade has nothing to do with combating terrorism, it is about limiting Qatar’s sovereignty, and outsourcing our foreign policy,” Sheikh Saif Al Thani, director of Qatar’s government communications office, said in an email statement to Bloomberg.

The Sheikh stressed that the list is currently under review, but only“out of respect for our brothers in Kuwait,” whose emissary delivered the Saudi-led demands Friday. Al Thani noted that the demands do not meet the US and UK criteria for “reasonable and realistic measures.”

Qatar’s Foreign Ministry says it will soon issue an official response.
“The State of Qatar is currently studying this paper, the demands contained therein and the foundations on which they were based, in order to prepare an appropriate response,” the ministry said, according to Channel News Asia.

On Friday Saudi Arabia, Egypt, Bahrain and the United Arab Emirates – which accuse Qatar of sponsoring terrorism – issued a list of 13 stringent demands, which among other things, require Doha to cut ties with Iran, shut down its Al Jazeera news outlet and close the military base which houses Turkish troops in the country.

“We in the network believe that any call for closing down Al Jazeera is nothing but an attempt to silence the freedom of expression in the region and to suppress people's right to information,” Al Jazeera said in a statement.

“By accepting those demands and conditions Qatar will be subject to international accountability and violating its commitments regarding human rights conventions,” Qatar's National Human Rights Committee said in a statement cited by Reuters.

READ MORE: Turkey has no intention of closing Qatar base despite Saudi ultimatum

Doha has been given ten days to comply with the ultimatum, otherwise, the Saudi-led nations will continue their diplomatic isolation and economic blockade of the country which began on June 5.

UAE’s State Minister for Foreign Affairs urged Qatar to meet the demands. “It would be wiser that [Qatar] deal seriously with the demands and concerns of the neighbors or a divorce will take place,” Anwar Gargash said on Twitter in Arabic, adding, that “the crisis is profound.”

Meanwhile, Washington which previously questioned the motives of the diplomatic fall out said it is up to the parties involved to solve the stalemate.

“We believe it is a family issue” White House press secretary Sean Spicer said Friday. “This is something they want to, and should, work out for themselves.”

Amid the flurry of diplomatic activity, the United Nations has offered its assistance in mediating the conflict.

“We hope that the countries involved resolve the situation through dialogue,”said UN spokeswoman Eri Kaneko, as quoted by the Inquirer. “We are ready to assist if requested by the parties.”

The crisis was triggered in early June following a report on the state run Qatar News Agency (QNA) website and social media accounts, in which the country’s Emir, Tamim bin Hamad Al Thani, criticizes Saudi Arabia’s anti-Iranian rhetoric among other controversial statements. QNA immediately retracted what it termed “fake news,” and following an investigation, said the channel had been hacked by “neighboring” states which then used the QNA report as a pretext to impose the economic blockade.

The Saudi-Qatar Spat - An Offer To Be Refused

Today the Saudi ruler issued an ultimatum to Qatar that was written to be rejected. Such has happened before and one should not forget the lessons to be learned from it.

After the crown prince of the Austia-Hungary monarchy Archduke Franz Ferdinand, was shot and killed in Sarajevo the government of Austria waited three weeks to issue a 10 point ultimatum to Serbia which it held responsible for the incident. At least three of those points concerned the suppression of "propaganda against Austria-Hungary" and the Austrian Monarchy by private and state entities. It demanded a response within two days:

Sir Edward Grey, the British Foreign Secretary, commented that he had "never before seen one State address to another independent State a document of so formidable a character."

The Austrian ultimatum was an offer to be refused. But Serbia did not fall into that trap. It conceded on everything but two minor points. This was to no avail. The issues and plans Austria had were not about the assassination of [the disliked] Franz Ferdinand or the demands issued in the ultimatum. Two days later Austria-Hungary declared war against Serbia. Allies jumped to either side. World War I had started. The now official demands by Saudi Arabia, the United Arab Emirates and some minor Gulf sheikdoms against Qatar have a similar smell to them. They are also "an offer to be refused."
The demands come late, three weeks after Saudi Arabia first accused Qatar of "supporting terrorism", three weeks after it closed the border and laid siege on the country.

(Qatar is surly "supporting terrorism". So is the U.S. - the U.S. Citizenship and Immigration Services just rejected an asylum request because the person in question has relations with the Free Syrian Army which the C&I-Service considers to be an "undesignated terrorist organization". The CIA built and supports the FSA. According to the U.S. government the U.S. government is a state sponsor of terrorism. But the biggest terrorist sponsor of all are and have been the Saudis.)
Spats between member of the Gulf Cooperation Council are usually mediated by the U.S. government. But without any official demands issued against Qatar there was nothing to mediate about. Three day ago U.S. Department of State finally issued a rather angry statementtowards Saudi Arabia:

"We are mystified that the Gulf states have not released to the public, nor to the Qataris, the details about the claims that they are making toward Qatar," explained State Department spokesperson Heather Nauert on Tuesday.
...
"At this point, we are left with one simple question: Were the actions really about their concerns about Qatar's alleged support for terrorism, or were they about the long-simmering grievances between and among the GCC countries?" Nauert asked.

The real issue for Saudi Arabia is the support for the Muslim Brotherhood by Qatar. The MB provides an alternative model of Islamic government to the hereditary kingdoms of the Gulf sheiks. They are a danger to the Saudi ruling family. A second point are Qatar's relative good relations with Iran, the external enemy the Saudis (and Israeli) rulers need to keep their people in line.
The "terrorism" accusation was never the real issue. What the Saudis demand is subjugation. A summary of the thirteen points:

In effect, Saudi Arabia, the UAE, Egypt and Bahrain are asking Qatar to hand over control of its foreign policy to them. It will not be allowed to have diplomatic relations with Iran and its contact with Iran will be limited to trade and commerce that “complies with US and international sanctions”. Qatar will not be allowed contact with political opposition figures in Saudi Arabia, the UAE, Egypt and Bahrain — even though other countries (including western countries) do so routinely. In addition, Qatar is being asked to hand over all its files on those opposition groups.
...


Qatar is also being asked to “end interference in sovereign countries’ internal affairs” while allowing Saudi Arabia, the UAE, etc, apparently unlimited interference in Qatar’s own affairs. Qatar, according to the list of demands, must “align itself with the other Gulf and Arab countries militarily, politically, socially and economically”.

Then there’s the closure of Qatar’s TV station, al-Jazeera. Obviously, the Saudis, Emiratis, etc, don’t like it. ... Qatar is also told to stop funding several other news organisations, including Middle East Eye and al-Arabi al-Jadeed (also available in English as The New Arab).
...

Finally, Qatar is being asked to sign blank cheque covering “reparations and compensation for loss of life and other, financial losses caused by Qatar’s policies in recent years”.

The Saudi ultimatum ends on July 3, the anniversary of the Saudi sponsored military coup against the Qatar backed Muslim Brotherhood government in Egypt.
One demand in the ultimatum is for Qatar to end all support for the Brotherhood. The ultimatum will likely be rejected. Qatar will simply not respond until the Saudis and others lift their blockade of the country.

If the Saudis want war they should launch it right away, the Qatari ruler thinks. Doha is sure that the U.S. will not allow that. Ten-thousand U.S. troops are stationed in Qatar. It hosts a major air base and the important Central Command, which leads the war against ISIS and Syria. Qatar just bought U.S. fighter jets for $12 billion and is offering to take a 10% share of American Airlines.

Turkish troops have arrived to protect the sheikdom. One unexpected Saudi demand is that all Turkish troops leave Qatar. The Erdogan government, a Muslim Brotherhood branch, responded with a snippy "Make me do so."

Turkey’s Defense Minister Fikri Işık rejected the demand, saying any call for the base to be shut would represent interference in Ankara’s relations with Doha. He suggested instead that Turkey might bolster its presence.

There is no "or else" in the Saudi ultimatum. The Saudi ruler, the clown prince Mohammad bin Salman, is not a strategist. He likely has not thought through what he could do should Qatar says "no" to him.

The Trump administration is considering a Camp David-style summit to solve the conflict:

“The president now wants to bring all the key players to Washington,” he said. “They need to disavow groups like the [Muslim] Brotherhood for the stability of the Middle East at large. It’s not just about Qatari elements funding the Brotherhood but disavowing support for extremism in general,” [a senior White House official] said.

The real issue for the Trump administration is to unite the GCC behind its plans against Iran. There is only a small chance that such can be achieved. Iran is an important commercial partner for Kuwait, Qatar, the UAE and Oman. Those countries have nothing to win from any war with it.

So far Iran is the sole winner of the GCC spat. Should the Saudi blockade of Qatar continue Iran's farmers will sell over 400,000 tons of food per year to Qatar. Steel and concrete are other potential exports products for Iran. Lucrative air traffic in Iranian air space has increased by 17% since the Saudis blocked Qatar Airlines flights through their airspace. Iran will sell more natural gas should Qatar's gas exports be damaged.

As longer this goes on as better for Iran and its allies. The Saudis and Emiratis surely did not think of this when they launched their belligerent plans. The had hoped that Qatar would fold within a day or two. One or two years is now the more likely time frame.