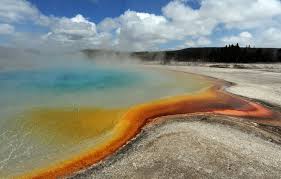 
Over 800 earthquakes have now been recorded at Yellowstone supervolcano over the last two weeks, with the ongoing swarm taking place on the western edge of the National Park.

But there is virtually no risk of the volcano erupting, the United States Geological Survey (USGS) currently lists the volcano alert level as normal and the aviation color, which lists the potential risk to fights, is at green.

The current earthquake swarm began on June 12. A week later, the USGS put out a statement to say that 464 earthquakes had been recorded, with the largest being magnitude 4.4 “This is the highest number of earthquakes at Yellowstone within a single week in the past five years,” it said.

At the time, a spokesperson for the USGS told Newsweek activity appeared to be “slowly winding down,” adding that “no other geological activity has been detected.”
tos
However, in a newly released statement about the ongoing swarm, seismologists from the University of Utah said 878 events have now been recorded at Yellowstone National Park.

The University of Utah is part of the Yellowstone Volcano Observatory (YVO), which provides long-term monitoring of earthquake and volcanic activity in and around Yellowstone National Park. Jamie Farrell, Research Professor at the university, said that as of June 26, 878 events had been recorded as part of the ongoing swarm.

An earthquake with a magnitude less than zero is a very small event that can only be detected with the extremely sensitive instruments used in earthquake monitoring. 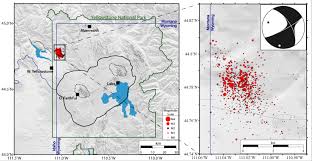 Location of the earthquakes that are part of the swarm as of June 26.
University of Utah

While increased seismic activity can signal a volcano is about to erupt, the latest earthquake swarm is no cause for concern. Jacob Lowenstern, the scientists in charge of the YVO at the USGS, tells Newsweek the swarm has slowed down considerably, and that larger swarms have been recorded in the past.

“The swarm in 2010 on the Madison Plateau lasted at least three weeks.  In 1985, there was one that lasted several months,” he says. “Yellowstone has had dozens of these sorts of earthquake swarms in the last 150 years it's been visited. The last volcanic eruption within the caldera was 70,000 years ago. For magma to reach the surface, a new vent needs to be created, which requires a lot of intense geological activity.

“The volcano alert level remains at green. As outlined in our response plan, USGS Circular 1351, we would need to see considerably more and larger earthquakes, combined with contemporaneous ground deformation, steam explosions, and changes in gas and heat discharge prior to moving the alert level. None of that has occurred.”

The USGS says the current risk of an eruption at Yellowstone is one in 730,000. Furthermore, if it were to erupt, the eruption produced would probably be fairly inconsequential. Lowenstern explains: “If Yellowstone erupts, it's most likely to be a lava flow, as occurred in nearly all the 80 eruptions since the last ‘supereruption’ 640,000 years ago.  A lava flow would be a big deal at Yellowstone, but would have very little regional or continental effect.”