End of isolation despite sanctiosn for Russia 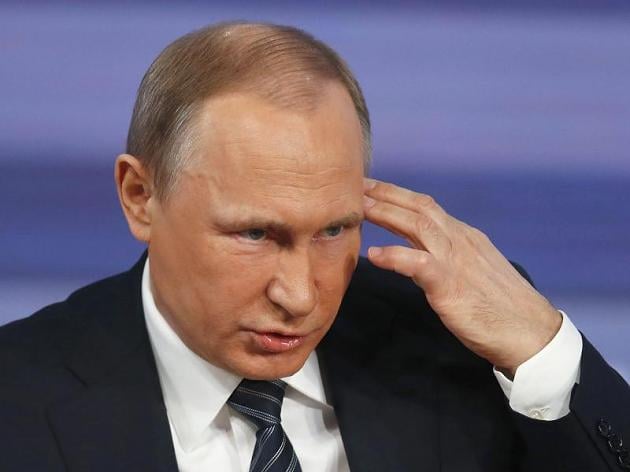 It was the time when Western politicians are collectively saying about the "isolation" of Russia. Now Western and Eastern capitalists compete with each other, submitting applications for purchase of bonds of the Russian Federation.

Putin "laughs in the face of the West" (Putin lacht ins Gesicht dem Westen), believes Holger Scheetz. Why is he laughing, he told a journalist in the newspaper "Die Welt" .


To the chagrin of Western politicians, the latest attempt by Russia to find the money from international investors had "great success", says the author.

Probably, Vladimir Putin may believe his luck. The President of Russia has scored a major victory. Until recently, Putin was practically impossible to get a loan from anyone. Recently "Empire" Putin was suffering from a crisis caused by the Western response to the annexation of Crimea and the fall in world oil prices. Simultaneously with the decrease of revenues from oil trade for the Kremlin has become almost impossible to obtain financing in the international capital markets.


But Putin was able to change: he found new investors, indicates Scheetz. Just at a time when relations between the Kremlin and the White house reached a low point since the end of the cold war, Western investors were once again "willing to give money" to Moscow. The Kremlin gave a plus: financial markets gave Russia three billion dollars, writes, Scheetz. At the same time, Moscow will not stop: it is about raising up to $ 6.6 billion from international investors.


This is a symbolic "show of force the Russian," and she "can't fail", says the journalist. Judge for yourself: no sooner had the Americans to toughen sanctions against Russia, as the Kremlin, after some two hours, placed bonds on the markets. Moreover, the sale was carried out not by some Bank, and the state VTB Capital, which is included in the sanctions lists on both sides of the Atlantic. This Bank has organized placement of bonds.


So, Russian should celebrate the success. It is a victory of economic reason over geopolitical constraints. Andrey Kostin, CEO of VTB, says: "the World of investors decided that sanctions are not a decisive factor, if the conditions are attractive".


Investors actually received these attractive conditions. Columnist recalls that during the placement of Russian bonds compared with transactions in Germany or the United States had proposed a much higher interest rate. Over the ten-year dollar-denominated bonds Moscow pays a coupon of 4.25 percent, or about two percentage points more than allow the beneficiaries to U.S. Treasury bonds. For 30-year debt securities investors receive 5.25 per cent — and this is the real "prize" in the amount of 2.5 percentage points over US Treasuries.

85% of buyers of Russian securities to foreign investors. More than a third of them from the United States, about 30% from the UK. However, Eurozone countries behaved very reserved. Only nine per cent of debt securities were sold to Russian investors from these countries.

Development of financial events shows that the Kremlin can bypass Western sanctions just "playing", says Scheetz. On the other hand, the US government last year warned about the involvement of investors in the purchase of such bonds.


With the current bonds, many investors refused to accept the transactions involved. "We have no right to trade with VTB" — said the publication "Bloomberg" portfolio Manager "Union Investment Privatfonds GmbH". The Fund considers "strict rules" imposed sanctions.


However, the successful placement of the bonds marks a turning point in the financial markets, says the German journalist. Since Moscow's relations with the West deteriorated significantly in the spring of 2014 ("the beginning of the Crimean crisis"), Russia has received "political premium" for the risk. Even when sanctions against individual companies and officials have not yet been finally adopted, Russia "was virtually isolated from the markets." This happened because the financial markets constitute a "helper" of Western policy.

Now Putin has returned the country to embrace large investors. Despite the low price of oil, financial traders believe that in Russia the risk of insolvency is only 11%. This is due to the fact that the economy of the Russian Federation again began to grow. At least this is the case in recent months. The economy has emerged from recession this year, GDP could grow by 1.2% and next year by 1.6% (analyst estimates). The country's foreign reserves amount to more than $ 400 billion vs $ 50 billion (at least 2015). However, the new anti-Russian sanctions can change the situation.

Today Putin "can enjoy financial success", concludes the author.
Thus, add, Russia, despite Western sanctions, acted as an attractive borrower in the foreign market. The capitalists could not miss out on great deals and a pretty high percent.

The total volume of the collected bids totaled more than 6.6 billion. but the proposal received more than two hundred investors. Incidentally, as recalled by "Nezavisimaya Gazeta" , the payment of coupons on both bonds will be held every six months.

The optimistic data coming GDP growth Russia leads the rating Agency "Fitch". "NG" indicates that at the beginning of last week it announced expectations for the Russian economy: the growth of the latter should be in 2017, and 1.6%; the growth of GDP in the next two years even exceeds 2%.

The Russian financial experts have no special optimism about the sale of bonds do not.

The output of the government of Russia on the external market of foreign currency loans was held with a record low turnout of investors from the EU, according to the portal Finanz.ru .

The first issue of bonds (ten-year) one-third went to investors from the UK, 22% was bought by the Americans, and another 30% was bought by Russian banks.

Funds from the EU (excluding the UK) bought only 6%. Their share was comparable with attachments from Asia, said the head of debt capital markets, VTB Capital Andrey Solovyev.

Sanctions act, and act harshly. "I'm not allowed to trade with VTB, — quotes the edition of Eric Vanraes, investment Manager "EI Sturdza Investment Funds" for the bond funds in Geneva. — It would have been very different if I were the co-organizers. We must strictly comply with the sanctions. We exclude contacts with Russian brokers mentioned in the sanctions list."

For the "attraction" of foreign investors in Russia every six months will pay interest, which would place an additional burden on the economy. Burden, among other things, currency. Which will put pressure on the shoulders of not only present generations but also future. The Council of the European Union officially prolonged economic sanctions targeting specific sectors of Russia’s economy by six months until January 31, 2018, according to a statement published on Wednesday.

This decision follows an update from French President Emmanuel Macron and German Chancellor Angela Merkel to the European Council of June 22-23, 2017 on the implementation of the Minsk Agreements. "This paved the way for the renewal of sanctions for a further six months," the statement said.

"The Council formalised this decision today by written procedure and, in line with the rule for all such decisions, unanimously," it read.