How the Trump Dossier and the Syrian Crisis caused Russiagate

WaPo's Latest RussiaGate Story Is an Enormous, Treasonous Turd
The people involved in perpetuating RussiaGate are guilty of things far worse than anything Russia is accused of doing. They are knowingly inciting a civil war even as their narrative continues to fall apart. 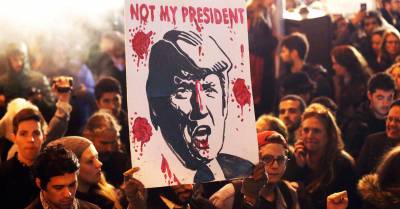 The Washington Post, a wholly-owned subsidiary of the U.S. Deep State, published what may be the most detailed half-truth I’ve ever read. This account of the Obama Administration’s handling of an intelligence report with substantive ‘proof’ that Russia hack the U.S. presidential election reads like a Tom Clancy novel.

It’s a compelling story that will take in the uncritical reader until the moment where the writers refuse to divulge what intelligence report they are talking about. It goes from Tom Clancy’s Hunt for the Red Hack-tober to another chapter in Twilight of the American Gods.

In other words, tl;dr.

Because, as others have already pointed out, the only document this WaPo article could be talking about is the patently absurd Trump Dossier. You know the one John McCain bought from Evan McMullin which details Trump’s alleged lewd behavior in a Moscow hotel with a hooker.
Yeah, that one.

This ‘intelligence report’ was so compelling it took months of arm-twisting to get anyone outside of CIA Director James Brennan’s office to even tepidly endorse it.

This type of reporting is a classic example of the best lie contains a kernel of truth. I remember reading a similar article in 2015 about the rise of ISIS from the New York Times a friend sent me. It laid out in spectacular detail what ISIS was, where its ideas came from and all of that. Compelling stuff and it made you want to support getting rid of them at all costs.

The problem was, it conveniently forgot to mention what gave ISIS its start.

It never asked the most salient question, “How did this group manage to get enough weapons to wage war across two continents?”

Both of these articles are like coming into a movie late and missing the inciting incident.

The goal here is to overwhelm you with facts and quotes, telling the human side of the response to what precipitated this story without knowing the truth about what started the whole farrago.

This is the worst kind of disinformation. It purports to be investigative journalism but it is nothing but misdirection, designed to shift blame and allow the reader’s imagination and normalcy bias fill in the rest.

The end result, in the case of RussiaGate, is to foment a civil war in the United States and overthrow a democratic election on the grounds that it was illegitimate. And if there was any real proof of collusion between the Trump campaign and Putin’s intelligence services to undermine the election, then I would consider his removal from office.

There is only the wholly discredited Trump Dossier and the existential fears of specific members of the U.S. Deep State *COUGH* John McCain *COUGH* that will land them indicted for espionage at a minimum or treason at worst.

Because, the dissemination of knowingly false intelligence to undermine the efficacy of our intelligence services in support of personal political goals is a betrayal of the U.S. at its highest level.

To double down and create a massive conspiracy to move a significant portion of the electorate towards insurrection and violence goes far beyond anything the Rosenberg’s did.

And we hung them.

The people involved in perpetuating RussiaGate at this point are acting far worse than anything Russia is accused of doing. They are knowingly inciting a civil war even if their narrative continues to fall apart.
It is the only way to avoid their fate.

The damage done to our democratic process will be felt for a generation or more. The hard-left Democrats and Progressives who need to believe this lie will cling to it as their raison d’tre; donning their vagina hats, black masks and hijabs to march against the Putin Puppet in Chief.

Stephen Colbert and Rachel Maddow will help them tamp down any misgivings they may have after the sun goes down.

All the while the Deep State continues on pushing for global control and potential world war.

As Putin rightfully points out in his interview with Oliver Stone: “Presidents change, but the policy doesn’t.”

Washington Post confirms Trump Dossier caused Russiagate, triggering demands within an Obama administration humiliated at being bested by Russia in Syria for a massive showdown with Russia.
Posted by seemorerocks at 11:18