A hidden crisis: The search for water sources in Wellington

I have written about our local problems with water. From plenty to potental shortage.

I is not only the effects of last year's earthquake but of shortage through abrupt climate change, something that, up to now has gone completely unacknowledged, except by a few people with plenty of commonsense.
The death of pure water in Lower Hutt 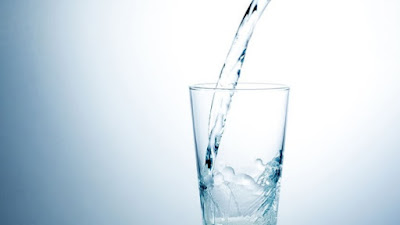 Wellington's fragile freshwater supply is set to become less of a worry, with hydrogeologists looking for emergency supplies under the city. 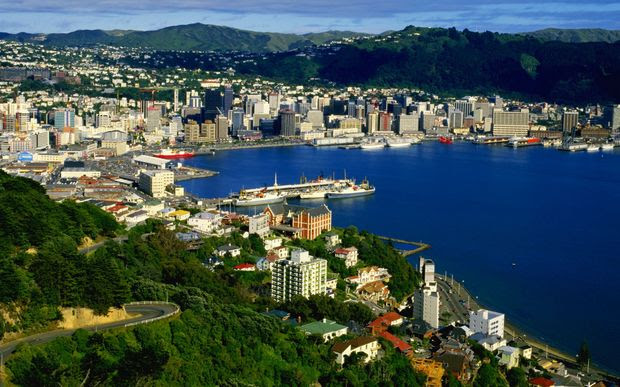 After a big earthquake, it could take up to 100 days to reconnect water supplies to central and eastern parts of Wellington - unless new sources can be found. Photo: CORBIS

November's 7.8 magnitude Kaikōura earthquake exposed Wellington and Porirua's reliance on feeder pipes to deliver fresh water from other centres, with the pipes crossing over fault lines in multiple places.

That fragility means central and eastern parts of the capital could wait up to 100 days for water supplies to be reconnected after a big quake.

To ease the pressure, Wellington Water is investigating 11 possible sites for emergency water bores in Porirua and Wellington, and 11 stream catchments.
Later this week, it will also start drilling into the Waiwhetu Aquifer under the harbour, off the northern tip of the Miramar peninsula. 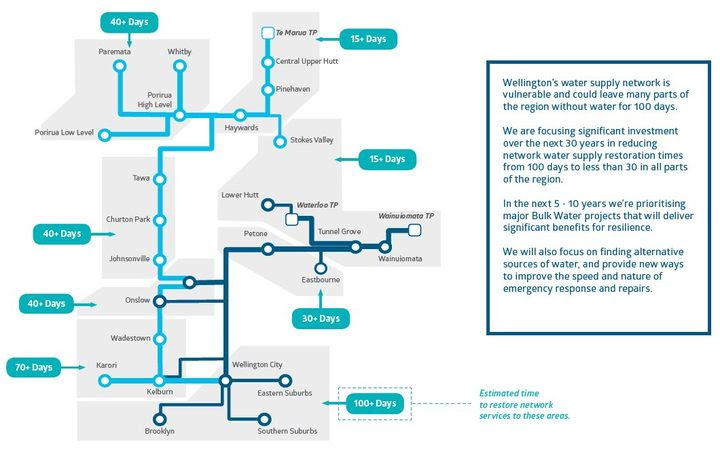 Wellington Water chief executive Colin Crampton said the projects would improve the city's resilience.
"After a major earthquake, the water supply will stop. Even though it's a great source, our early settlers built a lot of that infrastructure over known fault lines," he said.

"One of our critical jobs... is to address the 100 days in the eastern side of Wellington.

"This morning we sent a drill rig out into the harbour, and the idea there is if the aquifer does indeed go all the way out through the harbour and to the entrance, we should be able to drill down and find water. It should be of the right quality and quantity to provide an alternative source."

The 11 bores around the city would be completed within the next 18 months. 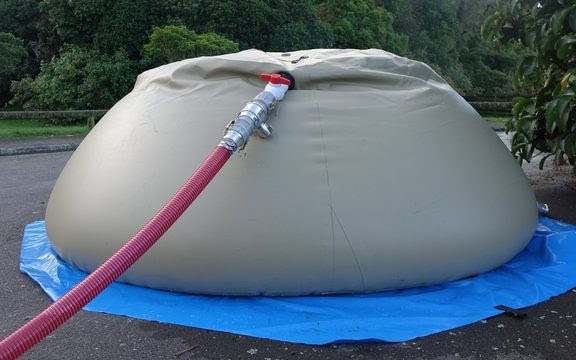 In an emergency, utes will fill bladders with water for people to access. Photo: RNZ / Michael Cropp

In an emergency, utes would fill 1000L water bladders from the bores, and carry that water to 300 sites across the region.

That would ensure no one had to walk further than 1km, or 500m in hilly areas, to collect 20L of water a day.
The project is expected to cost about $12 million, $6m of which is coming from the government.

"This part of [Wellington Water's] project was quite urgent, and we felt that, as central government, it was something we could actually partner with them. We're always worried about setting a precedent, we don't want to be working with all local government around New Zealand, but these two cities - Porirua and Wellington - had no local water supply.

"It made sense that we went in partnership with them to provide these community based supplies," Mrs Tolley said. Despite the planned bores, Civil Defence Minister Nathan Guy said everyone needed to make sure they had enough water stored at their houses for the first seven days.

"This is important, but it's not the be-all and end-all. Ultimately it's down to personal responsibility," he said.

Wellington Chamber of Commerce chief executive John Milford said the effects of the capital losing water would bring the community to a halt and stop many businesses from operating.

"We've got to ensure supply, and furthermore that we can get back to 'business as usual' as quickly as possible.

"We commend both central and local government for working together to secure, strengthen and safeguard our region's resilience," he said.