BREAKING: US drone shot down by Russian S-300 off coast of Syria 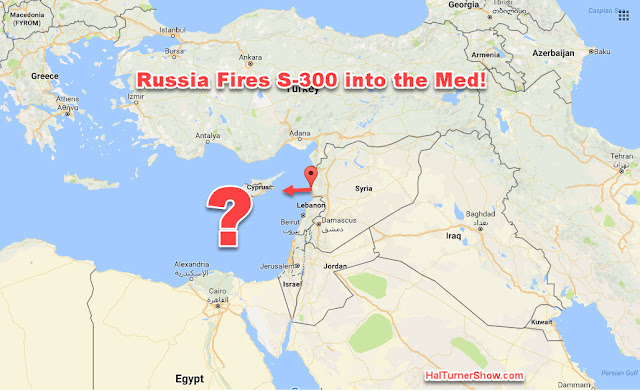 UPDATED - SEE BOTTOM -- Within the past few minutes, Russia/Syria fired an S-300 surface-to-air missile from a base at Tartus, Syria, westward out into the Mediterranean Sea.

The S-300 is one of the most fearsome, accurate, and deadly interceptor missiles in the world.  It does not miss.
No word yet on what has been shot down.

The Pentagon confirms the aircraft carrier USS George H.W. Bush is operating in the Mediterranean and has aircraft which are airborne conducting flight operations. No indication at all if the Bush or any of its planes were the target for the missile launch.

Still not one word about what was fired upon or shot down.   Checking all my sources repeatedly. .

Reports are now coming in that a United States Air Force EQ-4 "Global Hawk" drone was shot down over the Mediterranean Sea off the coast of Syria, by a Russian S-300 surface-to-air missile fired from the Russian Base at Tartus, Syria.
I contacted the Pentagon Press Office after-hours phone via Text message to seek their comment(s) for this story, but they did not reply.
The EQ-4 with a wingspan of more than 130 feet, (roughly the same as a 737 airliner) is the the Air Force's largest drone.

The Air Force has more than 30 RQ-4 surveillance drones, but only three EQ-4s fitted with Northrop Grumman's Battlefield Airborne Communications Node (BACN).
BACN is a high-altitude, airborne communications and information gateway system that maintains operational communications support 24 hours a day, seven days a week. The persistent connectivity that BACN provides improves situational awareness and enables better coordination between forward-edge warfighters and commanders. BACN bridges and extends voice communications and battlespace awareness information from numerous sources using a suite of computers and radio systems.
After the BACN payloads have been integrated on Block 20 Global Hawks, the aircraft are designated as USAF EQ-4B unmanned systems, providing long endurance and high persistence gateway capabilities.
All of the EQ-4 aircraft are assigned to the 386th Air Expeditionary Wing based at Al Dhafra Air Base in the United Arab Emirates.

If this information that the Russians shot down an EQ-4 Global Hawk is accurate, then US Troops operating on the ground with Syrian "Rebels" will no longer be able to INSTANTLY talk to nearby air support as was done a few days ago, when a US F/A-18 was called-in to attack and destroy a Syrian Arab Army Air Force fighter jet.
This type of shoot down would severely hamper US future operational ability in Syria because there are only a total of three EQ-4's in existence.
To outfit one RQ-4 with the BACN (thereby turning it into an EQ-4) costs about twenty-two million dollars.
Such a shoot down by Russia would be pricey retaliation over the US Shoot-down of a Syrian Jet, without causing the US to feel a need to avenge anything; like a pilot.
As shown below, the cost of a Global Hawk Drone is a MINIMUM of $131 Million, but with R&D, the Unit Cost can be as high as $222 Million -- plus the BACN for another $22 Million.

It would send a Russian message to the US not to shoot down anymore Syrian government aircraft.
If the Pentagon Press office responds to my inquiry, this story will be further updated.

Russia Shoots Down US Drone Near Syria

Reports are coming in From Russian and Polish News that Russian military has shot down a US drone off the coast of Syria. In a second report Russian news claims as many as 6 drones have been shot down between Idlib and Latkia close to the Russian Base in Syria. It is believed that the drone shot down over the Mediterranean Sea was a Global Hawk valued at 222 Million dollars 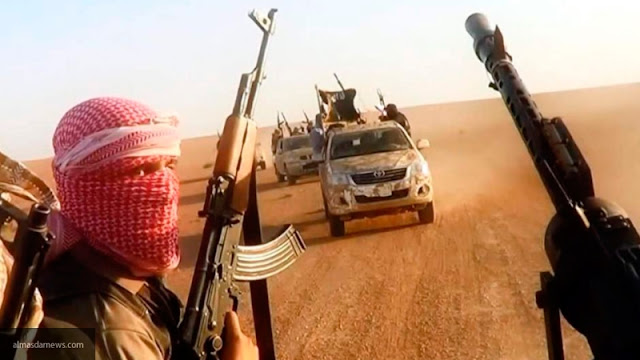 Syria, June 22. The convoy with reinforcements IG* destroyed on the way to Al-Sugnu in the Eastern partof HOMS. SAA shot down six U.S. drones on the border with Idlib and Latakia. The militants damaged a power plant in Dar, according to a military source Federal news Agency (FAN) in Syria Ahmad marzouk (Ahmad Marzouq).

Briefly about the results of the confrontation

Videoconferencing: in cooperation with Syrian air force air strikes in support of allied offensive of the CAA in the Eastern part of HOMS; the bombing of the fortifications of ISIS in Deir ez-Zor.

The Syrian Arab army (SAA) and the allied forcesare losses in military equipment in Dar; he shot down six American reconnaissance drones on the border between the provinces of Idlib and Latakia.

"Islamic state" (LIH*): the lost convoy with reinforcements on the way from the province of raqqa in Al-Sugnu; struck from ATRA on the strong points of the SAA in Deir ez-Zor; lost commander of one of the brigades in Western Mosul.

Free Syrian army** (PAS): has damaged the city's power plant of Naama in Dar.
"Tahrir Al-sham", killed several fighters of Hezbollah and seized weapons and ammunition from the Syrian-Lebanese border in the West of the province of Damascus.

The Kurds: recaptured radicals of the IG of the military base of the 17th division in Raqqa.

It became known that the attack of militants of the anti-government Association "Tahrir Al-sham" positions "Hezbollah" in the area West Calluna in the Western part of the province of Damascus, killed several fighters of the Lebanese organization and captured some weapons and ammunition to Pro-government troops, according to news portal Syrian Lense.

Syrian air force meanwhile struck several air strikes on fortified centers of the militants on the outskirts of the quarter of ain Tarma in the North-East of Damascus, reports Twitter feed (BtwlatAljyshAls). The command of the Syrian Arab army (SAA) requires the radicals of the armed opposition to take the areas of Jobar and ain Tarma voluntarily.

Hezbollah together with the units of National defence forces****** (NDF) are advancing on the fortifications of the radicals of the "Islamic state"* close to gas field al-hayl. According to a military source on Twitter (watanisy), combined troops managed to advance seven miles to the East of the pumping station "T-3". Information on losses of the parties has not yet been reported.
The Russian and Syrian warplanes, meanwhile, continued to carry out air strikes in support of the offensive. As a result of allied bombing had destroyed a convoy with reinforcements Islamic state terrorists heading from the province of raqqa in the key town of Al-Sukhna. It is reported by the Twitter feed (Syria_Hezb_Iran).

The province of Deir ez-Zor

A military source on the page in Twitter (SecDev) reports that the terrorists of the "Islamic state" launched a series of strikes from anti-tank missiles on the strong points of the Syrian Arab army (SAA) in Deir ez-Zor. Videoconferencing is conducting bombing the positions of the radicals of ISIS on the outskirts of the quarters of the administrative center of the province. The losses of the parties has not yet been reported.
We will remind, the territory of Deir ez-Zor is divided almost in half strength of government forces and ISIL militants. The confrontation continues for more than three years.

The Islamists destroyed a tank of the Syrian army near a Palestinian refugee camp in Dar, according to a military source in the social network Twitter (Fox61A). In addition, the militants as a result of massive shelling damaged the city power plant Nuama. In some areas of the city there is no light, betrays local source on Twitter (ahmadalissa).
According to the Twitter-channel (shahid_daraa), the Syrian air force struck several air strikes on militant positions on the outskirts of the city districts of Dar, in order to stem the constant attacks from the Islamist armed opposition. Data on losses of radicals are formed.

Five militants of the anti-government formation of "Jaish al-Fatah" were killed and 11 were injured in the blast in the city of Idlib, reports the Syrian Observatory for human rights. Not yet established what caused the explosion, but it is possible that the organizers could make the warring factions of Islamists, and terrorists of the "Islamic state", many "sleeper cells" which is on the territory of the province.
Government forces shot down six American reconnaissance drones on the border between the provinces of Idlib and Lattakia, according to a military source on Twitter (WithinSyriaBlog).

News Agency "Islamic state" says that today the capital of the province killing and injuring more than 53 soldiers of the Syrian democratic army**** (SDF) after two "Shahid-mobile" attacked strongholds of the Kurdish units.
We will remind, at the moment, about 15 percent of the city of raqqa is under the control of the Kurds, in several districts there are violent clashes. The night before the SDF and the people's protection Units (YPG) recaptured again the radicals of ISIS part of a military base of the 17th division.

Official Twitter channel of the marine corps of the United States of America (USMC) reports that U.S. Marines provide fire support to the "democratic army" around the clock.

The Iraqi army killed one of the commanders of the terrorists of ISIS, who was the leader of one of the brigades of formation, along with another 15 radicals in the area of al-Safaa in Western Mosul. The Iraqi command said that the quarter now is completely under the control of government forces. Besides, as reports a news portal of Iraqi News, the Federal police dismantled about 43 ISIL militants and destroyed five car bombs radicals.
Military sources of the news Agency, Al Sumaria News also reported that Iraq's armed forces quickly moving in the Old city, as ISIL terrorists beat a hasty retreat. It is expected that several hundred militants are still in this part of Mosul, but the area is about 100 thousand civilians, which the terrorists of ISIS are used as human shields, making it difficult to attack government troops.
* The organization is banned in Russia

World news today, June 22. Today it became known that the Russian s-300 systems in Syria opened fire on an unknown object, presumably the drone of the U.S. air force EQ-4 "Global hawk".
First that the s-300 (and maybe s-400) fired a missile in the Mediterranean sea, reported the Internet users, who became witnesses of this

“My closest friend just told me that the Russian system intercepted an unidentified object over the Mediterranean sea, the rocket they were released from the military base in Tartus.”

Insider Pentagon sources said that it was a us drone EQ-4 "Global hawk", is the largest flying apartat the U.S. air force. It is known that on Board were a unique system that enables seamless communication and coordinate work of commanders and fighters.
The cost of this drone is presumably starts from 131 to 222 million dollars, a communication system is 22 million. So Russia has embarked on a path of expensive retaliation for the downed aircraft of the Syrian army.
The Pentagon on this occasion still keeps a profound silence.

Mystery of Russian S-300 in the Tartus-What did they hit you? Mystery covers the news that the Russian army launched last night from the base in the Tartus of the Syrian missile S-300 to the west, in the direction of the Mediterranean sea, which would represent a dangerous escalation in the syrian war.