Will Trump's fake news lead to war with Russia?

Trump's White House released a bizarre statement last night that it believed
Syrian president Assad was preparing "another" gas attack against his civilians. The White House warned that a US attack on Assad would ensue. The State Department, Pentagon, CENTCOM, etc., apparently have no idea what Trump's talking about. Is Trump's fake news about to get us into war with Russia? 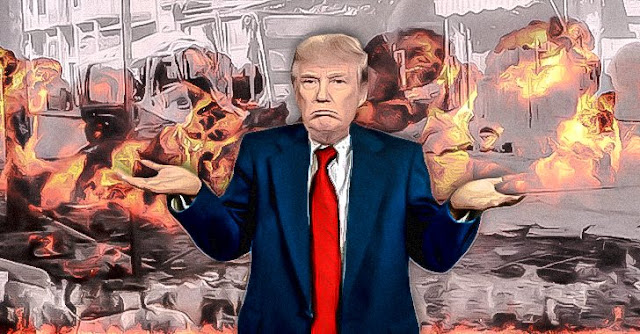 Barely a day ago, one of the top Google searches regarding Syria was Pulitzer Prize-winning journalist Seymour Hersh’s recent bombshell that the Trump administration did not have any intelligence linking Syrian President Bashar al-Assad to an alleged chemical weapons attack in Khan Sheikhoun in April of this year — but that he went ahead and bombed Assad’s airfield, anyway.


Now, if you Google search anything Syria-related, you will find an endless supply of fresh articlesabout the White House’s new warning that Assad has plans to launch a chemical weapons attack and that there will be a “heavy price” if Assad should decide to carry out these alleged plans.

One doesn’t need to accept Hersh’s source’s admission verbatim to cast doubt on the official story from April of this year; the Trump administration ordered air strikes on the Syrian government, supposedly in retaliation for an attack that occurred barely two days prior. At that time, it was virtually impossible to know what had taken place that day in Khan Sheikhoun because there had not been an impartial investigation. No investigation had taken place. Trump, with the full support of the mainstream media, was acting on sheer emotion with no regard to the facts on the ground – which are, let’s face it, all that matters.

The implication, however, is that because so many chemical weapons attacks have been pinned on Assad in the past, his culpability for the April attack was a foregone conclusion.
Yet there is little confirmed evidence of Assad’s responsibility for chemical weapons attacks, and the U.N.confirmed that Assad had removed or destroyed his entire stockpile after the events in 2013. Earlier that same year, U.N. investigator Carla Del Ponte said she believed the evidence pointed to chemical attacks carried out by the Syrian rebels (who were backed by the U.S.) — not the Syrian government.

We also know that ISIS and al-Qaeda’s affiliate in Syria have access to nerve agents and routinely use them.

This isn’t to whitewash Assad’s vast list of war crimes in the slightest. But the media’s job is to report facts, not speculation. The available evidence suggests Assad was not responsible for the major chemical weapons attacks in 2013 or the alleged attack earlier this year, and this sentiment has been echoed by MIT professor emeritus Theodore Postol, who previously worked as aformer scientific advisor to the U.S. military’s Chief of Naval Operations (you can access all of his reports on this topic here). Former weapons inspector Scott Ritter and former U.K. ambassador to Syria Peter Ford have also cast doubt on the West’s claims that Assad is indisputably behind the horrific attacks.

Yet the White House is pressing forward with this false narrative. They are taking the public for a ride. By hyping up this new non-existent story of an attack that hasn’t even taken place yet, they have pushed Seymour Hersh’s recent revelations completely out of the conversation. Coincidentally, the fresh batch of anti-Assad propaganda comes at the same time that Russia hasaccused the U.S. of “sparing” al-Qaeda in Syria, a glaring hole in America’s war on terror the U.S. refuses to discuss.

Further, Hersh’s reporting isn’t even mentioned in any of the recent articles claiming

Assad is about to launch yet another non-existent chemical weapons attack. Even if there is a chemical weapons attack in the days to come, the international community should immediately demand an official investigation before the U.S. spends another $93 million launching airstrikes against the Syrian government.

Not to mention, it has recently been revealed that the U.S. used depleted uranium in Syria – a country the U.S. has no legal justification to bomb in the first place — as well as white phosphorous (in both Iraq and Syria).

The hypocrisy is staggering. It is also unclear why the U.S. wants to rely on these false justifications to strike the Syrian government considering they have already been striking the Syrian army on multiple occasions in recent weeks.

So what could be the Trump administration’s real motives?

As the Independent notes, the White House’s intelligence is not conclusive.
Further, according toBuzzfeed:

“Five US defense officials reached by BuzzFeed News said they did not know where the potential chemical attack would come from, including one US Central Command official who had ‘no idea’ about its origin. The officials said they were unaware the White House was planning to release its statement; usually such statements are coordinated across the national security agencies and departments before they are released.”

Once again, the Trump administration is acting independently and on a whim of its own with regard to the Syrian conflict. But why — and for what purpose?

It is important to note that France’s recently elected president, Emmanuel Macron, gave Assad achemical weapons red line of his own at the end of May this year. Macron then backtracked on this, asserting that Assad can now stay in power because the French leader sees no legitimate successor to the current government.

In this context, the warning from the White House may not be an official warning to Assad, but rather, a statement to America’s closest allies. The U.S. cannot realistically go to war with Syria, Russia, and Iran if members of the anti-Assad alliance are reluctant to join. The U.S. has alreadylost Qatar (an avid backer of anti-Assad rebels in Syria) to Iran, a member of the pro-Assad axis.

As if on cue, Macron and Trump reportedly just discussed Syria in a phone call, and Macron’s office released a statement saying the U.S. and France will work together on a “common response” in the face of chemical weapons attacks, as reported by Reuters.

The U.S. military accounts for approximately 95 percent of airstrikes in Syria. Most likely, the Trump administration wants to ensure that the president has the backing of his closest NATO allies to further escalate the Syrian war in the face of Russian opposition. By keeping the conversation on chemical weapons, the U.S. can also isolate Russia on the world stage and allege that Russia is responsible for these gruesome attacks by being Syria’s staunchest backer. In fact, U.S. Ambassador to the U.N. Nikki Haley has already taken to Twitter to lay the blame on Russia and Iran for an attack that hasn’t even happened yet.

Ultimately, it is a sign of desperation as Syria and its allies continue to make strong gains inside the country in the face of the U.S. military presence. However, the more desperate the Trump administration becomes, the more dangerous the Syrian battlefield grows with each passing day.

Posted by seemorerocks at 10:36