The First Shots of America's New War for Eastern Syria Have Already Been Fired
If Trump admin officials have their way, the next US war will be to block the Syrian army from retaking Syria's Euphrates valley 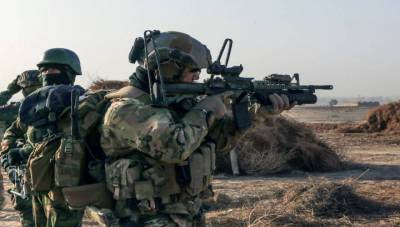 When the US shot down the Syrian Su-22 jet Sunday this may have been intended as a warning to Syria that the US intends to take eastern Syria for itself -- and that a Syrian push into eastern Syria will be violently opposed.

As late as April the Americans still assumed eastern Syria -- the city of Raqqa and the entire Euphrates valley down to Iraq -- was theirs for the taking. The Syrian army they assumed was too far away, too weak, and too busy, to try to liberate these areas from ISIS itself. A high-ranking US officer confidently told CNN:

"Right now, we are not planning, or coordinating, with them [the Russians and regime]. They are not even located near Raqqa. We think they have their hands full doing their tasks in their areas and they are probably happy to let the SDF and coalition forces tackle Raqqa."

Instead, the Russian-brokered cease fire deal with rebels in the west, allowed Syrians to move their best units eastwards, and start clawing away territory from ISIS. With Russian help the Syrian army took back 5,000 square kilometers to the east of Palmyra, and was making mayor gains in the northern Aleppo province as well.

The northern offensive stalled for a while in March-April when Syria's elite Tiger Forces were recalled temporarily to deal with a surprise Tahrir al-Sham (al-Qaeda) offensive in Hama. However, once they were back the Tigers covered nearly 100 kilometers in just 40 days bringing them in contact with SDF forces east of Raqqa.

Americans who had never seriously entertained the thought they would face real competition, now awoke to the fact the Syrian army had just established a credible springboard for a Tiger-led push into the Euphrates valley from the north. Days later they blew a Syrian Su-22 out of the sky over that very area.
The US military said the Syrian warplane was shot down in "collective self-defense". However, it said the same thing when it bombed Syrian and allied forces three times in a row in southern Syria, yet now The Washington Post has learned senior White House officials actually saw those strikes as a message to Syrians not to impede US ambition in eastern Syria:

To some extent, that clash has already begun. Unprecedented recent U.S. strikes against regime and Iranian-backed militia forces have been intended as warnings to Syrian President Bashar al-Assad and Tehran that they will not be allowed to confront or impede the Americans and their local proxy forces.

The Washington Post reports Trump administration officials want to cordon off Syrian approaches to the Euphrates valley, to ensure the entire area will be captured by US-backed forces. They are willing (even eager) to engage in "direct conflict" with Syria to do it:

Trump administration officials, anticipating the defeat of the Islamic State in its de facto Syrian capital of Raqqa, are planning for what they see as the next stage of the war, a complex fight that will bring them into direct conflict with Syrian government and Iranian forces contesting control of a vast desert stretch in the eastern part of the country.

As regime and militia forces have begun advancing eastward, senior White House officials have been pushing the Pentagon to establish outposts in the desert region. The goal would be to prevent a Syrian or Iranian military presence...

After offering the bizarre rationale that Syrian army advances versus ISIS must be blocked in the interest of the war against ISIS, the official WaPo spoke with lays bare the actual motivation of Trump officials:

Officials said Syrian government claims on the area would also undermine progress toward a political settlement in the long-separate rebel war against Assad, intended to stabilize the country by limiting his control and eventually driving him from power.

Denying eastern Syria to Syria's Assad government is a goal in itself. The Syrian government must be kept weak and eventually toppled.

Understandably "some in the Pentagon" are not keen on the idea that would demand of isolated US bases sprinkled across the desert to keep at bay the full might of the Russian-backed Syrian army:

Some in the Pentagon have resisted the move, amid concern about distractions from the campaign against the Islamic State and whether U.S. troops put in isolated positions in Syria, or those in proximity to Iranian-backed militias in Iraq,could be protected.

The naive optimism of proponents of this new war is astounding. Not only do they believe that the US can cordon off the Syrian army from eastern Syria, but that it can do so with very few soldiers on the ground -- as long as it is willing to rain bombs from the air early, aggressively, and often:

The official said the expanded U.S. role would not require more troops, comparing it to “The Rat Patrol,” the 1960s television series about small, allied desert forces deployed against the Germans in northern Africa during World War II.

“With our ability with air power . . . you’re not talking about a lot of requirements to do that,” the official said. “. . . You don’t need a lot of forces to go out and actually have a presence.”

Actually, that senior Trump officials are pushing for an expanded war in southern Syria was already revealed last week by Foreign Policy. What this new Washington Post report reveals is that the goals of this war would be much broader than was the initial intention. The goal would not be to "merely" deny Damascus stretches of the Syria-Iraq border, but instead the entire Euphrates valley from Raqqa all the way to Iraq.

It's good news that "some in the Pentagon" are resisting the proposal but what will really make the difference is if the Kurdish-dominated SDF declines to take part. The ramblings of White House amateurs aside, the reality is that without the Kurds the Americans do not have the numbers to block the Syrian army from the Euphrates.
Another reality is that opening a new risky war against the Syrian government and its international backers is not in the interest of Syrian Kurds, who do not lack for adversaries as it is.
It is one thing to have a race for the Euphrates valley where Damascus and the SDF race to take as much of eastern Syria from ISIS to enhance their respective post-war positions, which was always on the cards. It is another thing entirely to have a war for the river in which Syrian army advances are actively impeded and targeted as Trump administration officials are proposing now.
Hopefully the (post-Marxist) Kurdish leadership declines to take part in harebrained schemes of White House neocons and the war for Euphrates, which has already claimed the lives of a dozen or so Syrian servicemen in three separate US strikes, is laid to rest before it starts in earnest.