Greece: Pay for the privilege of working!

It's Official - Greece Unveils The Negative Salary, And A Whole New Meaning For "Pay To Play" 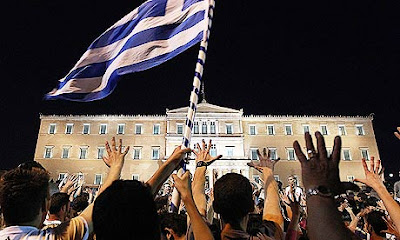 Zero Hedge,
22 February, 2012
We thought we had seen it all. It turns out we hadn't. The country that gave the world the alphabet, philosophy, and plates with funny sexually ambiguous drawings on them, has outdone itself again.
Because beginning this month some Greeks will have to pay for the privilege of having a job.
From the Press Project:
Salary cutbacks (called "unified payroll") for contract workers at the public sector set to be finalized today. Cuts to be valid retroactively since november 2011. Expected result: Up to 64.000 people will work without salary this month, or even be asked to return money.
Amongst them 21.000 teachers, 13.000 municipal employees and 30.000 civil servants.
Needless to say the BLS is salivating at the prospect of US workers paying for a job, as this will immediately allow them to double count said person's role in the employed part of the labor force (which incidentally has shrunk by 1% in the time it took to write this), as the money said "worker" pays can be used in the BLS hedonic models to theoretically hire many more people courtesy of fractional reserve lending.
Now if only everyone would agree to pay for the joy of playing Solitaire 9 to 5, then all the world's problems would be solved.
Posted by seemorerocks at 11:40