The Philippines have asked U.S. forces to leave their islands indefinitely.

The Philippines Want The

Authored by Tim Kirby via The Strategic Culture Foundation,
The pawns of the Grand Chessboard are starting to move much more boldly – in an unpredicted by the punditry decision the Philippines have asked U.S. forces to leave their islands indefinitely. It was impossible to think even 10 or 15 years ago that a country as completely militarily helpless as the Philippines would dare to stand up to Uncle Sam, but now this has become a reality. In a microcosm this move could be blamed on Duterte’s fiery personal character, or as some sort of fluke, but this is a growing trend that will probably continue for at least the next few years, in which ideology actually plays a major unseen role. 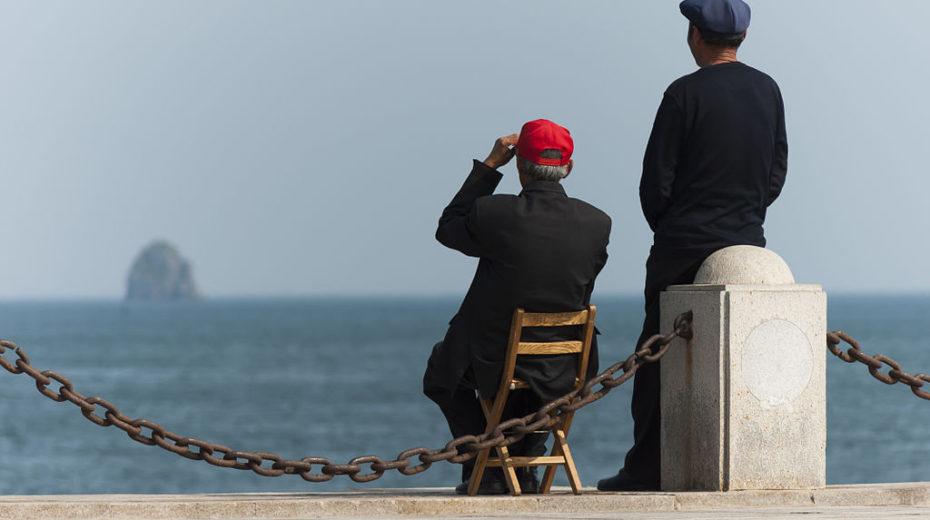 The Philippines are a poor troubled island nation that is starting to get its house in order thanks mostly to a powerful charismatic central figure, but if we look at the country through the lens of “Geopolitics 101” then we can see that this nation has more value than one would think due to its location. 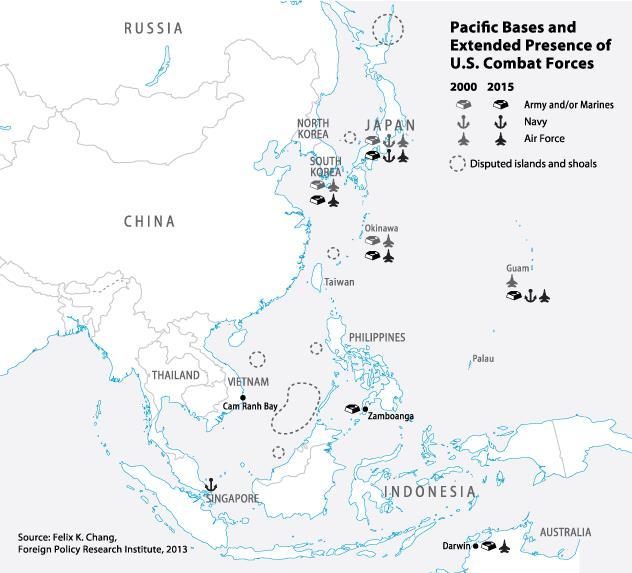 Souce: Foreign Policy Research Institute
If we can believe the maps of U.S. base locations presented to us via various forms of media then we can see that even without Manila’s blessing the U.S. still dominates the Pacific Ocean as a whole. Total control of the Atlantic and the Pacific thanks to the Allied victory in WWII has been very good for America to say the least and they need to continue to maintain it. The thing that makes losing the Philippines bad for the U.S. is that it could seriously erode the U.S.’s ability to create a naval blockade around China.
Although not stated explicitly one of the key reasons for China’s Belt and Road Initiative is the fact that at any moment Washington could completely cut off China’s sea trade. One of the reasons why Chinese goods have come to dominate the global market is due to the rise of cheap shipping costs. Loading a massive boat with cheap goods allows China to make things on the other half of the world for far less, than American workers can in their own country. But without waterways (cheap shipping), the Chinese advantage would be smashed and China as we know it today could be shattered.
The Philippines are located in the region of a potential Naval blockade, meaning that without them suffocating the Chinese from a naval standpoint becomes much more difficult and perhaps impossible. Not surprisingly, Duterte has been accused of making a pivot to China so perhaps his motivations for getting rid of the U.S. are not entirely morality based, but then again as a weak country the only way for the Philippines to matter is by playing great powers against themselves (or perhaps Chinese bribe money is sweeter). It is very possible that for this group of islands to have any sovereignty it needs bigger players to be fighting over
It may be too early to say because of Duterte’s bold move “the dominos are falling” but this is not the only nation that is trying to or has successfully removed U.S./NATO forces. The Kyrgyz ended foreign operations in their country most of which used their largest airport in Bishkek. (On a personal note it was very odd and humiliating to see an international airport with more foreign military planes in Bishkek than civilian, there were also many accusations of bad behavior towards locals including one alleged murder). Surprisingly even the Iraqi government which was essentially built by the U.S. has asked their forces to leave the country after the assassination of Iranian General Soleimani. Even the Mainstream Media admits that tens of thousands of Japanese have protested against U.S. bases in other country (again due to alleged abuse of locals). However, the government of Japan has made no formal requests to have U.S. forces leave, but quietly the constitutional ban on having a real military is being worn away by Tokyo as it has seen its first round of military expansion in decades.
In order for the U.S. to maintain its global military presence it needs to take a look at cases in which occupation has been seen as a positive by locals – South Korea. No matter what one’s personal feelings are about the North and South, the simple fact of the matter is that the Korean Peninsula is an all or nothing game. If the U.S. were to give up on Seoul then the North (with Chinese support) would come down and “unify” the nation. Many South Koreans are happy with the status quo and without the USA being around their lives are going to change quickly violently (and from their perspective) for the worse. This American necessity is not felt in Iraq, the Philippines or Kyrgyzstan, but if Washington wants to remain in these places they need to create it. The Cold War is over and America’s classic strategy of “side with Capitalism and you’ll get jeans and cars” is longer an option as the Chinese and to a lesser extent the Russians can also offer up plenty of Materialism.
A key factor in the Cold War division of the world was ideology. This allowed the U.S. and USSR to put foreign bases all over the planet. The collapse of America’s ideological strength will continue to allow uppity nations to one-by-one say good-bye forever. “The Russian are bad” or “we’ll give you Materialism” are no longer enough to justify foreign occupation. Washington needs to come up with a new ideological strategy and the Russians and Chinese need to be ready for this and at the same time continue to chip away at the failing Monopolar World. When locals see people they perceive as foreigners dominated their country, walking around with guns and occasionally abusing locals there needs to be some sort of grand justification for this.
In the Philippines there is not such justification. There is no reason from Manila’s or the man-on-the-street’s perspective that American troops should be in their country. The ideological erosion of American values after the U.S. victory in the Cold War must be stopped if the U.S. wants to remain the only global hyperpower.

Email ThisBlogThis!Share to TwitterShare to FacebookShare to Pinterest
Labels: Philippines