Skip the first 30 minutes for an excellent discussion on coronavirus


Today on TruNews we discuss how a dark alliance between the tech giants, big government, and the World Health Organization has plans to use the global coronavirus epidemic to enforce thought control over voices of truth who refuse to ignore uncomfortable stories about the origins and developments of this, and other plagues, threatening humanity. Rick Wiles, Edward Szall, Doc Burkhart. Airdate: 02/17/20. 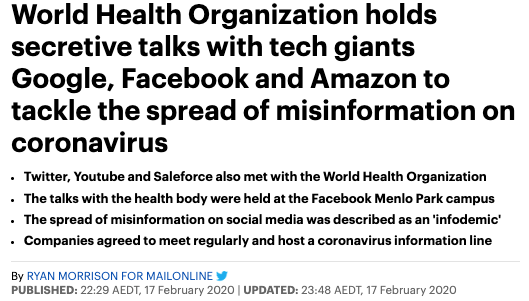 Google, Facebook, Amazon and other tech giants spent a day in secretive talks with the World Health Organization to tackle the spread of coronavirus misinformation.

The World Health Organization (WHO) has offered to work directly with the companies on fact checking in a bid to speed up the process.

Posts on the virus that needed to be removed have ranged from those calling it a fad disease or created by the government to claims it can be treated with oregano oil.

Companies at the meeting agreed to work with WHO on collaborative tools, better content and a call centre for people to call for advice, CNBC reported.

The 'shocking' rise in misinformation about the 2019-nCov virus has been described as an 'infodemic' by Andy Pattison from the World Health Organization.

He said sites were 'awash' with misinformation and conspiracy theories but that big tech companies were stepping up to combat the problem.

The meeting was organised by WHO but was hosted by Facebook at its Menlo Park campus in California, a spokesperson for the social media company told CNBC.

According to a CNBC report Amazon, Twilio, Dropbox, Google, Verizon, Salesforce, Twitter, YouTube, Airbnb, Kinsa and Mapbox were all at the meeting.

Apple, Lyft and Uber were invited but didn't attend, according to the report.

WHO shared information with the companies about its response to the virus and attendees gave their own ideas to address the outbreak.

As well as fake news stories appearing on Google and Facebook, books and products claiming to cure the disease were showing on Amazon.

Other outlandish hoaxes doing the rounds on social media include the implication the US government has patented coronavirus.

Fact-checkers have found this to be completely untrue and the Silicon Valley tech firms are battling to stop such claims from spreading to avoid mass hysteria.

A total of 18 nations including the US, Australia, Canada and France, have confirmed cases of coronavirus.

The disease is now confirmed to have infected at least 4,500 people around the world and to have killed 106 in China since the outbreak a month ago.

Cyber security experts warn that some malicious links posing as innocent articles or videos about the outbreak of the killer Wuhan virus actually contains code designed to pilfer personal information.

Hackers are spreading articles, posts and videos masked as legitimate file formats, such as PDFs or MP4s, to hide their true nature.

If clicked on and downloaded onto a phone or computer, hackers can gain access to the user's stored information and can destroy, block or copy data at will.

The coronavirus, which is being widely discussed as a major news story, has already been used as bait by cybercriminals,' said Anton Ivanov, Kaspersky malware analyst.

'So far, we have seen only 10 unique files, but as this sort of activity often happens with popular media topics then we expect that this tendency may grow.

'As people continue to be worried for their health, we may see more and more malware hidden inside fake documents about the coronavirus being spread.'

In order to avoid falling foul of the links, cybersecurity experts advise going directly to an official source.

According to Pattison some of the companies are further along in tackling the spread of misinformation about the virus than others, but didn't say which.

'The purpose of that was to plant seeds of ideas, and it worked well,' Pattison told CNBC. 'I encouraged collaboration and innovation. During a crisis, it's a good time for that.'

Twitter has added a prompt to search results about coronavirus to direct users to official Government information.

The social media platform said the tool was part of efforts to ensure correct information reached those searching from it and prevent misinformation spreading.

Facebook has a similar prompt when searching for the disease, as well as showing a link to the World Health Organization page prominently in the results.

When searching Google for the virus you get news stories, tweets, help guides from WHO and safety tips before the results.

Amazon and Facebook offered to share ad space or provide volunteers to help stop the spread of misinformation and the companies all agreed to meet every few months until the virus was under control.

The virus has had an impact on the tech industry with companies having to delay production of new products and the Mobile World Congress in Barcelona - the world's largest mobile conference - was cancelled outright.

Apple has closed shops in mainland China and a number of airlines have cancelled flights to the country.

Refusing To Hand Over

Update (1010ET): It turns out the Wuhan P4 lab that ZeroHedge questioned as the source of the virus released an internal statement on January 2nd - two weeks before the first officially-reported case - forbidding all staff from mentioning the coronavirus... 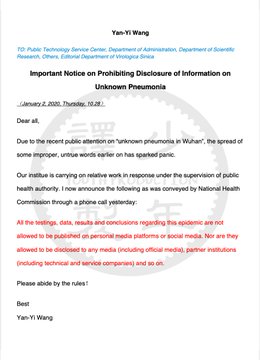 365 people are talking about this
*  *  *
Authored by Paul Joseph Watson via Summit News,
Senator Tom Cotton says that China is refusing to hand over evidence concerning the bio-safety level 4 research lab in Wuhan despite a new report from biological scientists at the South China University of Technology saying it may have been the source of the coronavirus outbreak. 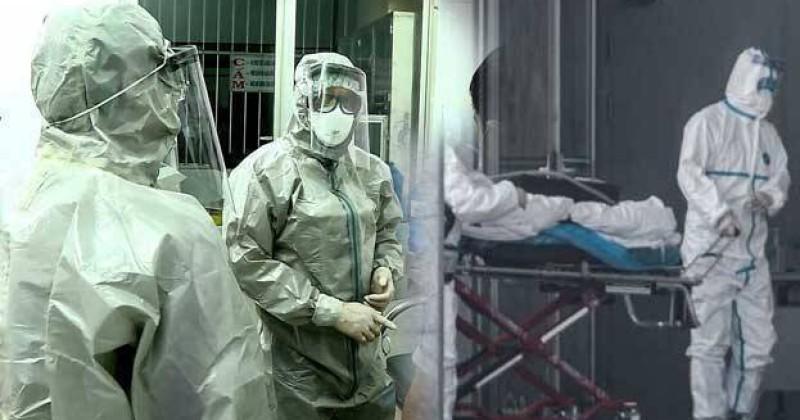 During an appearance on Fox News, Cotton told Maria Bartiromo that new evidence confirmed the source of the virus was not the meat market in Wuhan.

“Here is what we do know. This virus did not originate in the Wuhan animal market,” said Cotton.
“Epidemiologists who are widely respected from China published a study in the international journal Lancet have demonstrated that several of the original cases did NOT have any contact with that food market. The virus went into that food market before it came out of that food market. So we don’t know where it originated... We also know that only a few miles away from that market is China’s only bio-safety Level Four Super Laboratory that researches human infectious diseases.”

Cotton said that China’s “duplicity and dishonesty” meant that questions needed to be asked about the lab but that “China right now is not giving any evidence on that question at all” and Beijing was being “very secretive” on what happens at the lab.
Cotton also accused China of consistently blocking American scientists from traveling to Wuhan to assist in discovering the origins of the virus.
A new report by scientists at the South China University of Technology in Guangzhou, China concludes that “the killer coronavirus probably originated from a laboratory in Wuhan.”
One of the laboratories named in the report which was conducting research on bat coronavirus was located just 280 meters from the site of the Wuhan meat market.
For weeks, the media has demonized anyone who suggested the lab could have been responsible for the coronavirus outbreak as a dangerous conspiracy theorist peddling fake news. 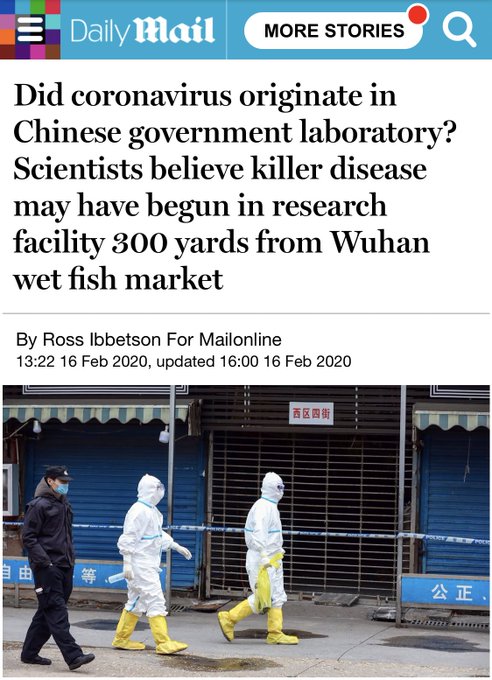 10.1K
8:25 AM - Feb 17, 2020
However, now that CNN/NY Times journalist Ezra Cheung tweeted precisely that yesterday, one wonders whether they will begin to change their tune.
*  *  *
My voice is being silenced by free speech-hating Silicon Valley behemoths who want me disappeared forever. It is CRUCIAL that you support me. Please sign up for the free newsletter here. Donate to me on SubscribeStar here. Support my sponsor – Emergency Survival Foods – delicious dishes & a 25 year shelf life!
Posted by seemorerocks at 14:55