The Guardian: "Coronavirus 'could trigger damage on scale of 2008 financial crisis' "

In the early days, when virtually nobody paid attention to the coronavirus pandemic which China was doing everything in its power to cover up, markets were not only predictably ignoring the potential global plague - after all central banks can always print more money, or is that antibodies - but until last week, were hitting all time highs. All that changed when it became apparent that for all its data manipulation, China was simply unable to reboot its economy as hundreds of millions of workers refused to believe the government had the viral plague under control, starting a potentially catastrophic 2,3 month countdown to millions of small and medium Chinese businesses going bankrupt, resulting not only in untold devastation in the world's 2nd largest economy but paralyzing and crippling supply chains across the world. Worse, it also triggered the biggest equity selloff in years.
And now, the coronavirus pandemic is about to leave yet another market in critical condition as the global credit machine is grinding to a halt.
As Bloomberg points out, the $2.6 trillion international bond market, where the world’s biggest companies raise money to fund everything from acquisitions to factory upgrades, came to a virtual standstill as the coronavirus spreads panic across company boardrooms.
While hardly a surprise with US equity markets suffering one of their worst selloffs since the great depression, Wall Street banks recorded their third straight day without any high-grade bond offerings, an unheard of event - especially in this day and age of ravenous yield apetite - outside of holiday and seasonal slowdowns. Across the Atlantic, European debt bankers had their first day of 2020 without a deal on Wednesday. And bond issuance in Asia, where the virus first emerged, has also slowed to a trickle.
As Bloomberg puts it, "it has been a remarkable turn of events for a market where investors had been snapping up almost anything on offer amid a global dash for yield. Europe had been enjoying its strongest ever start to a year for issuance, and sales of U.S. junk bonds have been on the busiest pace in at least a decade. With so many borrowers having postponed their issuance plans, a calming in global markets could kickstart debt sales again."
Honeywell, Virgin Money UK and Transport for London were among the numerous European borrowers who had lined up deals before financial markets turned upside down. Before the slowdown, Europe had seen 239 billion euros ($260 billion) of bonds sold in January alone. Across in the US, the investment-grade market was expecting around $25 billion of sales this week before virus fears froze the market on Monday. Excluding the seasonally dead December holiday season and typical two-week summer hiatus in late August, there hasn’t been that long of a break to start the week since July 2018.
As shown in the chart below, after record new issuance in the investment grade market, the last week of September has seen a total paralysis in the primary market, similar to the freeze of China's economy. 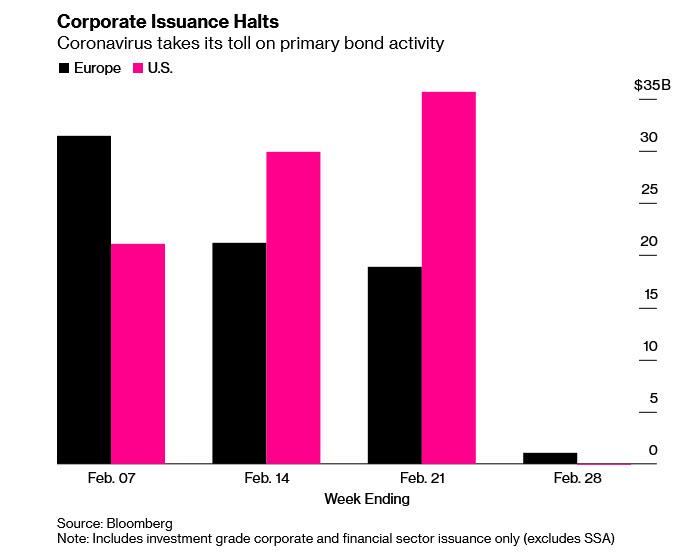 Amid a surge in uncertainty that has crushed dip buyers, and left even central bankers scrambling to figure out what the proper response is, credit investors have been rattled by the potential impact on company earnings - now that most realize collapsing supply chains could result in catastrophic number in coming quarters - from disruption caused by the virus, which has seen huge parts of global supply chains shutting down. Meanwhile, as traders await the the panic selling to kick in, a derivatives index that gauges credit market fear in the U.S. had its biggest jump in more than three years on Monday as investors rushed to hedge against a wider selloff.
"It’s a coin toss as to what tomorrow will look like, or even the rest of today," said Tony Rodriguez, head of fixed income strategy at Nuveen. "You have to respect the fact that when you don’t have an information advantage to not make any significant moves."
It's not just the IG market: offerings also came to a halt in the junk-bond market, where until the past week, $67 billion of sales had been running at the fastest pace since at least 2009, Bloomberg data showed. Mining giant Cleveland-Cliffs was the latest to try and crack the primary market freeze on Wednesday, with a $950 million offering of secured and unsecured notes testing the market in an attempt to refinance an acquisition target’s debt. And the Canadian market remained open for business as utility company Hydro One Ltd. raised C$1.1 billion ($827 million) in the largest Canadian dollar bond from a non-financial company this year.
Ironically, one can argue that there is a simple way to reboot the credit market: just offer higher yields:
Almost as if investors don't buy credit for the (relative) yield, but for the capital gains from selling it to a greater fool.
Meanwhile, the worsening pandemic is already taking a toll on companies’ balance sheets, with drinks maker Diageo set to book as much as a 325 million-pound ($422 million) hit to organic net sales. In the U.S., United Airlines Holdings withdrew its 2020 profit forecast Tuesday as it can’t guarantee its earlier earnings goal. Microsoft was the latest to cut its guidance for personal computer sales. And it's all downhill from here.
The biggest concern however: with bond markets frozen, just how will IG-rated companies obtain the funding they need to keep buying back their stock, and pushing the market higher. In fact, one can argue that the freeze of the credit market is far more dangerous to the stock market than the inability to refinance a 1% bond with something paying 0.5%. If that's the case, expect far more pain for stocks in coming weeks and months as the market's entire buyback spree of the past three years goes into a very painful and dramatic reverse. 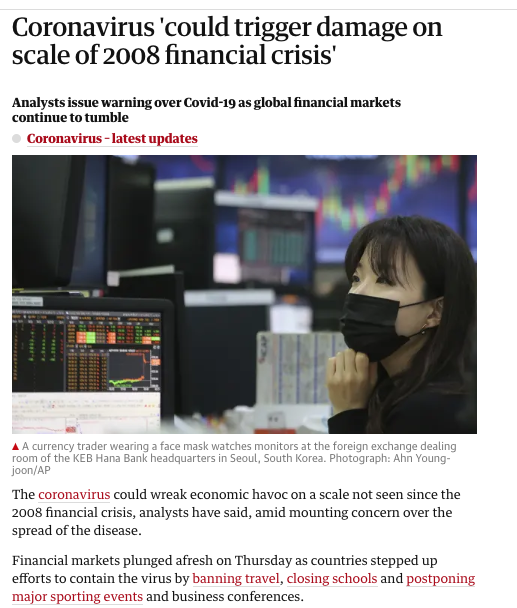 https://www.theguardian.com/business/2020/feb/27/coronavirus-could-trigger-damage-on-scale-of-2008-financial-crisis-covid-19
Posted by seemorerocks at 10:39