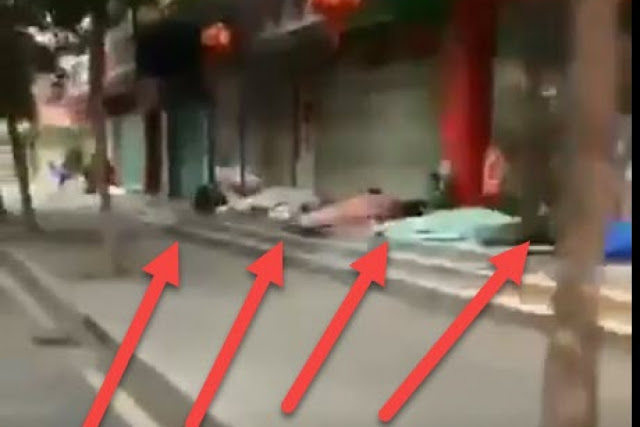 This is just a three block area in ONE China city.

Yet today, China had the unmitigated GALL to tell the world only 105 new deaths occurred in the entire country, from the virus, today. LIES!

That's what Communists do; they lie. ALL OF THEM.

Even Bernie Sanders and his fellow travelers here in the USA. Commie Liars. ALL OF THEM.

This outbreak is a real shame. So many dead. So many more dying. Economies heading into shambles.

Too bad there isn't (yet) some good coming of this.

Maybe folks who get this virus can go breathe or start coughing on George Soros and his various real estate holdings? While we're using this kind of dark hyperbole, maybe they can do it with the Rothschilds too?

Now THAT might be a good outcome from this outbreak! /sarcasm off

LITTLE TIME LEFT TO PREPARE IN USA and EUROPE

What you see above IS COMING HERE. To America. Probably to Europe too.

It is now UNAVOIDABLE.

Governments suppressed the truth about this virus so long, that literally THOUSANDS of infected people were able to board planes in China, and fly elsewhere. Many of them were INFECTED. Most didn't even know it.

They flew all over the world to get away from the outbreak, and the announced Quarantines.

When they got off those planes, at some point days later, they began shedding virus in their breathing, coughing, sneezing, urination and bowel movements.

Their hands conveyed the virus to surfaces of door handles, elevator buttons, cash money, cashier counters in stores and Lord only knows where else.

Now, other people are starting to get sick from being infected by these Chinese travelers.

China is now about 6 weeks into their outbreak. We here in America are almost to four weeks. What we see in China WE WILL SEE HERE. It cannot be avoided.

Posted by seemorerocks at 15:18