Coronavirus news from the USA

The CDC prepares for a

This is the same Nancy Merssonnier who told her friend in a personal text message that there were already a thousand cases. 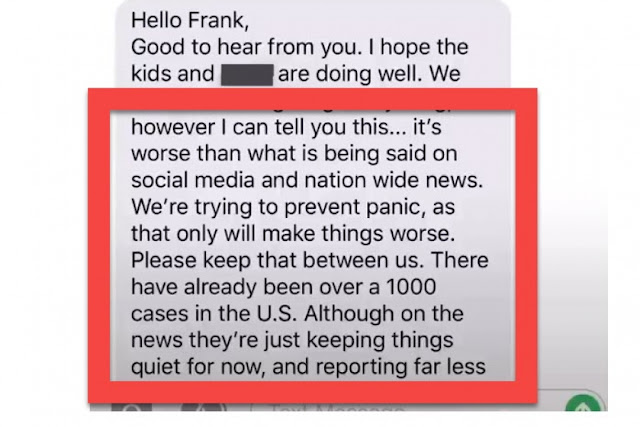 Hospitals across the US 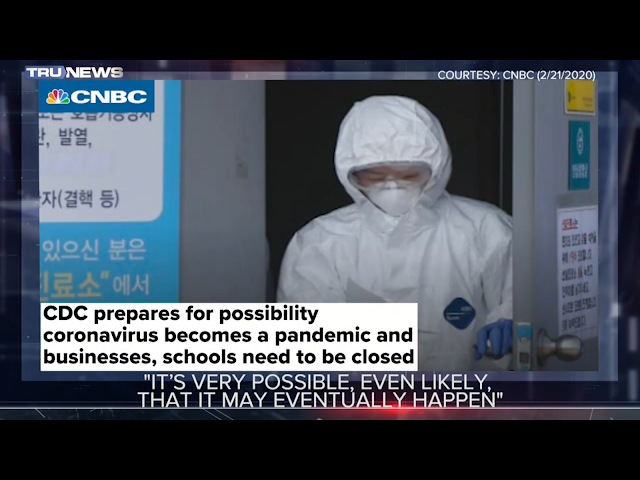 “This is the time to open up your pandemic plans and see that things are in order,” Dr. Anne Schuchat, a top official of the Centers for Disease Control and Prevention, urged hospitals last week as an outbreak of a deadly new coronavirus ravaged much of China.

“For instance,” she continued, health-care providers need to plan for a “surge at a hospital, the ability to provide personal protective equipment for your workforce, the administrative controls and so forth that you might put place in a health care setting.”

Schuchat’s warning came as U.S. and world health officials increasingly sound the alarm of a possible pandemic outbreak of the deadly new coronavirus that has killed more than 2,100 people in China in the last seven weeks.

The COVID-19 epidemic in China has not yet met world health officials’ designation of a global pandemic that spreads far and wide throughout the world. While it has spread to more than two dozen countries, international health officials say there’s very little transmission on local levels outside of China right now. But they’ve warned that could quickly change. The virus is proving to be far more contagious than the flu, having spread from 300 people in mid-January to more than 75,700 as of Thursday morning.

While a majority of those cases are in China — with just 15 confirmed in the U.S. — the CDC has been working with the health-care sector to prepare for the virus to “take a foothold in the U.S,” Dr. Nancy Messonnier, director of the CDC’s National Center for Immunization and Respiratory Diseases, told reporters Feb. 12.

“At some point, we are likely to see community spread in the U.S. or in other countries,” she warned.
U.S. hospitals from San Diego to New York are taking heed.
The threat of the new virus comes at an already busy time for most U.S. hospitals. Another serious respiratory illness, the seasonal flu, is at its peak in the United States, with more than 26 million cases and many hospitals stretched thin. A larger spread of the new virus across the U.S. could overwhelm emergency rooms and quickly cause supply shortages of some crucial medical supplies, according to half a dozen interviews with doctors, U.S. hospitals and health systems.

Hospital staff at San Diego-based Scripps Health are consolidating medical supplies such as masks, gloves and gowns and have ordered backup reserves in case of a widespread outbreak in the United State, said Dr. Ghazala Sharieff, chief medical officer.
Health-care workers are being taught how to reuse N95 respirator masks, most often used to control exposures to infections, in case of wide-spread shortages, she said.
Patients presenting flu-like symptoms are also being asked on a questionnaire about their recent travel history, including whether they’ve been to China in the last 14 days or have been in close contact with anyone who has, she said.

“We don’t know what happens next, but we are prepared,” Sharieff said. “We are fine with supplies right now but we don’t want to get caught without supplies.”
So far, 26 people have been screened for possible exposure to the coronavirus that emerged from Wuhan, China, over a month ago, Sharieff said. One of the patients actually met the qualifications for having the virus before further testing came back negative, she said. Early during the outbreak, patients were coming in concerned they may have been exposed to the virus,but that has since tapered off, she said.
“I think we’ve done a good job educating people,” she said. “When we first started, there were people in the community saying they were worried that they stood next to someone at the airport who had a mask on. ... I think they realized that that is probably a little bit of panic on their behalf.”

At Northside Hospital, a network of hospitals and medical facilities in Atlanta, the staff is continuously monitoring the coronavirus outbreak, according to a spokesperson.
The hospital said if a patient has any clinical symptoms and has recently traveled from Wuhan, or if they have been in close contact with a person who is under investigation for the virus, they will be masked and taken directly to an airborne isolation room, where they will remain while in the hospital.
“Infection control and prevention measures are always a priority,” spokeswoman Katherine Watson said.

Staff at NYU Langone Health in New York City has designated the new virus as a “level 1” priority.
“A big part of this level is communication,” said Dr. Jennifer Lighter, hospital epidemiologist there.
“We are trying to communicate to NYU staff and patients in our medical center how to best protect themselves from the flu or COVID-19,” Lighter said. “That’s just general info like basic hand hygiene, sneezing into the end of your elbow and practicing safe distance from someone who is sick.”
NYU is also preparing for a level 2 or 3 scenario, she added, where there is transmission in the city and it begins to impact hospital operations. The health-care system has implemented a conservation plan and medical supplies, especially respirator masks, are only given to staff as needed, she said.
“If a team needed more, they would have to be infection-prevention approved or manager approved before someone would get more,” she said, adding staff is already feeling the brunt of the flu season.
The hospital is also recommending patients with more mild symptoms to stay at home, she said. The hospital has been ramping up its virtual urgent care, including training doctors and purchasing more iPads and other machines. “If you’re shortness of breath, obviously, please come in,” Lighter said.

Dr. Robert Citronberg, director of infectious diseases with Advocate Health Care in Illinois, said the risk of the coronavirus becoming widespread in the U.S. remains “low,” citing the country’s strong health-care infrastructure.
But that doesn’t mean health-care workers are complacent, he said. Citronberg, who works out of Park Ridge, northwest of Chicago’s O’Hare International Airport, said there’s always the potential of someone getting off a plane with exposure to the virus.
“We certainly are not complacent about that possibility,” he said. “We are really trying to reinforce with our front-line staff particularly that you still got to be alert, you’ve still got to be on your toes.” Citronberg said,. He added that the health-care system doesn’t have any “imminent problems” with medical supplies such as masks and gloves because it already stocked up on them due to the flu season.
They are asking every patient whether they’ve recently traveled to China or had contact with anyone who has been there. Advocate has also increased its use of telemedicine over the last few years and that may be useful in handling a outbreak, he said. 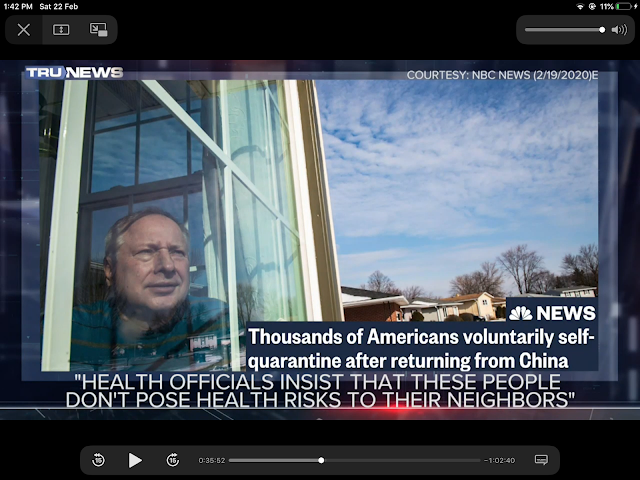 These are not people sick with COVID-19, the disease caused by the coronavirus. They have had no fever, no cough, and aren't necessarily being tested for the virus.

Instead, they simply traveled in China within the past few weeks, and have since been flagged by health officials at one of the 11 airports nationwide through which all U.S. citizens and their families flying from China are being routed. And now they're being asked to stay home for 14 days — the maximum amount of time it's thought to take to develop the illness after being exposed — limiting physical contact with others as much as possible, and watching for symptoms.

Health officials insist that these individuals do not pose a health risk to their neighbors. On the contrary, reports have suggested many travelers are going above and beyond to ensure they aren't a source of any spread.

Quarantine is for healthy people who may have been exposed to a contagious illness, and is used in an attempt to control potential outbreaks. It's different from being put in isolation, which refers to people who have symptoms or have been diagnosed with the illness.

Americans flown back to US

on plane full of healthy 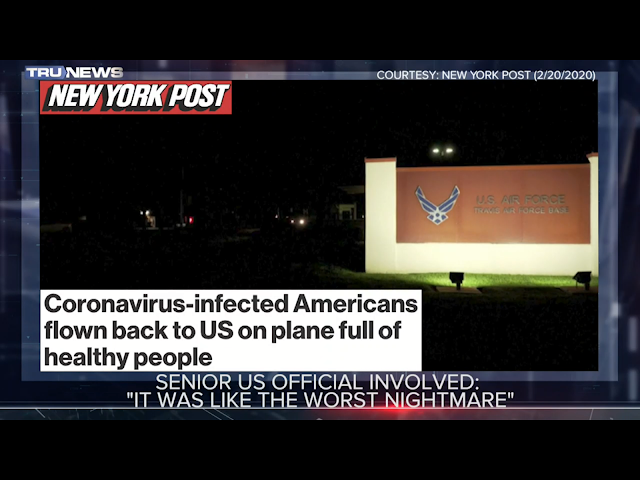 The 14 coronavirus-stricken Americans evacuated from a cruise ship in Japan were flown back to the US on a plane full of healthy people against advice from the CDC, a report said Thursday.


Centers for Disease Control and Prevention officials argued the 14 infected Diamond Princess passengers shouldn’t be flown back with the 300 or so virus-free people — but ultimately lost the battle to the US State Department, according to the Washington Post.


“It was like the worst nightmare,” an anonymous senior US official involved in the decision told the paper.


Test results had found that the 14 passengers were infected prior to boarding planes to the US on Monday.


“Nobody anticipated getting these results,” said another US official.


The State Department had vowed that no one with the infection would be allowed on — but then urged health officials to let the sick yet symptom-free passengers board, the paper reported.

The CDC worried about infection control aboard the planes. Principal deputy director Anne Schuchat wrote to the State Department that the stricken passengers would pose “an increased risk to the other passengers,” according to the report.


But officials with the Department of Health and Human Services and the coronavirus task force pushed back, arguing that they had been prepared to handle passengers who might develop symptoms on the flights.


The two Boeing 747s had 18 seats cordoned off with 10-foot-high plastic on all sides and infectious disease doctors would be on board.

William Walters, director of operational medicine for the State Department, said the 14 people were already in the evacuation pipeline and protocol dictated they should be brought home, according to the report.

The State Department revealed that the 14 evacuees had tested positive for the virus about an hour before the planes landed in California and Texas.


Other passengers were enraged that they hadn’t been told about the risk.


“We were upset that people were knowingly put on the plane who were positive,” said Vana Mendizabal, 69, a retired nurse who took the cruise with her husband, Mario.


“I think those people should not have been allowed on the plane,” she added. “We feel we were re-exposed. We were very upset about that.”