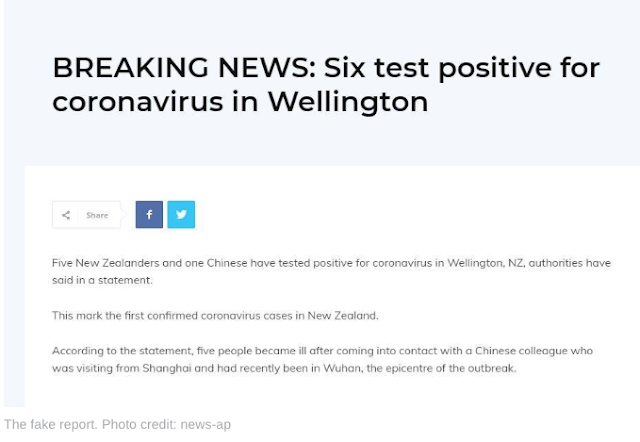 The attention-grabbing headline "Six test positive for coronavirus in Wellington", published on news-ap.com, was brought to Newshub's attention by several people who said they'd seen it circulating on Facebook.

According to the report, citing a statement from "authorities", five Kiwis and a Chinese resident had tested positive in the capital.

The claims have been quickly shut down by the Ministry of Health. A spokeswoman told Newshub they were made aware of the article on Sunday.

"Authorities have made no such statement and that 'message' is without foundation," she said. "There are currently no confirmed cases of COVID-19 in New Zealand."

She said the ministry is committed to providing advice and public information as soon as possible, should a case be confirmed in New Zealand.

Newshub has contacted news-ap.com for comment. The site's origin is unclear as no information is provided on its page, other than an email address.


Meanwhile, Prime Minister Jacinda Ardern says 11 Kiwis on a coronavirus-stricken cruise ship in Japan may be evacuated in a joint mission with Australia.

There have been almost 70,000 cases of coronavirus - which has officially been named COVID-19 - confirmed so far, the vast majority of which are in China.

The death toll currently stands at 1670, with all but five of those deaths occurring in China.

Unlike corporate media I give the chance for people to see the article in question.

Five New Zealanders and one Chinese have tested positive for coronavirus in Wellington, NZ, authorities have said in a statement.

This mark the first confirmed coronavirus cases in New Zealand.

According to the statement, five people became ill after coming into contact with a Chinese colleague who was visiting from Shanghai and had recently been in Wuhan, the epicentre of the outbreak.


Authorities say the Chinese is still not showing symptoms of the virus despite testing positive and that is why border control did not notice.

The six have been admitted at an undisclosed health facility and are staying in an isolation ward.

Countries around the world are starting to cut ties with China and pull their citizens out of the crisis-hit Hubei region, where the virus emerged in the city of Wuhan.

Hong Kong’s leader today held a press conference during which she wore a face mask and said the city would stop all high-speed trains and ferries to the mainland, halve the number of flights and stop giving visas to visitors from China.


Thirteen cases around the world have confirmed the coronavirus is spreading from person to person outside of China among people who have not visited the country.

In the context of a global cover-up of the full nature of this pandemic I do not believe official pronouncements.  I do not know what has happened here but I can make a few points.
My partner spoke to someone (Kiwi) at the market who has contact with the Chinese community who said that someone had been taken off a cruise liner unwell in Wellington just over a week ago.

And what, may I ask is this about? Do you believe the bland assertion that people being helped into an ambulance by people in hazmat suits has nothing to do with coronavirus?  Reallly?! 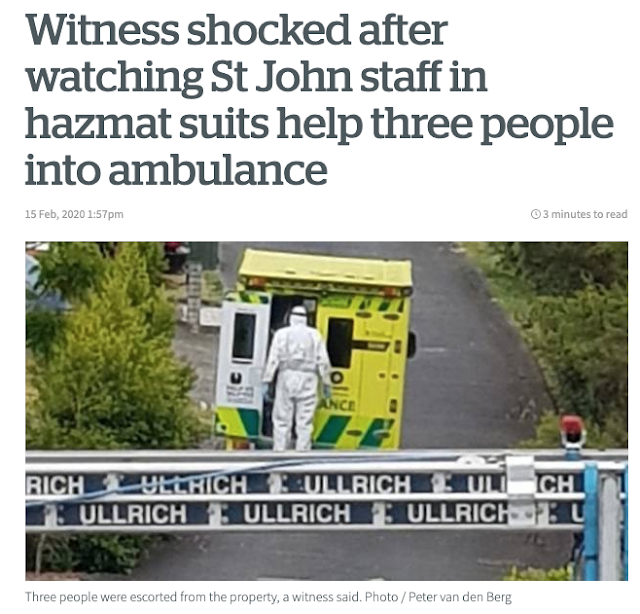