There is nothing I would like more than for this to be shown
to be "crazy conspiracy theory". The only way of ruling this
out is TIME and not ideas and opinions that exist in your
head.

Person claiming to have been

deployed for UN and NATO

missions claims there are 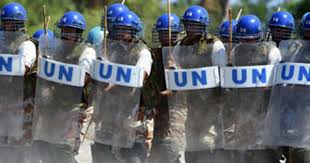 Hal Turner is saying to his subscribers that “NATO Troops are already being
called-up to be used for military Quarantine Operations inside the United
States”.

He also claims that:

“ Troops will be given wads of cash to offer to "buy" weapons in
possession of citizens. If they sell -- and reveal WHO ELSE
OWNS GUNS-- they will be paid more cash. Those who refuse,
WILL BE ATTACKED AND KILLED."

Under more “normal” times I would run away from such explosive claims but
all I can say is there is little that I can totally rule out.

I am sure Turner will have a lot more to say about this on his radio show but,

In the meantime I found the statements he was referring to in his article for his
subscribers:

More on this tomorrow after I have heard Hal Turner speak about this.

I would like to believe this is really crazy, extreme conspiracy theory but I
cannot rule anything out right now.
Posted by seemorerocks at 13:07