Are the authorities monumentally stupid or do they actually WANT US to be at risk?

It is a case of "risk management", which entails balancing the needs of the population with the"needs" of the economy - and that, in turn, means kowtowing to China.


People struggle to find places to self-quarantine amid coronavirus outbreak 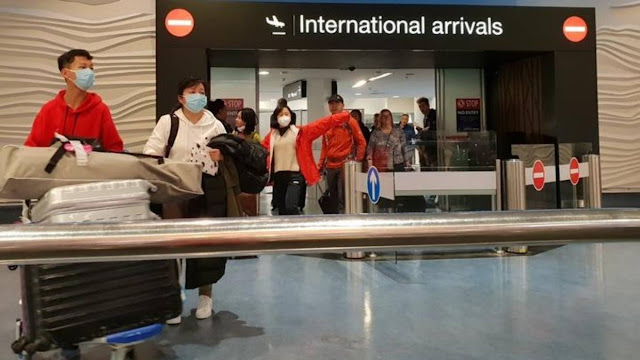 People returning from mainland China are calling for more guidance and help from the government as they struggle to find places to self-isolate.
The Covid-19 outbreak has now claimed 1775 lives, and the confirmed cases have surged to 71,335 worldwide, with a majority of them in mainland China.

The government has asked those who have travelled from and through mainland China since 2 February to stay in quarantine for two weeks, but some people say they have nowhere to go.

Director of Public Health Dr Caroline McElnay said up to midnight Sunday, there have been 4386 people who have registered as being in self-isolation.


Auckland woman Connie, who didn't want her surname used, was busy looking for a place to stay for her adult nephew, who's returning from Guangdong in south China on Friday.

For the past 10 years, he's been living with Connie and her family of four. However, things are a bit tricky this time.

"We don't have a place for him to stay in quarantine. The whole family lives in the same house. There isn't any additional space. We will have to live in the same space, using the same toilet and bathroom all the time. How can we stay away from each other?"

"If the government or the Healthline can give them a place - make somewhere available for them to spend these 14 days quietly, that would be good. Then it wouldn't cause any trouble to others and they have somewhere to stay. We can take care of sending food."

Connie said she was told government emergency housing could be arranged for her nephew only after he was finished quarantine.

Jianwu Zhang slept in his car for two nights after coming back to Auckland from Shanghai last week.

He chose to stay away from his flatmates, and spent two hours in the airport calling around for alternative accommodation.

"I was wanting to book a hotel. A friend was helping to make calls as well. I was also making my own calls, but we called four or five motels in Auckland, they all said I can't stay there."

He finally found an estate in north Auckland with short-term accommodation. Zhang said there were things the government can improve on.

Auckland woman Julia Miao was among a group of volunteers who have been helping people like Zhang to look for a place to stay.

She said they were searching accommodation websites, putting the message out on social media - as well as contacting schools and government agencies. But it had been hard work.

"Most of them [accommodation providers] have said 'no', and very few said 'let me think about it'. Generally they will take a few days to think. I've tried very hard to follow up. But our people can't wait. We also got lots of calls from overseas asking for help - these people can't wait a few more days," Miao said.

Tauranga man Andy Liu, who was part of the group, said they had received 150 calls for help since late last month and calls kept coming in.

The group has helped some people already, but there weren't enough volunteers to answer all the pleas for help and it could be difficult to find suitable accommodation.

"I don't know what the government's plans are, but we hope every department can co-operate with each other to overcome the difficulties ... the government is the main power in this," he said.

The Ministry of Social Development's group manager of client service delivery, Kay Read, said the ministry had made "a small number" of hardship grant payments related to the virus and that number was expected to increase.

"We encourage people to get in touch with us to discuss their individual situation and what help is available. We will be offering all available support to assist people through this period of uncertainty," she said.

The Ministry of Health said anyone who needed assistance should contact Healthline's dedicated COVID-19 phone number 0800 358 5453, and some financial assistance was available to individuals and families.

"Healthline are working to understand people's individual welfare needs, and will be regularly checking on the welfare and wellbeing of those persons registered," it said in a statement.

"The ministry is continuing to work with other agencies to explore how we can further support people who are self-isolating. For example, there is already a range of support available to New Zealanders who are faced with financial hardship."

According to New Zealand Customs Service, 7459 people have arrived from mainland China since 3 February.

Are the authorities monumentally stupid or criminal psychopaths? 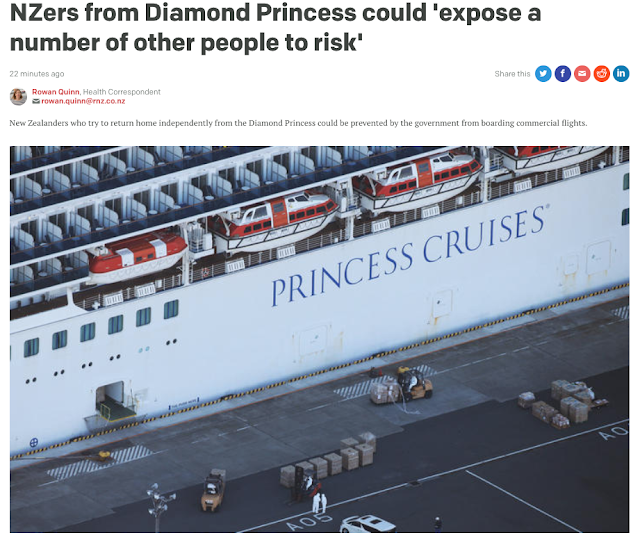 Eleven New Zealanders are among thousands of passengers due to leave the cruise ship tomorrow after spending two weeks confined to their cabins because of a corona virus outbreak.

The Australian government has offered to take New Zealanders to Darwin on a flight out for its citizens but they must agree to undergo two weeks quarantine when they get home.

New Zealander Wren Manuel had initially said he and his wife would not take the Australian flight because they did not want to be quarantined again.

But since learning they would have to be quarantined no matter where they were, they decided to take the flight to Darwin.

He was frustrated that the government had not evacuated New Zealanders earlier and lessened the time they would have to be isolated.

Prime Minister Jacinda Ardern said anyone who did not come home on the Australian flight would need to undergo quarantine in Japan.

"We need to keep in mind that if they try and fly commercially then that exposes a number of other people to risk," she said.

Some of the passengers were distressed about having to be quarantined again, she said.

"I understanding how frustrating that will be for many of them... but unfortunately there has been such a rate of transmission, despite some incredible efforts from all those involved, that we do need to put public health and their health first first," she said.

The government was considering chartering a commercial flight from Darwin to New Zealand, she said.

Health minister David Clark said it was most likely the returning passengers would go to the centre at Whanagaparaoa where 157 people who travelled from Wuhan were due to finish their quarantine tomorrow.


This is while China has locked down half of its population and is not allowing people to leave their homes. 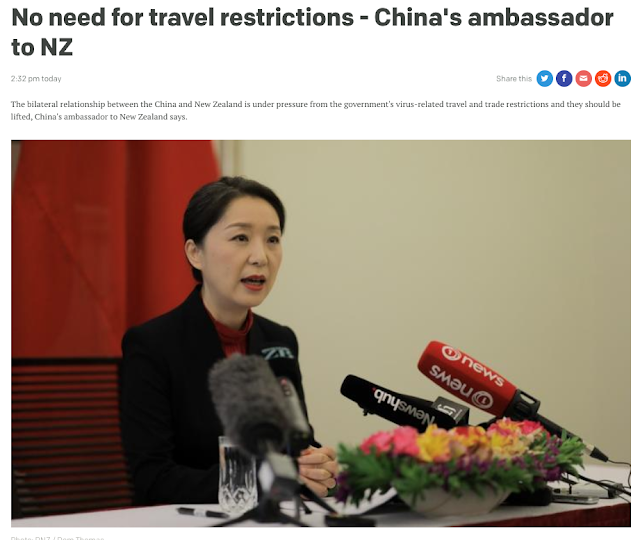 At a media conference at the Chinese Embassy in Wellington this morning, Wu Xi noted the World Health Organisation has said there is no need for such restrictions.

Trade has stalled and Chinese students are unable to start university here and it's time New Zealand reconsidered its position, she said.


"Recommendations from the WHO are clear cut and it has been reiterated time and again."


Wu added that cases of coronavirus are declining, which shows the Chinese government has the virus under control.


She also praised the "outstanding leadership" shown by President Xi Jinping in the wake of the crisis and played a number of video-clips from Chinese media positively describing the prevention and control efforts underway.


Wu contrasted the response of the current situation to the 2009 H1-N1 influenza pandemic, which the Centre for Disease Control and Prevention estimates killed between 150,000 and 575,000 people worldwide during its first year.


"The actions taken by the government were not to impose a travel limit," Wu said.

"In a lesser situation, with a lesser risk, why should tougher measures be imposed in this case?"


She said the restrictions were also placing stress on international students.


Forty percent of international Chinese students are still overseas waiting for the travel ban to lift.


Students that have arrived in New Zealand are facing xenophobia due to misinformation circulating here and those students still overseas feel uncertain about their schooling futures, she said.


"That's why we are keeping in very close touch with the universities and schools to ensure their rights and interests are not impeded by this limit."


She said New Zealand and China have a solid foundation to their bilateral relationship and she hopes that will mean the nations find a "proper way to prevent and control this epidemic".

Xu ended her section on the bilateral relationship by quoting a saying: "when in prosperity friends know us, and when in adversity we know our friends". 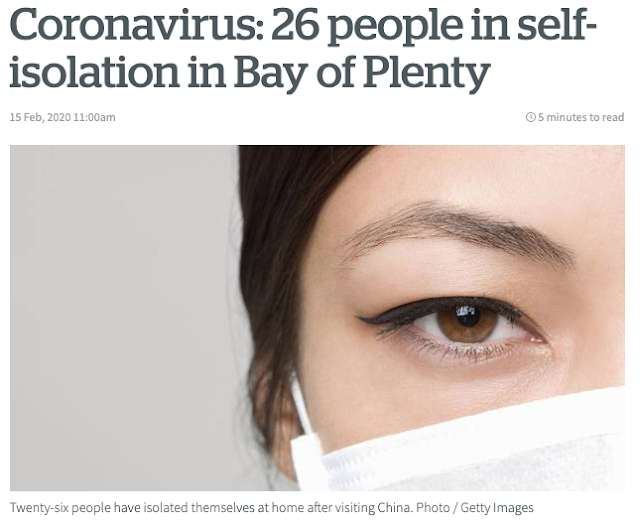 Toi Te Ora Medical Officer of Health Dr Neil de Wet says that 26 people are in self-isolation for COVID-19, also known as coronavirus, in the Bay of Plenty District Health Board region.

On Saturday night, the Ministry of Health reported that there continue to be no confirmed cases of COVID-19 in New Zealand.

The people who are self-isolating have been registered with the Ministry of Health, and the local medical officer of health on call will be notified if any of them develop any symptoms that may be indicative of the virus.

Self-isolation means staying away from situations where you could infect other people, says the Ministry of Health website.


“This means any situation where you may come in close contact with others, face to face contact closer than 1 metre for more than 15 minutes, such as social gatherings, work, school, child care/pre-school centres, university, polytechnic and other education providers, faith-based gatherings, aged care and health care facilities, prisons, sports gatherings, restaurants, and all public gatherings.”

See also - No COVID-19 virus cases in the Bay 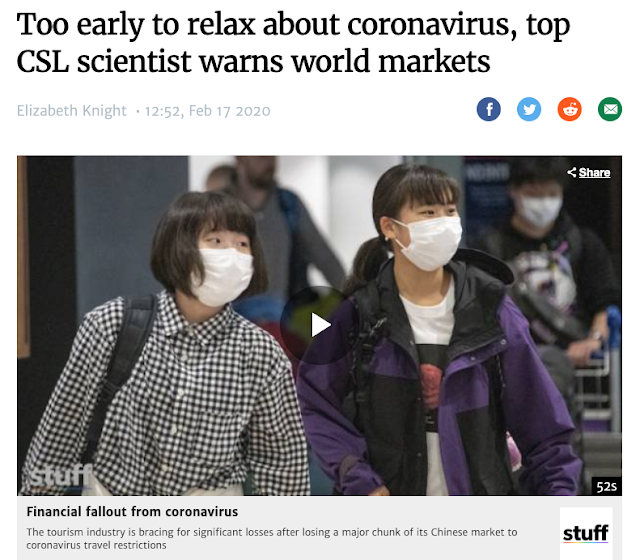 https://www.stuff.co.nz/business/world/119575115/too-early-to-relax-about-coronavirus-top-csl-scientist-warns-world-markets?cid=app-iPad
Posted by seemorerocks at 16:35