When the first reports came out about the 1918 "Spanish" flu they said more or less what was being said in the media in 2020. 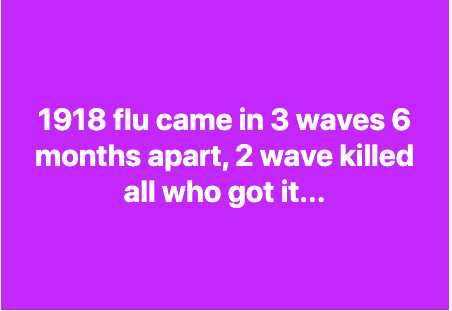 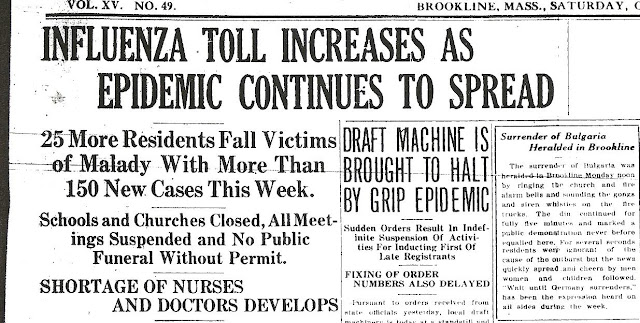 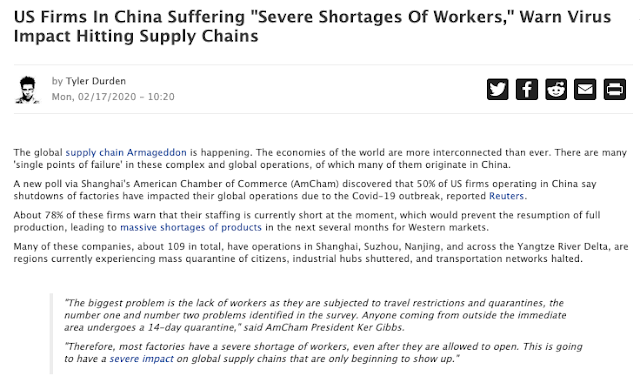 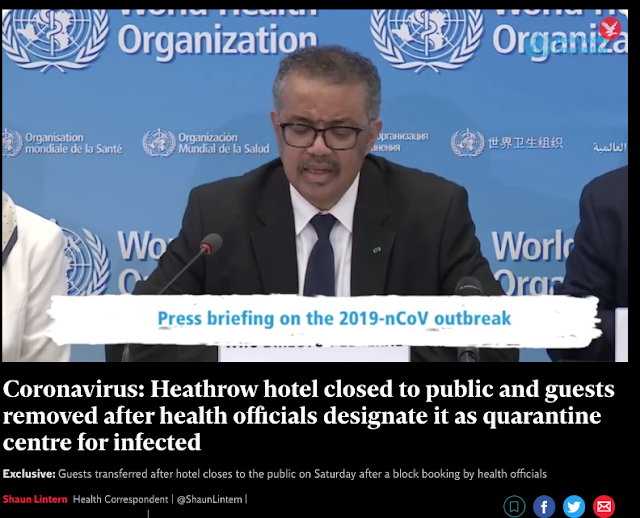 A hotel near Heathrow has been closed to the public and designated as a coronavirus quarantine centre as health officials prepare for more cases in the UK.


The Holiday Inn Heathrow Ariel hotel closed on Saturday with staff told it would not reopen for bookings until next month at the earliest.


Sources told The Independent the hotel has been block booked as a potential quarantine zone for international visitors to the UK who develop coronavirus or for Britons evacuated to the UK from overseas.


Guests booked at the three-star hotel, which is operated under franchise from the InterContinental Hotels Group (IHG), have been transferred to sister hotels.

The hotel’s general manager, who did not give his name, confirmed the hotel had been closed but he emphasised there had not been any cases of coronavirus at the hotel. 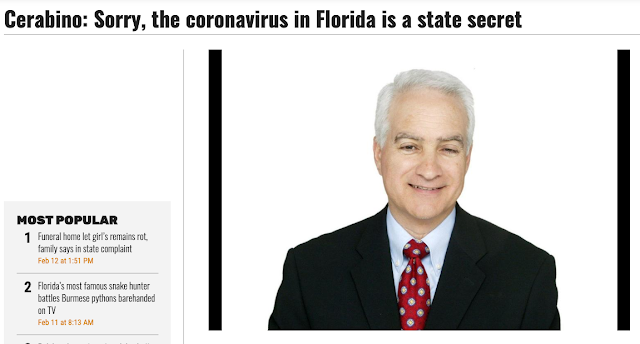 What’s going on with the coronavirus in Florida?

Sorry, you can’t find out. It’s a secret.

It doesn’t sound like it should be a secret, but according to the Florida Department of Health, it has to be a secret.

“We are bound by a specific statute and can’t release the information,” explained Alberto Moscoso, the communications director for the Florida Department of Health.

The state gave regular public updates on Zika, a mosquito-borne virus that infected more than 100 Floridians three years ago.

There was no problem with public updates then. But we know precious little about the coronavirus in Florida.

Gov. Ron DeSantis casually dribbled out a little information two weeks ago during a press event at Omni Middle School in Boca Raton, where he was touting an expansion of speech and debate programs in schools.

“Everybody to this date that has been tested has come back negative,” he said.

We don’t know anything about these everybodies or where they lived. Or about the somebody who got tested last week at Memorial Regional Hospital in Hollywood, according to the Sun-Sentinel, but not confirmed by the state.

Why the secrecy? If a virus that began in China two months ago and has already spread to 28 countries, including the United States, don’t the people of Florida have a right to be kept in the loop?

The state law cited is a passage in the Florida Administrative Code that says “all information contained in laboratory reports, notifiable disease or condition case reports and in related epidemiological investigatory notes is confidential.”

But the passage goes on to note three exceptions for releasing otherwise confidential disease or condition case reports to the public.

(1) If the state’s health department determines public release of information is warranted “due to the highly infectious nature of the disease.”

(2) If the release of information would be useful to reduce “the potential for further outbreaks.”

(3) If the release helps to identify or locate people in contact with the cases.

If one of those conditions is true, it trumps the patient confidentiality requirement.

In the case of the coronavirus, it wouldn’t be a stretch to argue that there’s more than enough wiggle room in the law for the state health department to be transparent with the public.

Using “patient privacy” as an excuse to tamp down information on a virus well on its way to becoming a pandemic says more about tourism than public safety in Florida.

The lack of openness has become a trend in Florida, as more and more public records become private.

For example, this legislative session, lawmakers are proposing a bill that would keep their home addresses private.

Not disclosing their home addresses is more than an unwarranted personal safety issue. It shields the public from the valuable information of knowing which representatives live outside their own legislative districts.

Another example of codified secrecy run amok is the recently passed Marsy’s Law, a state Constitutional amendment that was sold primarily as a way to inform crime victims about the dates their cases would be heard in court.

It also has a provision that allows crime victims to have their identities kept secret in public records. This provision is now being used by police officers who are involved in situations where they use force in the line of duty.

By claiming that they are crime victims while making an arrest, some officers are using Marsy’s Law to shield their names from being disclosed in use-of-force cases, including ones where they use lethal force.

And to take it even further, the Jacksonville Police Department is using the law to keep secret the addresses where some crimes occur.

So, I guess it shouldn’t be surprising that Florida’s reaction to a viral outbreak is less public information, not more.

It’s all part of the secrecy virus on the loose in Florida. 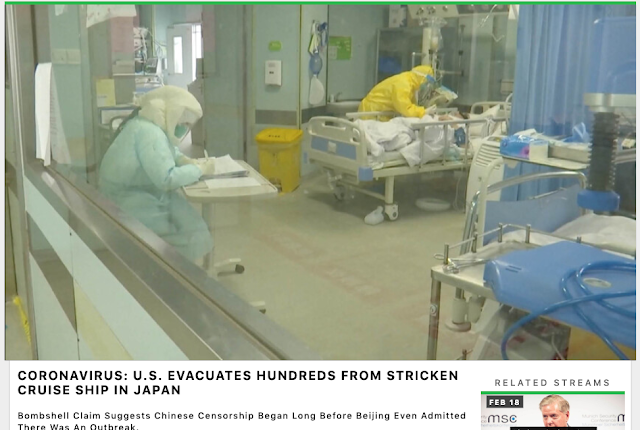 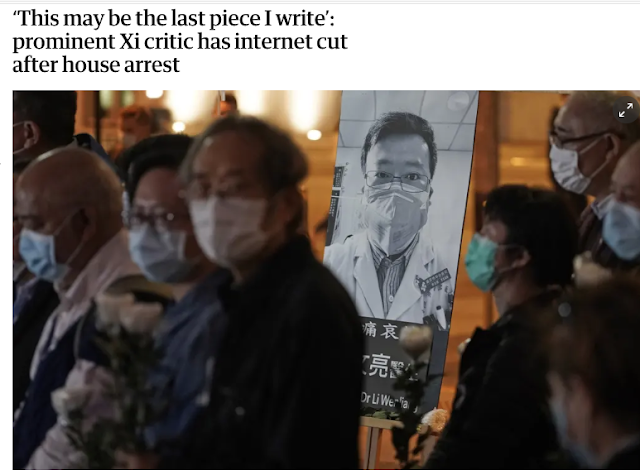 The Chinese professor Xu Zhangrun, who published a rare public critique of President Xi Jinping over China’s coronavirus crisis, was placed under house arrest for days, barred from social media and is now cut off from the internet, his friends have told the Guardian.

Xu’s passionate attack on the government’s system of controls and censorship, Viral Alarm: When Fury Overcomes Fear, was published this month – a rare, bold expression of dissent from the liberal camp under Xi’s rule.

A friend of Xu’s who spoke on Sunday on the condition of anonymity to avoid reprisals said police placed Xu under house arrest soon after he returned to Beijing from his lunar new year break at his home town in Anhui province.

“They confined him at home under the pretext that he had to be quarantined after the trip,” the friend said. “He was in fact under de facto house arrest and his movements were restricted.” 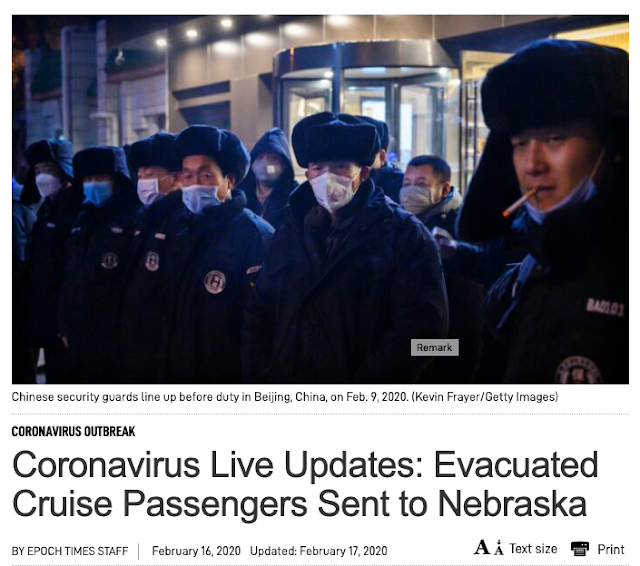 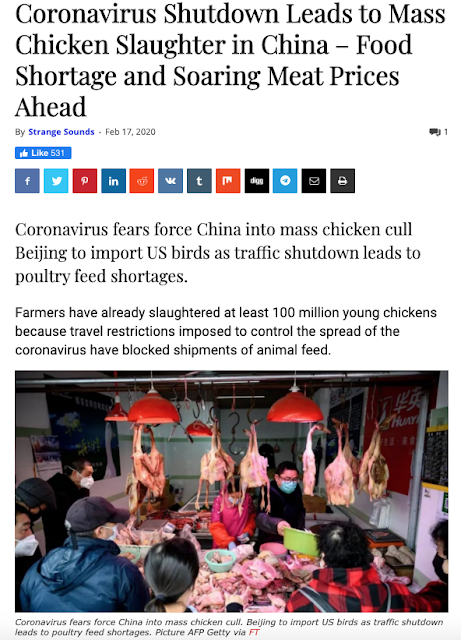 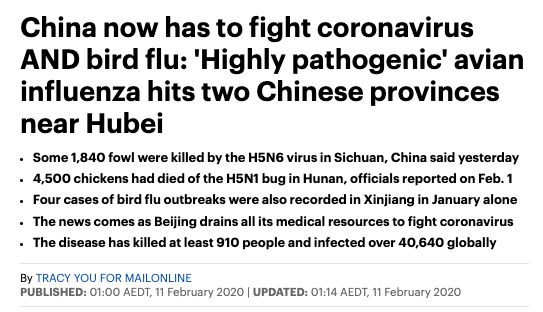 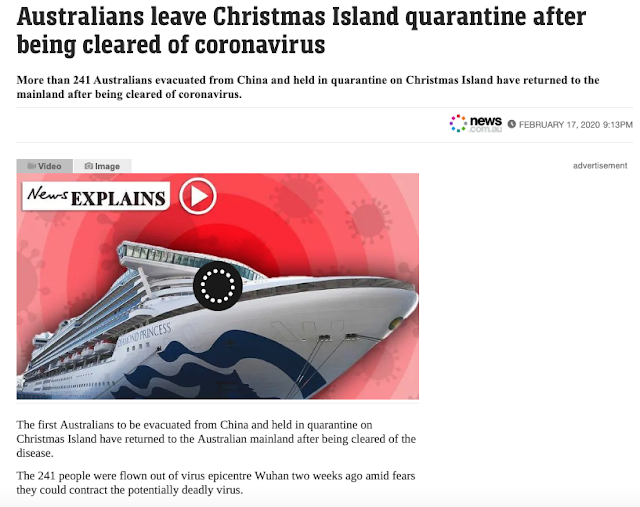 https://www.news.com.au/lifestyle/health/health-problems/australians-leave-christmas-island-quarantine-after-being-cleared-of-coronavirus/news-story/167e44e0a0e59a9d5845c2fcc42597fe
Posted by seemorerocks at 17:54