Panic as coronavirus spreads in Italy 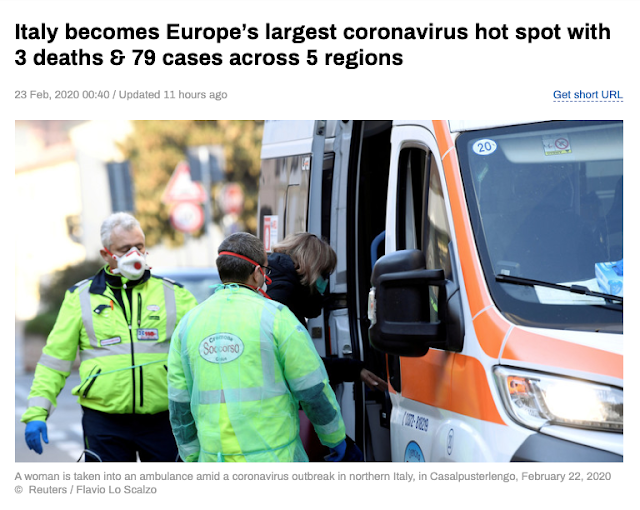 The number of confirmed Covid-19 coronavirus cases has soared to at least 79 in Italy, forcing authorities to introduce increasingly strict containment and quarantine measures in the northern regions of Lombardy and Veneto.

A 78-year-old man died near Padua in the Veneto region on Friday night, and two elderly women, one of them suffering from cancer, died in two towns south and east of Milan.

At least 17 people have been confirmed infected in Veneto so far, including the latest victim’s wife and daughter, as authorities are still mulling whether the Carnival of Venice events should be cancelled. In neighboring Lombardy, there are 54 cases, including one in Milan – a city with a population of 1.4 million, where Women’s Fashion Week is currently taking place.

There are also two cases in northern Emilia Romagna and two in central Lazio, as well as in Piedmont, according to the head of Civil Protection, Angelo Borrell. At least 18 of the patients are in serious condition in intensive care.

The outbreak is believed to have originated in a town southeast of Milan, where 50,000 residents of Codogno and nearby towns were advised to stay indoors and avoid public gatherings, which are now being cancelled en masse. 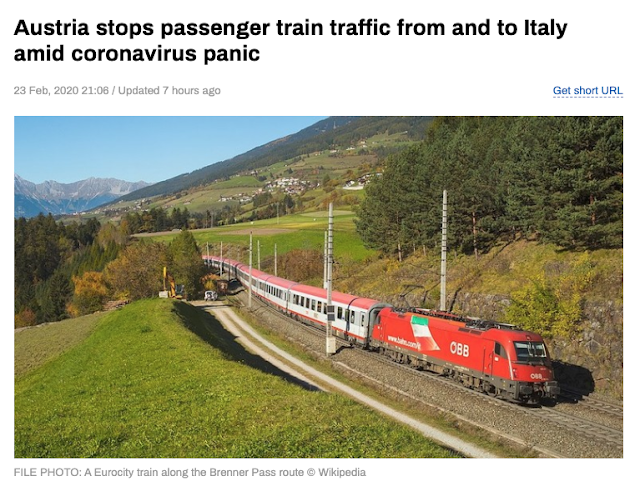 Authorities in Austria have stopped an incoming train at the Italian border, after it emerged that two passengers may be infected with the Covid-19 coronavirus. Later, all train traffic to and from Italy was halted.

The Eurocity 86 train was stopped at the Brenner Pass border crossing on Sunday, after officials at Italian State Railways told their Austrian counterparts that two passengers on board had fever symptoms consistent with the Covid-19 coronavirus.

The train, bound for Munich in Germany, was halted and returned to the Italian side of the alpine crossing, Interior Minister Karl Nehammer confirmed.

Austrian authorities later stopped all train traffic to and from Italy, tabloid newspaper OE24 said on its website.

After the decision by Minister Azzolina to invite the universities in northern Italy to close, the stop came for schools. First in Lombardy and Veneto and now also in Emilia Romagna.

Consequently to the provisions of the decree approved by the Council of Ministers, "for precautionary reasons, the University Institutions and those of Higher Musical Artistic and Coreutical Education present in the Regions of Lombardy, Veneto and Emilia-Romagna are invited to suspend until February 29, 2020, the didactic activity », wrote Minister of Education Lucia Azzolina .

The Ministry recalls that the Council of Ministers, yesterday evening, defined appropriate measures to avoid the spread of Covid19 and further containment measures. Among the forecasts adopted by the Government there was also that relating to the possible suspension from the frequency of higher education activities, without prejudice to the training activities carried out at a distance.

Then came the decisions of individual mayors and regions, starting with the choice made by Beppe Sala this morning.

Schools closed in Lombardy, Piedmont, Veneto and FVG
The president of the Lombardia Fontana region, in concert with the Minister of Health Roberto Speranza , has decided to close all schools of all levels in the region as a consequence of the coronavirus emergency .

The ordinance, reads a note from the Region, provides for the «suspension of the educational services of children and schools of all levels, as well as the attendance of school and higher education activities, professional courses, masters courses for health professions and universities for the elderly, with the exception of the trainees and trainees of the health professions, with the exception of distance training activities ".

The decision of the Lombard governor follows the order ordered by the mayor Beppe Sala during a summit in the prefecture in Milan on the emergency for the coronavirus. The decision follows the one already taken yesterday which ordered the suspension of activities in Lombardy universities . At 12 o'clock an operational table will meet at the headquarters of the Municipality of Milan, where it will be evaluated by the mayors of the metropolitan area if the schools of the other 133 municipalities will also be closed.

"Even on a prudential level - Sala said - I think schools should be closed in Milan and I will propose to the president of the Lombardy Region, Attilio Fontana , to widen the intervention at the metropolitan city level. It is a prudential intervention - concluded Sala -. To date, let's do it for a week and I think it will be enough ».

At Palazzo Marino, seat of the Municipality of Milan, Sala decided to establish a permanent table with the general manager and all the directors of the municipal sectors. The table will serve: "to see the rules for the municipal offices, we will hear the presidents of the Municipalities and see what to do for the events since we are also in the carnival week".

Schools of all levels closed for a week also in Piedmont . This is what emerged from the security table underway in these hours at the Turin Civil Protection headquarters. The summit was attended by the president of the Piedmont region Alberto Cirio, the mayor Chiara Appendino, the prefect Claudio Palomba and the representatives of the police.

The governor of Veneto Luca Zaia signed with Minister Speranza the order with which all public, private and museum events are blocked, including the Carnival of Venice, as well as the closure of schools until March 1st.

"Closed schools and cultural and sporting events suspended on a date to be destined throughout the region". This is what the Government asked of the Friuli Venezia Giulia Region. The President of Fvg, Massimiliano Fedriga, announced this at a press conference from the regional civil protection office in Palmanova, specifying that the executive was asked to adopt the same measures envisaged in the nearby regions of Veneto, Lombardy, Emilia Romagna and Piedmont.

The Emilia-Romagna Region has decided to close schools until 1 March inclusive. In the morning, President Stefano Bonaccini explained: "We are examining and defining in all its aspects, also in light of the measures passed by the Council of Ministers yesterday evening".

Confirmation arrived in the afternoon: suspension of the activities of schools of all levels, kindergartens, universities, demonstrations and events and all forms of aggregation in public or private places, educational trips and competitions.

The president of the Autonomous Province of Bolzano , Arno Kompatscher, has signed an order that aims to limit the health risk of spreading the so-called Coronavirus. In South Tyrol, starting from tomorrow until Sunday 1 March, the socio-educational structures, public and private, dedicated to early childhood (nursery schools and company microstructures) will be closed. Furthermore, in the same period, didactic activities will be suspended at the University, the "Claudiana" School of Health and the "Monteverdi" Conservatory.

The regional councilor for health, Luigi Icardi has announced that for a week educational activities in Piedmont universities are suspended due to the Coronavirus issue.

Even the University of Genoa "has prudently decided to suspend all teaching activities (lessons and exams) for a week starting tomorrow, Monday 24 February". The rector of the Paolo Comanducci University announced this morning.

"The increasingly serious situation requires appropriate measures to be taken in the interest of the academic community and the Ligurian population - writes Comanducci - in order therefore to help reduce the movement of large numbers of subjects, given the large area of origin and the number of students of our university, we have decided to suspend all didactic activities for a week. By ensuring, as far as possible, that the academic calendar dates and deadlines will be adjusted accordingly. However, the university and its spaces remain open and accessible, including libraries ».

The Campus Bio-Medico University of Rome, for the principle of maximum precaution on the Coronavirus phenomenon, has ordered the postponement of the admission test to the Degree Course in Medicine and Surgery scheduled at the Fiera di Roma for Tuesday 25 February. Over 2,800 candidates from all over Italy are enrolled in the test, a part of which from the northern regions subject to restrictions by the institutions in charge.

The decision taken by the University is the result of the desire to protect the good of people's health, also in consideration of the origin of the candidates from all over Italy, and with a view not to disadvantage aspiring doctors from areas where restrictive measures are in place travel », explains the university.

"The Campus Bio-Medico University of Rome - continues the note - has always pursued the central role of the person and the common good as a mission and it is precisely in compliance with these principles that, although there are no restrictions on public events in Lazio or aggregation and despite the considerable organizational and economic inconvenience for the University, it has ordered the postponement of the test to a date to be assigned ».

The written and practical tests of the joint competition between the Local Health Authority of Bologna, the University Hospital of Bologna, the Local Health Authority of Imola and the Orthopedic Institute Rizzoli for the coverage of permanent positions are postponed to the Unipol Arena in Casalecchio di Reno (Bologna) in the profile of "Professional nurse healthcare worker" scheduled for 25 and 26 February.

The new call will be published on April 21, 2020 in the Official Journal of the Italian Republic - 4th Special Session 'Competitions and exams'. The postponement, the bodies involved let it know, "was provisionally taken in consideration of the fact that some candidates come from Municipalities subject to ordinances issued to contrast the spread of the coronavirus and that they advise against the circulation and attendance of crowded places".
Posted by seemorerocks at 17:52