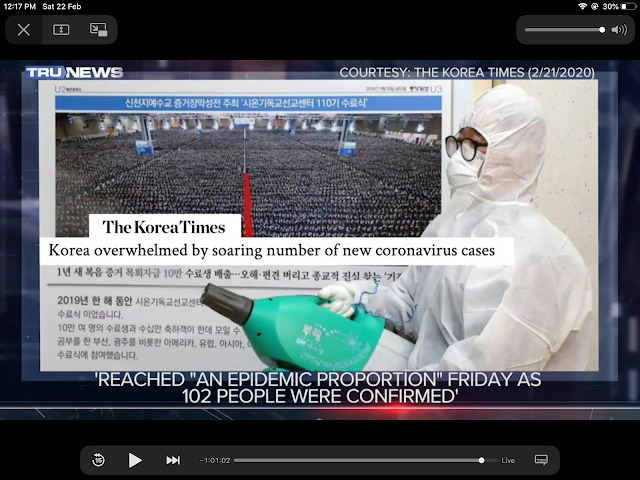 The coronavirus infection here reached "an epidemic proportion" Friday as 102 people were confirmed to have contracted the highly-contagious virus, raising the total to 206, according to government officials.

The number of COVID-19 (2019-nCoV) infections has quadrupled from 51 Wednesday with most new cases being traced to church services in the southeastern city of Daegu, according to the Korea Centers for Disease Control and Prevention (KCDC). On Thursday, 53 new cases were reported.

The total accumulated number of confirmed cases in Daegu and its neighboring North Gyeongsang Province stood at 153, with the number of cases linked to a Daegu church coming to 128.

The number of confirmed cases at the Daenam Hospital in Cheongdo, near Daegu, stood at 16, including five nurses, according to the KCDC.

KCDC director Jeong Eun-kyeong during a press briefing early in the day confirmed that the majority of the new cases were "linked to the Shincheonji Church of Jesus in Daegu, where the 31st patient, the country's possible 'super spreader,' attended worship services."

The 61-year-old woman tested positive for the virus earlier this week, having already attended worship services at the church on Feb. 9 and Feb. 16.

As the most new infections have been traced in the city of Daegu, the 2.5 million inhabitants have been asked to stay indoors. Daegu and its neighboring Cheongdo County were designated as "special management zones" earlier in the day.

An office worker living and working in Daegu who requested to remain anonymous had to return home when he got to work Thursday as one of the people confirmed to have the coronavirus worked at a neighboring office.

"Almost all business activities have stopped here in Daegu. People don't go to restaurants and eat home or have food delivered, avoiding contact with people as much as possible," he said. "There also are mounting complaints against Shincheonji Church of Jesus and its followers."

To contain the spread of the virus across the country, the Ministry of Health and Welfare will allow hospitals to separate respiratory patients from others to prevent human-to-human transmission while those infected with the virus are being treated at hospitals.

"All pneumonia patients in Daegu hospitals will also be checked for the virus," said Health Minister Park Neung-hoo during a separate briefing in Seoul.

In addition, three soldiers were confirmed to have contracted the virus Friday, including an Air Force officer at the Gyeryongdae military headquarters. According to the KCDC, three cases were confirmed ― one each in the Army, the Navy and the Air Force.

The health authorities said all the three service members had visited or contacted people from the city of Daegu.

Meanwhile, the Seoul Metropolitan Government announced it would ban any demonstrations in downtown areas including Gwanghwamun Square, in an effort to improve containment efforts as the potentially fatal illness spread across the country.

Seoul Mayor Park Won-soon also announced plans to shut down Seoul branches of the minor religious sect Shincheonji as the majority of the new cases appear to be related to the provincial church in Daegu. 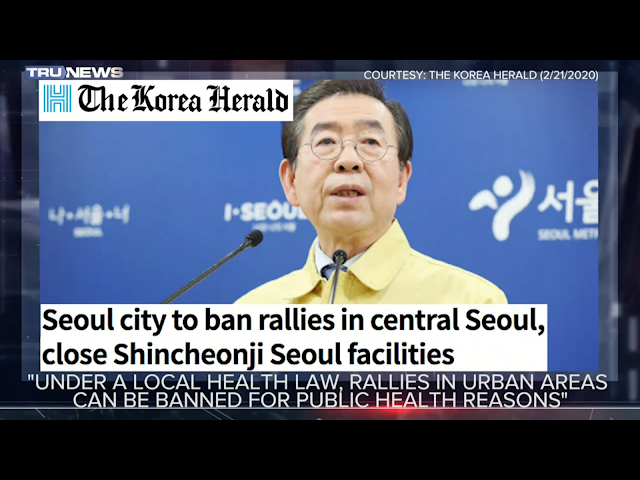 Seoul’s city government said Friday it will ban rallies in the center of the city and close down the facilities of the Shincheonji Church of Jesus in Seoul as part of efforts to rein in the spread of the COVID-19 virus.

“We plan to ban use of Seoul Plaza, Cheonggye Plaza and Gwanghwamun Plaza,” Seoul Mayor Park Won-soon said in a press briefing Friday, adding the municipality will notify rally organizers of the decision and consult with the Seoul Metropolitan Police Agency.

The unusual move is to protect the elderly who are especially vulnerable to contagious diseases, he said, referring to massive weekend rallies in central Seoul by anti-government, conservative groups mostly comprised of those in their 60s and older. 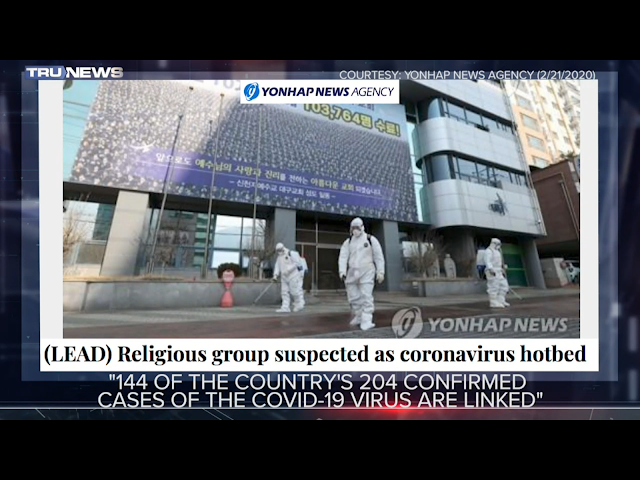 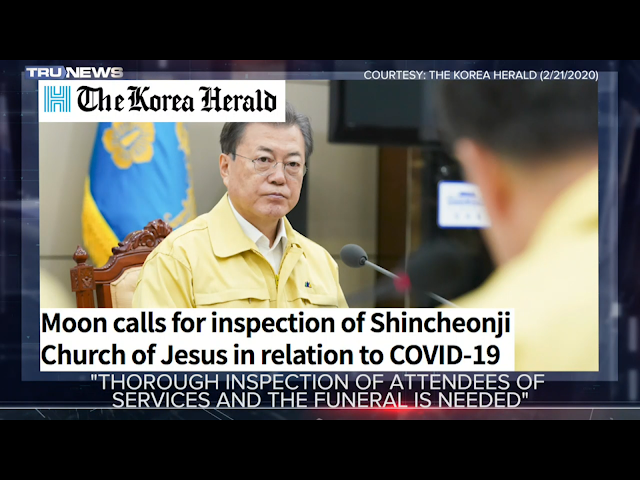 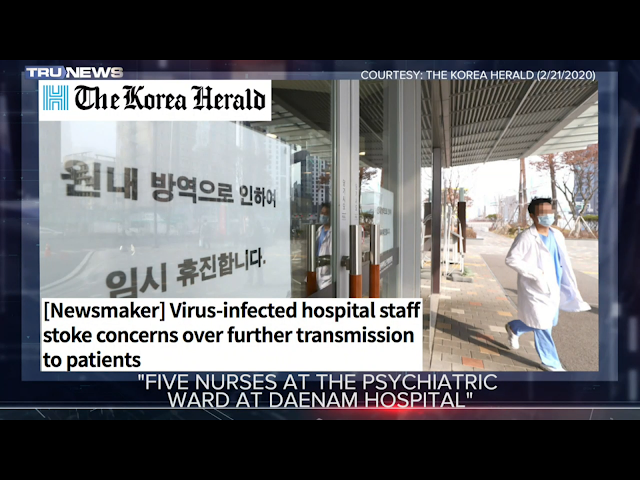 Some nurses at a hospital here have contracted the new coronavirus, fueling fears that more virus cases will be identified, public health officials said Friday.

The Korea Centers for Disease Control and Prevention (KCDC), and public health authorities in North Gyeongsang Province said Thursday that five nurses at the psychiatric ward at Daenam Hospital in Cheongdo, 320 kilometers southeast of Seoul, have all tested positive for COVID-19.

The country's first death from the virus was reported at the same hospital.

The country's health authorities said a total of 16 people have tested positive for the virus out of 600 patients and medical staff at the hospital.

As of Friday morning, the country has reported 156 cases of COVID-19. In just three days, the number of virus infections almost tripled, most of which -- 82 cases -- have been traced to church 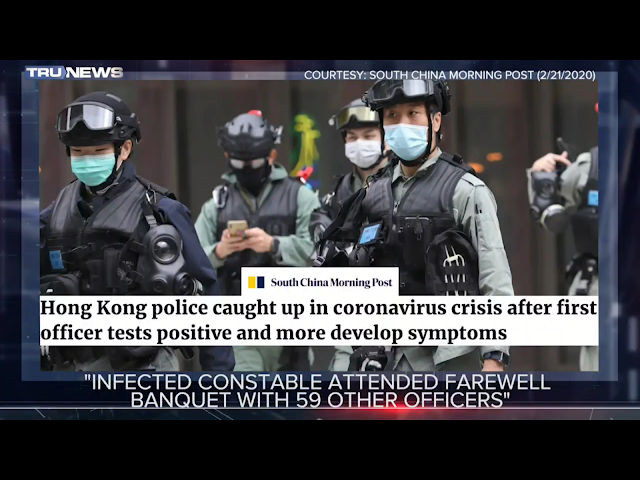 Hong Kong’s embattled police force is caught up in the coronavirus crisis after an officer contracted Covid-19 for the first time and four colleagues who attended a recent banquet with him developed symptoms, while more than 50 others at the gathering were placed under quarantine.

The city had no new confirmed infections to report on Friday, with the total remaining at 69, but the police infection scare prompted health authorities to warn against large social gatherings.

“As there are now more cases and the situation is becoming more complicated, we will ask police to help us with their supercomputer,” Dr Chuang Shuk-kwan of the Centre for Health Protection said.

She was referring to the police force’s Major Incident Investigation and Disaster Support System, which was used during the 2003 Sars epidemic for contact tracing and determining areas of high infection risk.

One more Hongkonger infected on Diamond Princess, total at 66
22 Feb 2020
However, Chuang noted that the city was still not experiencing a community outbreak. 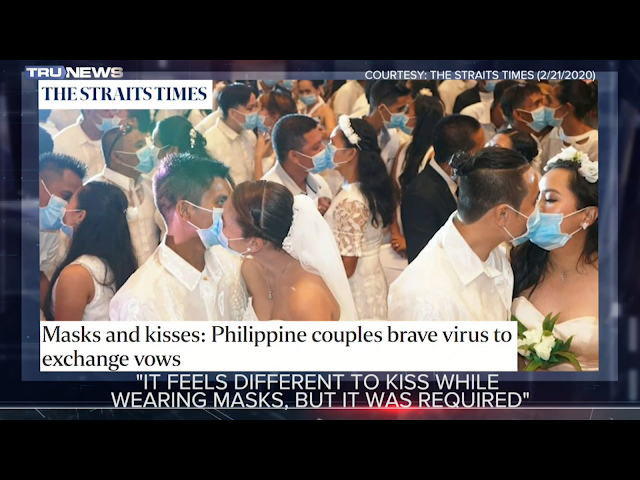 Wearing blue surgical masks amid a coronavirus outbreak, 220 couples exchanged vows and kisses in the central Philippines to launch their married lives.

Lovers and their relatives braved the virus, which has killed 2,236 people, to attend Thursday's (Feb 20) mass ceremony sponsored by the coastal city of Bacolod.

The lobby of city hall was a sea of white shirts and gowns, dotted with the blue of the masks, which were mandatory for all, and provided by the authorities.

"It feels different to kiss while wearing masks, but it was required," said John Paul Inventor, 39, who married his partner of seven years and the mother of their two children.

"The place was jam-packed."

Participants had to complete health declarations detailing a travel history for 14 days, the quarantine period across the globe for arrivals from China, and the maximum incubation time for the virus.

Unfortunately this article is behind a paywall 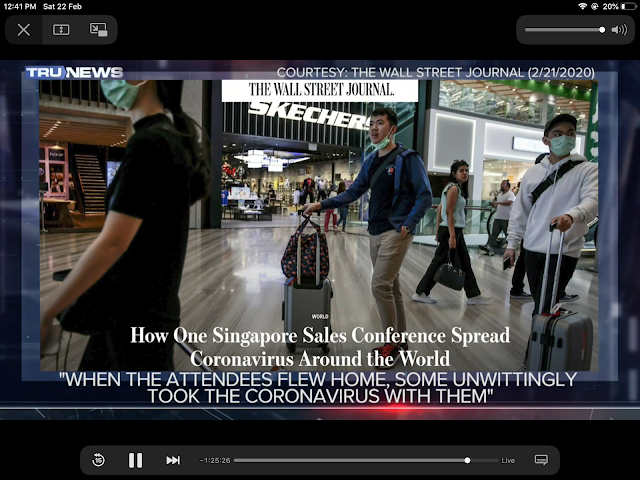 Last month, 109 people gathered in a Singapore hotel for an international sales conference held by a U.K.-based company that makes products to analyze gas.

When the attendees flew home, some unwittingly took the coronavirus with them.

This illustrates the spread... 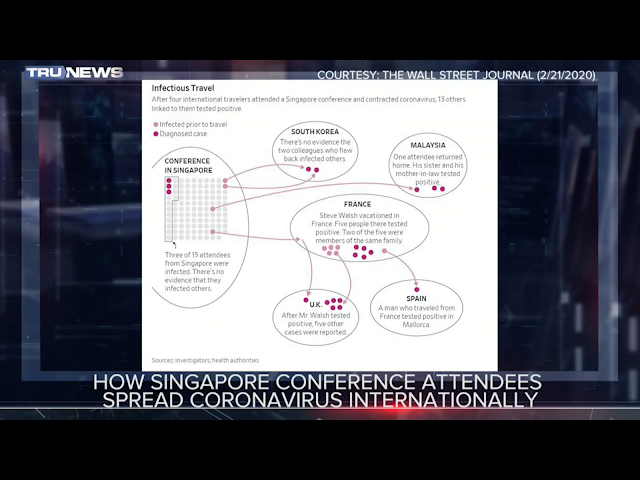 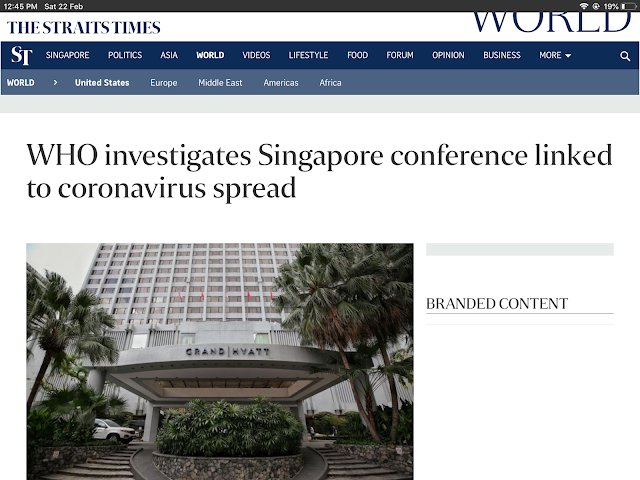 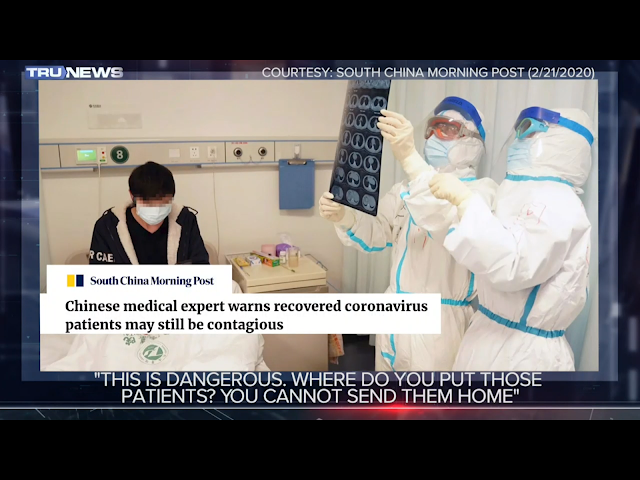 SINGAPORE (REUTERS) - At least three employees of a multinational company that held a meeting of more than 100 international staff in Singapore have contracted the new coronavirus, sparking a World Health Organisation (WHO) investigation of the case.

Malaysia and South Korea have confirmed three cases of the virus related to the mid-January company meeting held with 94 overseas staff at the Grand Hyatt hotel, and Singapore said late on Wednesday (Feb 5) that four other attendees were showing symptoms.
The authorities have not revealed the name of the company that held the meeting or said what business it is involved in.
Malaysian health authorities have said people from China including one from the city of Wuhan, where the virus emerged in December, attended.
"WHO is coordinating with relevant ministries of health in relation to it," Ms Olivia Lawe-Davies, a spokesman for the WHO, said in response to questions from Reuters.
"As countries are stepping up surveillance, the detection of more cases of local transmission can be expected."
Singapore has reported 28 cases of the coronavirus, including some involving person-to-person transmission.
The cases linked to the Singapore business meeting provide more evidence the virus is spreading through human-to-human contact outside China, which the WHO has said is deeply concerning and could signal a much larger outbreak.
China reported its biggest daily jump in fatalities from the virus on Thursday, up 73 to 563, although there have been only two reported deaths outside mainland China.
Malaysian health authorities first revealed the link to the Singapore business meeting when they confirmed the case of a 41-year-old Malaysian who had attended it, along with colleagues from China.
South Korea subsequently confirmed two cases involving South Koreans who attended the conference. The Koreans and the Malaysian shared a buffet meal during the conference, South Korean media reported.
Of the 15 Singapore attendees, four have been referred to its National Centre for Infectious Diseases, Singapore's health ministry said. All the overseas attendees have left Singapore, the ministry added.
A spokesman for the Grand Hyatt, Mr Gerald Kheng, said the hotel had been deep cleaned after it was first informed of the incident by the health ministry on Tuesday and it was not aware of any other cases among guests or staff.
The city-state says no evidence has emerged of widespread community spread but it announced new precautionary measures on Tuesday including halting group activities such as school assemblies.
Several firms in Singapore have suspended business and media events, including a big travel fair, but the Singapore Airshow is set to go ahead next week, albeit on a smaller scale. 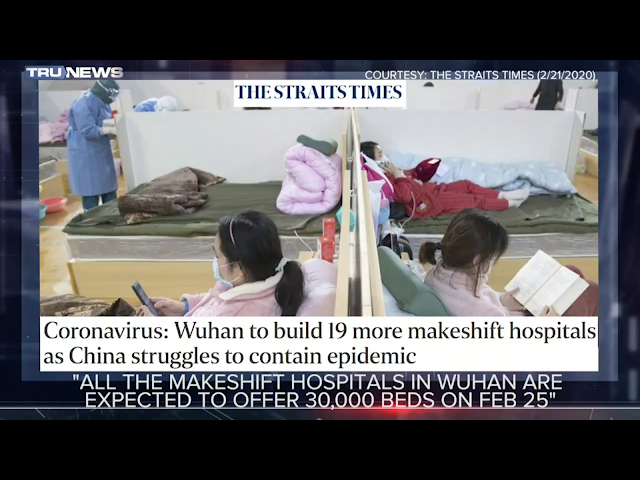 
Upon their completion, all the makeshift hospitals in Wuhan are expected to offer 30,000 beds on Feb 25, said Mr Hu Yabo, deputy mayor of Wuhan at a press briefing on epidemic prevention and control.


To date, Wuhan has converted 13 existing venues into temporary hospitals, with a total of 13,348 beds, and about 9,313 beds have been put into use to treat patients with mild symptoms, said Mr Hu. 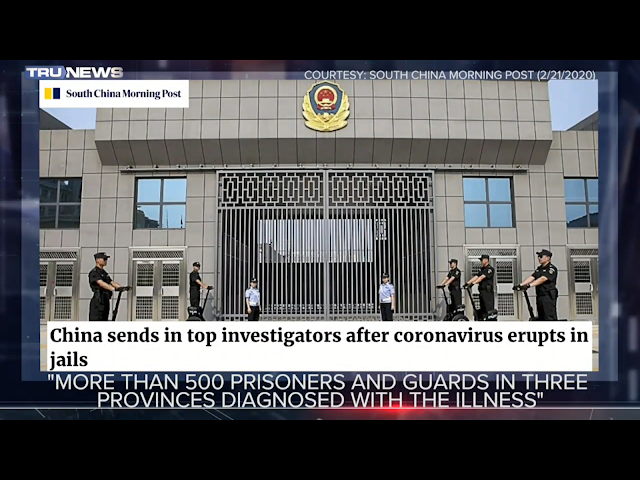 Beijing has deployed a team from China’s top law enforcement body to investigate how a coronavirus outbreak erupted in the country’s cramped prison system.

Ministry of Justice officials said on Friday that more than 500 prisoners in five prisons in three provinces had contracted the virus, which has so far sickened almost 80,000 people and killed more than 2,000 people, mostly in China.

“With a heavy heart and sense of responsibility, I am reporting to you that as of February 20, five prisons in Hubei, Shandong and Zhejiang have reported infections among their populations,” He Ping, head of the ministry’s Bureau of Prison Administration, said in Beijing.


More than half of the cases were in the central Chinese province of Hubei, the epicentre of the epidemic, with 230 cases at Wuhan Women’s Prison and 41 cases at Shayang Hanjin Prison.
https://www.scmp.com/news/china/society/article/3051858/china-sends-top-investigators-after-coronavirus-erupts-jails 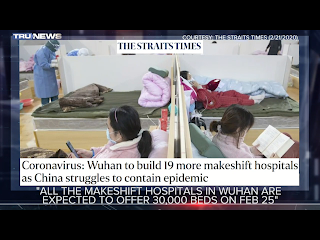 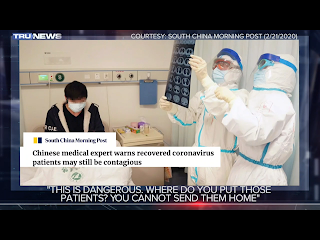 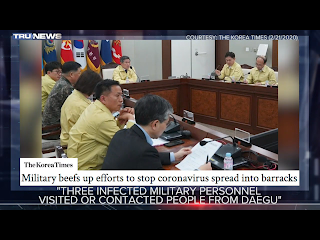