A conspiracy of silence over South Texas Nuclear - Fukushima in Texas?

Susan Dancer is President of the South Texas Association for Responsible Energy, headquartered in Bay City, Texas – yes that Bay City.  She spoke from a site she evacuated to with all the animals in the animal rescue that she runs, Texas Blessings. 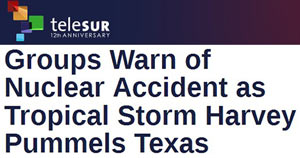 Reuters, Aug 29, 2017 (emphasis added): [W]atchdog groups called for the [South Texas Project nuclear] facility to shut due to Tropical Storm Harvey… The groups expressed concern about workers at the plant and the safety of the general public if Harvey caused an accident at the reactors… When asked if the plant would shut if flooding worsened, [spokesman Buddy Eller] said “We are going to do what’s right from a safety standpoint.”… Eller said 250 “storm crew” workers were running the plant…Personnel from the U.S. Nuclear Regulatory Commission (NRC) are also at the plant, assessing storm conditions…

teleSUR, Aug 29, 2017: Groups Warn of Nuclear Accident… In the midst of Tropical Storm Harvey’s drenching onslaught, energy watchdogs aresounding the alarm over the continued operation of two nuclear reactors in East Texas that are running at full capacity despite what they claim is the clear potential for a major disaster… [The nuclear plant] risks being flooded as water pours across the region, threatening the embankment wall shielding the power plant… Beyond Nuclear is one of three groups calling for an immediate shutdown of the twin reactors in case the embankment wall surrounding the plant is breached, which could lead to electrical fires and “cascading events” could result in an accident that threatens major core damage… Some fear the threat of a new Fukushima-style disaster…

Common Dreams, Aug 29, 2017: The South Texas Project nuclear power facility in Bay City, Texas could be under extreme threat from historic flood waters, groups warned… energy watchdogs groups are warning of “a credible threat of a severe accident” at two nuclear reactors… [They] are calling for the immediate shutdown of the South Texas Project (STP) which sits behind an embankment they say could be overwhelmed by the raging flood waters and torrential rains… Both the U.S. Nuclear Regulatory Commission and the STP operator have previously recognized a credible threat of a severe accident initiated by a breach of the embankment wallthat surrounds the 7,000-acre reactor cooling water reservoir,” said [Beyond Nuclear's] Paul Gunter… [Harvey] was declared the most intense rain event in U.S. history… [B]reach of the embankment wall surrounding the twin reactors would create “an external flood potentially impacting the electrical supply from the switchyard to the reactor safety systems.” In turn, the water has the potential to “cause high-energy electrical fires and other cascading events initiating a severe accident leading to core damage.” Even worse, they added, “any significant loss of cooling water inventory in the Main Cooling Reservoir would reduce cooling capacity to the still operating reactors that could result in a meltdown.” With the nearby Colorado River already cresting at extremely high levels and flowing at 70 times the normal rate, Karen Hadden, director of SEED Coalition, warned that the continue rainfall might create flooding that could reach the reactors… “Our 911 system is down, no emergency services are available, and yet the nuclear reactors are still running… This is an outrageous and irresponsible decision,” declared [Susan Dancer of the South Texas Association for Responsible Energy]. “This storm and flood is absolutely without precedent even before adding the possibility of a nuclear accident that could further imperil millions of people who are already battling for their lives.” As Harvey hovers over the coastal region, heavy rains are expected to persist for days…

Beyond Nuclear, Aug 29, 2017: The NRC and South Texas have refused to provide any public information on the status of the water level within in the reservoir… 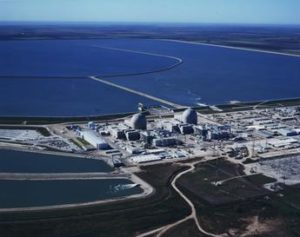 Two nuclear reactors at the South Texas Project (STP) near Bay City, Texas should be shut down immediately in order to protect public safety in the wake of Hurricane Harvey, warned three watchdog groups today. With additional rainfall and increased flooding risks anticipated, the groups are calling on the Nuclear Regulatory Commission, the Governor of Texas, the Electric Reliability Council of Texas (ERCOT) – the Texas Grid Operator – and utility owners of the nuclear reactors to take action immediately.

“A county-wide emergency evacuation notice was issued last week for all residents to be out ahead of Harvey’s landfall,” said Susan Dancer, President of the South Texas Association for Responsible Energy. “In an even more aggressive move Sunday night, the Bay City Mayor and Matagorda County Judge issued mandatory evacuation orders effective immediately as Bay City is expected to be ten feet under water in a flood of a scale we’d never even imagined, much less experienced. I loaded up my animals and fled my Bay City home, not even taking time to take any possessions with me. As we tried to flee, water was already flowing across many roads. Our 911 system is down, as are our police and fire department’s phone and dispatch systems. No emergency services are available. All businesses are shuttered and most are taking on water. Refineries have shut down.

“It’s an outrageous and reckless decision that the nuclear reactors are still running. Why aren’t they in cold shutdown with only a skeleton crew? Where is the concern for employees and their families? Why is corporate profit being prioritized over caution and good judgment?” asked Dancer.

“Sometimes the unimaginable really happens, as we learned from the disaster in Japan. This storm and flood is absolutely without precedent even before adding the possibility of a nuclear accident that could further imperil millions of people who are already battling for their lives,” added Dancer.

“The Colorado River is cresting extremely high and flowing at 70 times the normal rate. It’s expected to approach flood stage (44 feet) near Bay City today, and exceed flood stage on Wednesday, Thursday and Friday.” said Karen Hadden, Director of SEED Coalition, “Flood waters reaching the nuclear reactors could make operation increasingly dangerous and the rains are expected to continue. There is plenty of reserve capacity on our electric grid, so we don’t have to run the reactors in order to keep the lights on. With anticipated flooding of the Colorado River, the nuclear reactors should be shut down now to ensure safety.”

“Both the NRC and the operator have previously recognized a credible threat of a severe accident initiated by a breach of the embankment wall that surrounds the 7,000-acre reactor cooling water reservoir,” said Paul Gunter, Director of the Reactor Oversight Project with Beyond Nuclear in Takoma Park, MD, referencing a 12-mile long earth and cement dike that surrounds South Texas Project’s Main Cooling Reservoir. The top of the cooling reservoir wall is at 67-feet above mean sea level with the reactor site situated below at 29-feet above mean sea level. The NRC is not providing a status report on the water level in the reservoir where the normal maximum operating level is 49-feet above mean sea level.

“However remote, it’s simply prudent that the operator put this reactor into its safest condition, cold shutdown,” Gunter concluded.

The watchdog groups pointed out that the Fukushima disaster showed the world that an energy asset can turn into a multi-billion dollar liability overnight. “We should do all we can to prevent such a mistake. Governor Abbott, the Nuclear Regulatory Commission and STPNOC should take action now to ensure that the reactors shut down now, before the deluge of hurricane floodwaters hits, risking an emergency situation,” concluded Hadden

"This storm and flood is absolutely without precedent even before adding the possibility of a nuclear accident that could further imperil millions of people who are already battling for their lives."

As record-breaking rainfall and unprecedented flooding continue to batter the greater Houston area and along the Gulf coast on Tuesday, energy watchdogs groups are warning of "a credible threat of a severe accident" at two nuclear reactors still operating at full capacity in nearby Bay City, Texas.

Three groups—Beyond Nuclear, South Texas Association for Responsible Energy, and the SEED Coalition—are calling for the immediate shutdown of the South Texas Project (STP) which sits behind an embankment they say could be overwhelmed by the raging flood waters and torrential rains caused by Hurricane Harvey.