See how methane emissions have changed since 2006 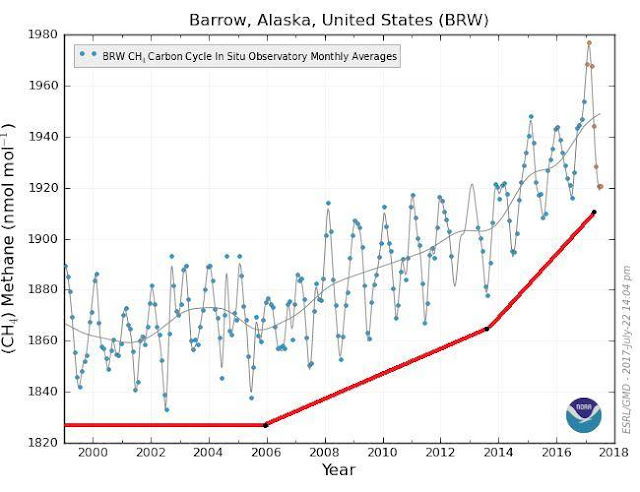 Methane Release Rate at Barrow for those of you who do not think it is increasing. This is from their In Situ data that NOAA always TRIMS. As we have noted in the past, they love to cut off the higher values.

Never the less, what they have charted is frightening if you know what a rapidly increasing methane release rate portends. I know, because I have been tracking it for the past few years.

I am only interested in the two inclining lines. The flat line before it only indicates that during those years there was no great rise in Methane. Had I gone back 20 years earlier, you would see a definite incline for that period, too.


As if we need to be told – although, it seems Michael Mann and others do!

Thawing tundra may be allowing long-buried pockets of methane to be released into the atmosphere, new research suggests. A study surveying the Mackenzie Delta in Canada, published Wednesday in the journal Scientific Reports, suggested that these methane "seeps" on the tundra may be more problematic than previously thought.

The study finds that 17 percent of methane emissions in the area came from these seeps, despite emissions hotspots only covering one percent of the tundra's surface area. The authors wrote that warming will "increase emissions of geologic methane that is currently still trapped under thick, continuous permafrost, as new emission pathways open due to thawing permafrost."

"We were a bit surprised … we saw these very strong emissions. It means a very tiny fraction of the area produces quite a big share of the estimated annual emissions," professor Torsten Sachs, one of the researchers, told The Independent.

As reported by Inside Climate News:

"This is another methane source that has not been included so much in the models," said the study's lead author, Katrin Kohnert, a climate scientist at the GFZ German Research Centre for Geosciences in Potsdam, Germany. "If, in other regions, the permafrost becomes discontinuous, more areas will contribute geologic methane."