News out of Israel 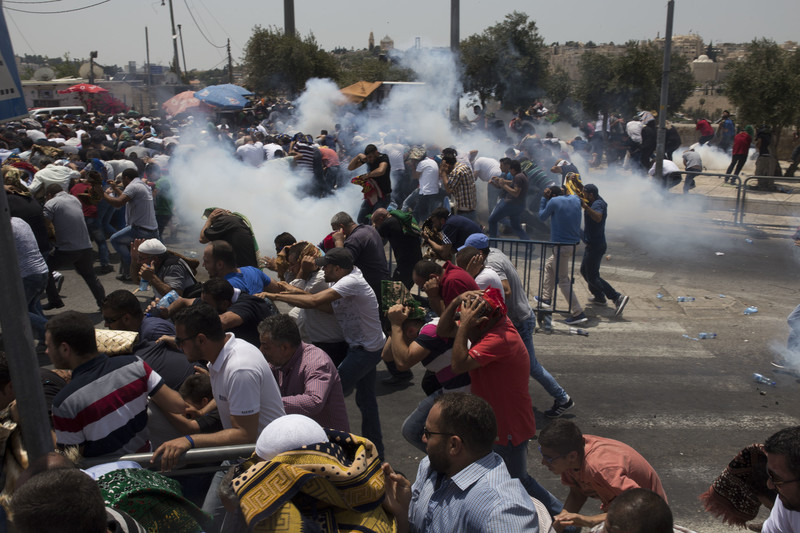 Three Palestinians were killed and hundreds more wounded on Friday as thousands protested across the occupied West Bank and Gaza Strip over new Israeli measures infringing on Palestinian worship at al-Aqsa mosque in East Jerusalem.

Three settlers were fatally stabbed in a West Bank settlement later that night.

The bloodshed followed a week of civil disobedience in Jerusalem with worshippers performing prayers outside the gates to the al-Aqsa mosque compound.

The mosque compound was reopened on Sunday but only after Israel had unilaterally installed security cameras and metal detectors at the gates, sparking protest and international warnings against changing the delicate status quo at the site.

Israeli Prime Minister Benjamin Netanyahu’s cabinet decided early Friday to leave the metal detectors in place, rebuffing dissent from Israel’s domestic intelligence apparatus and the body that oversees its military occupation regime, both of which urged a solution that would allow Israel to back down while saving face.

Israeli police meanwhile prevented Palestinian men under the age of 50 from accessing the site on Friday.

Al-Aqsa, which Muslim tradition holds is the site from where the Prophet Muhammad ascended to Heaven during the Night Journey, is also a touchstone of Palestinian identity. Israeli provocations there have precipitated major episodes of violence in the past.

Unchecked assaults and incursions on al-Aqsa by government-backed extremist Israeli groups that seek to destroy the mosque and replace it with a Jewish temple sparked a wave of protest and violence in the autumn of 2015 that soon spread to other areas of historic Palestine, particularly the Hebron area of the West Bank.

Witnesses told media that Muhammad Mahmoud Sharaf, 18, was shot by a settler in the East Jerusalem neighborhood of Ras al-Amoud on Friday. Sharaf, who was shot in the neck, was reportedly from the Silwan neighborhood of Jerusalem.

The Ma’an News Agency, a Palestinian outlet, reported that Sharaf was quickly buried in an effort to prevent Israeli forces from confiscating his body.

Israel frequently confiscates the bodies of Palestinians slain by its forces as a means of collective punishment with the stated intention of discouraging funerals that turn into mass protests, withholding the bodies sometimes for months.

Unconfirmed reports state that the armed man is a security guard at the Maaleh Hazeitim settlement in occupied East Jerusalem.

Israeli forces disperse Palestinian worshippers in the Ras al-Amoud neighborhood of Jerusalem after mass prayers were held in the streets in protest of Israeli measures at al-Aqsa mosque, 21 July. Oren Ziv ActiveStills

A second Palestinian youth, Muhammad Abu Ghanam, 20, was fatally wounded by Israeli police in the al-Tur neighborhood of East Jerusalem later that day.

Video shows Palestinians smuggling Abu Ghanam’s body out of al-Makassed hospital, where he succumbed to his injuries, before his remains could be confiscated by Israeli forces:

Israeli forces had raided the hospital “looking to detain Palestinians who were injured during the clashes,” according to the Ma’an News Agency.

Ma’an reported that Abu Ghanam was a student at Birzeit University.

A third Palestinian youth, Muhammad Mahmoud Khalaf, 17, was shot in the chest and killed by Israeli forces in the village of Abu Dis near Jerusalem on Friday.

Khalaf was buried in Abu Dis. 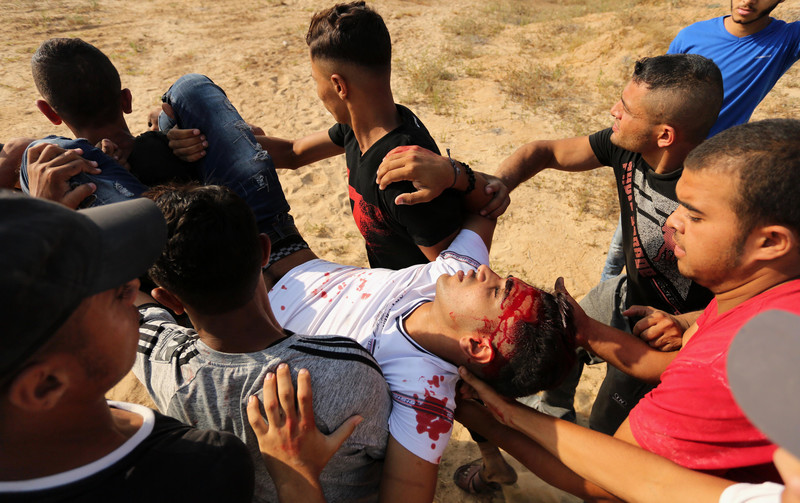 The Democratic Front for the Liberation of Palestine, a leftist faction, stated that Khalaf was affiliated with the group and had recently passed his secondary school matriculation exams. 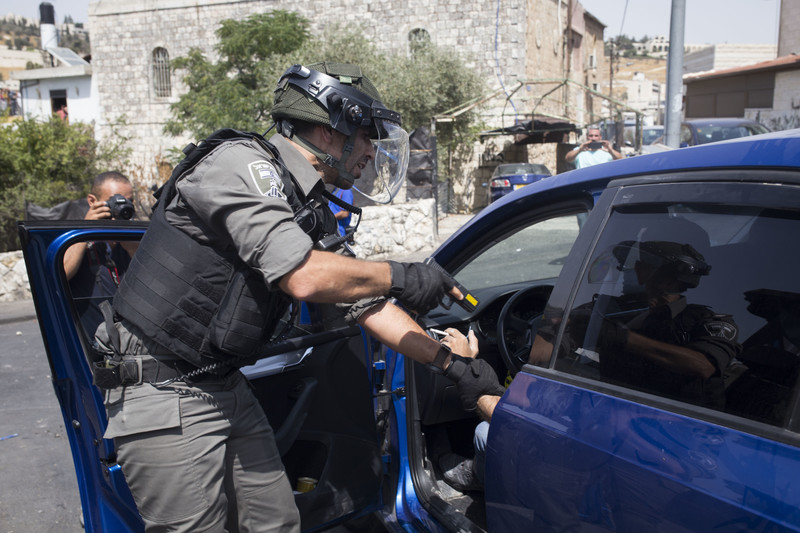 Three Israelis were killed and one more critically injured in a stabbing attack in the Halamish settlement near the West Bank city of Ramallah late Friday night.

The suspected Palestinian assailant from the nearby village of al-Kobar was reportedly shot but not killed. Israeli media identified him as Omar al-Abed, 19. Al-Abed published a manifesto on social media stating that he was motivated by the developments at al-Aqsa mosque. 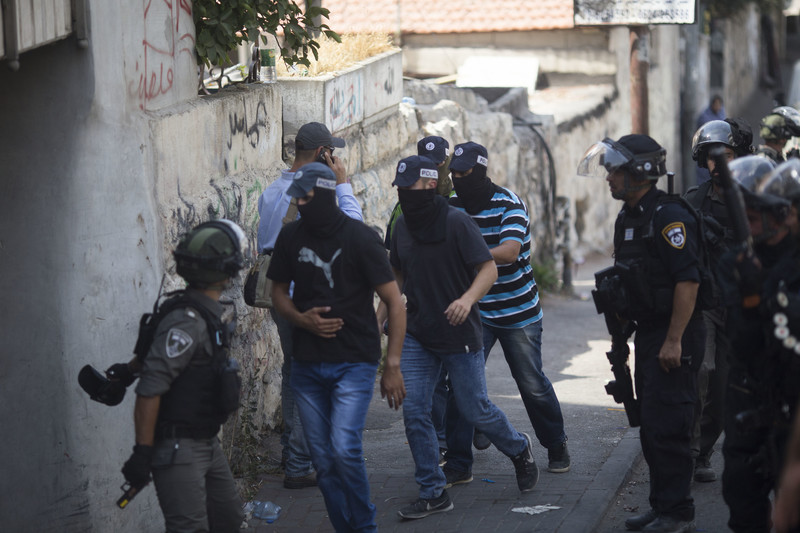 The Palestine Red Crescent society told media that approximately 400 Palestinians were injured by Israeli forces across the West Bank, including East Jerusalem, on Friday. The majority were injured by tear gas inhalation, while around 100 were wounded by live fire and rubber-coated steel bullets.

At least six protesters were wounded by live fire and another four injured by rubber-coated steel bullets in Hebron, according to the Red Crescent.

A video from Hebron appears to show a protester being shot in the back as he was running away from Israeli forces:

Tnouh is the third resident of the village to be killed by Israeli forces so far this year.

Muhammad Ibrahim Jibril, 24, was shot dead earlier this month during what Israel claims was a vehicular attack against soldiers.

In January, soldiers in Tuqu were shown on video dragging a gravely injured Qusay al-Amour, 17, across the ground for several meters, his head repeatedly hitting the ground. Al-Amour died of his injuries.

On Wednesday, soldiers shot and killed Rafaat Nathmi Shukri Hirbawi, 29, at the Beit Einoun junction near the West Bank city of Hebron. The army claimed that Hirbawi was attempting to carry out a car-ramming attack when he was killed.

Two soldiers were lightly wounded in the incident, an army spokesperson said.

A Palestinian man was killed during a raid near the West Bank city of Ramallah on Sunday. Israeli police claimed that the slain man, Ammar Ahmad Khalil, 34, was suspected to have shot at Israeli vehicles the previous day.

A police spokesperson told media that Khalil pointed a gun at Israeli forces during the raid, prompting them to shoot him. No Israeli soldiers were injured during the incident.

Forty-nine Palestinians have been killed by Israeli forces and armed civilians so far this year, 13 during the month of July alone. Thirteen Israelis and a British national were killed by Palestinians in 2017.

A rocket was launched from the northern Gaza Strip early Sunday morning, according to the Israeli Defense Force (IDF).

The weapon “exploded mid-air,” according to the IDF announcement posted on Twitter.

A short while ago, a rocket was launched from the northern Gaza Strip. The rocket exploded mid-air. No injuries have been reported.
3:14 PM - 23 Jul 2017
No one was injured in the alleged attack, the Israeli military said, without immediately providing any further details.

The alleged projectile was reportedly headed to the Ahskelon coastal region in southern Israel, the Times of Israel reported.

No rocket alert signal was activated as the explosion happened “relatively early” in its flight, Israeli media reported citing officials.


The incident comes amid escalating tensions in the region, with Israel beefing up its military presence in the West Bank.

Israeli police have used force to disperse Palestinian worshippers near the Lion’s Gate in Jerusalem. RT Arabic correspondent Dalia Nammari was caught up in the violence.

In a video shot by RT Arabic, crowds of worshippers can be seen trying to flee, as clouds of smoke fill the air and Israeli police move in.

Nammari says she received a blow to her back from an Israeli soldier.


Saturday’s protest started as hundreds of Palestinians held their evening prayers outside the al-Aqsa Mosque, refusing to be subjected to the new Israeli security measures there.