If you prefer authority over evidence Mann's the man

Here is the latest from Guy McPherson, responding to a public attack on him

"A liar and a coward". I would say yes, based on my own interactions with a scientist locally who says much the same things as Mann does.

This retired professor stated his misgivings privately to friends of mine saying he did not think he could live in a world without glaciers (he's a glaciologist). That didn't stop him from coming out of of retirement to express the same things Michael Mann does - as aways from an authoritative position without citing a single item to support what he had to say.

If I can clear my head sufficiently I will have more to say
about this. 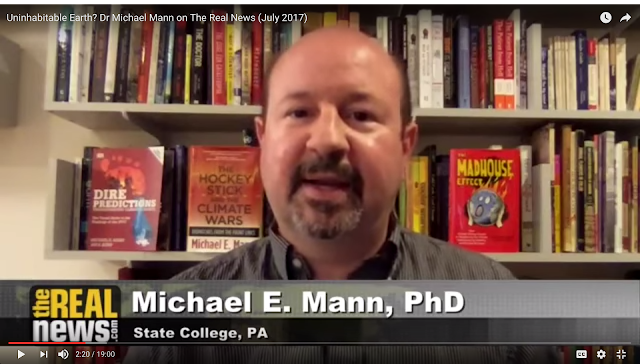 Michael Mann on the Real News conspicuouslu advertising himself.

"I’m not upset that you lied to me, I’m upset that from now on I can’t believe you"
~ Friedrich Nietzsche
Nature Bats Last,
25 July, 2017

Michael E. Mann is distinguished professor of atmospheric science at Pennsylvania State University and director of the Penn State Earth System Science Center. I believe he’s also a liar, a claim for which I provide evidence in this essay. I suspect he’s a coward, too. If you prefer authority over evidence, this is not the essay for you. And Mann’s your man.

An episode of NBL radio focused on Mann’s work. As with all such shows, the subject was invited to participate. As with all such subjects, Mann failed to call in. December 2015 was a long time ago, and Mann has since written and said false things about me. Ergo the current critique.

Professor Mann knows what I know about abrupt climate change. He has participated in email exchanges involving Mann, Thom Hartmann, and me. I’ll not share the messages due to my sense of ethics and professional courtesy, the likes of which I rarely observe from others. And here’s a hint: Mann began borrowing from my work, without attribution, after the messages in question pointed to this blog. For example, he began speaking about global dimming after these email exchanges.

Mann continues to promulgate the 2 C myth, and I know he knows better. Two degrees Celsius above the 1750 baseline is a political target dreamed into existence by neoclassical economist William Nordhaus. Mann ignores the United Nations upper limit of 1 C above the 1750 baseline, as well as the 0.5 C target-in-the-rearview-mirror acknowledged by climate writer and speaker David Spratt in October 2014 (links to all cited works are included here). In addition, as a leading voice for the politically motivated Intergovernmental Panel on Climate Change, Mann ignores important self-reinforcing feedback loops. He commits “errors” and omits facts.

“Some of the more egregious examples can be found among fringe characters such as ecologist Guy McPherson —- a doomist cult hero who insists that exponential climate change likely will render human beings and all other species extinct within 10 years.”

There are several errors in this one-sentence paragraph. I’ll focus upon three of the errors. Firstly, I’m hardly a fringe character. I’ve attracted the attention of most of the world’s climate scientists, the New York Times, and hundreds of other media outlets. Secondly, I’m not a doomist cult hero. Rather, and quite importantly considering the context, I’m a doomist cultsuperhero. Thirdly, Mann is lying: I’ve neither said nor written, “that exponential climate change likely will render human beings and all other species extinct within 10 years.” Not surprisingly for a man of his enormous –and seemingly unrecognized — privilege, Mann fails to distinguish between human life and all life on Earth. He repeats the libelous statement in an interview with The Real News Network.

Had I sufficient money and time, I would sue Mann and his co-authors for libel. I don’t have the imperialist deep pockets of Pennsylvania State University, much less a leading newspaper of record for the corrupt American press. As a result, the Washington Post and its writers are off the hook, as is often the case. I contacted the ACLU and other groups to request pro bono support. Alas, there’s little interest and no money in extinction.

I’ll finish this essay the same way I complete my public presentations: with unexpectedly good news for the audience. I am scheduled to appear with Professor Mann on a panel at the Geological Society of America’s 2017 annual meeting on 24 October of this year. That’s not the good news. This is: I don’t believe I will have the opportunity to document Mann’s lies before his colleagues. Instead, I strongly suspect either I’ll be dead as a result of abrupt climate change or Mann will demonstrate his cowardice by failing to show up for the panel.

I’ll doubtless be among the very few participants at this meeting paying my own way. Taxpayers will be paying Mann to attend. If you’d like to help me make the trip, donations are welcome.


Unlike Michael Mann who uses his own authority but not evidence Guy McPherson cites the scientific evidence for just about every statement.