The French Rivera: photos of an Apocalypse People sleep on the beach as fires rage over Bormes-Les-Mimosas on Tuesday.ABACA/PA Images


Southern areas of France have been ravaged by wildfire over the past few days, as several enormous areas of countryside caught fire at once.

Tens of thousands of acres caught fire during the course of this week, as firefighters wage a running battle to keep the blazes under control.

The worst of the burning has been along France's Mediterranean coast, around the chic tourist resort of Saint-Tropez, and on the island of Corsica.

On Wednesday morning, French officials confirmed that 10,000 people had been evacuated in the Provence-Alpes-Côte d'Azur region of the country.


These dramatic news photographs show how the fires burned through the night, leaving little more than scorched earth behind:

Fires have scorched tens of thousands of acres of France since Monday. 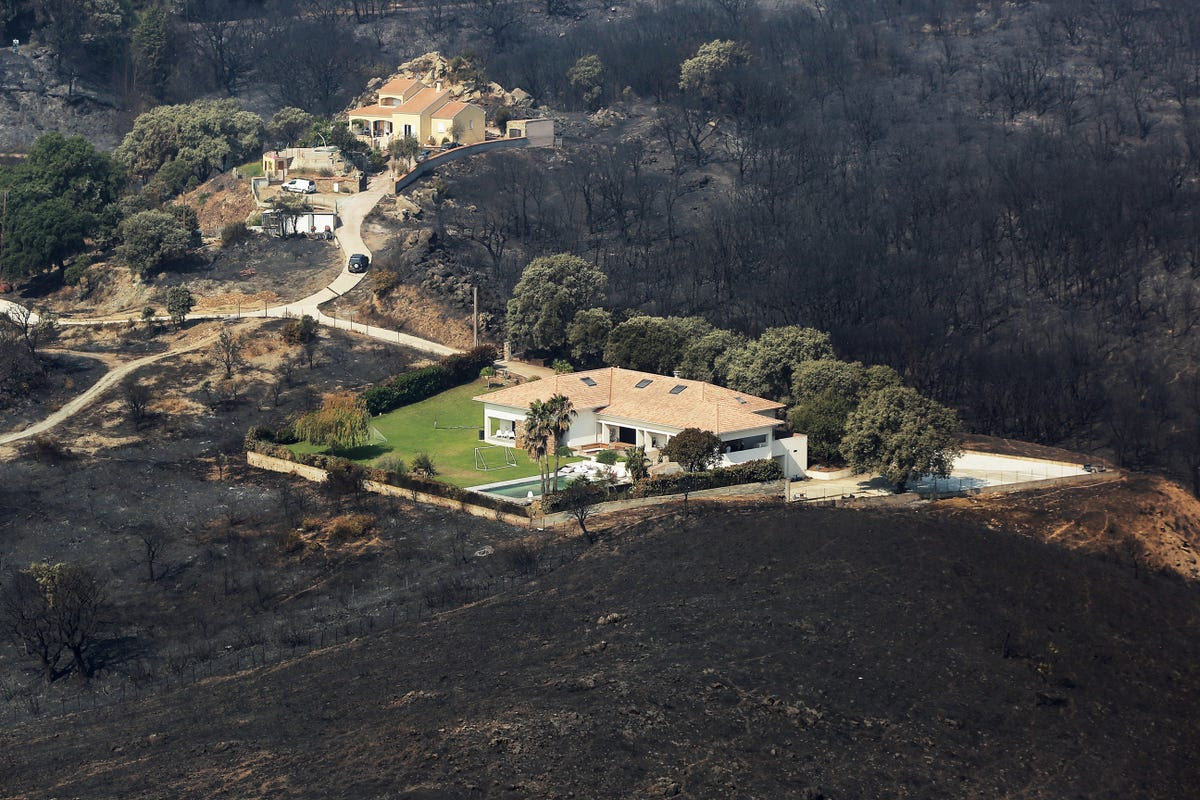 Raphael Poletti/AP
This home in Biguglia, Corsica, was completely surrounded by fire and is now an isolated spot of colour in an otherwise blackened area. Many fires are still burning.

Firefighters have managed to defend populated areas, but lost huge swathes of countryside. 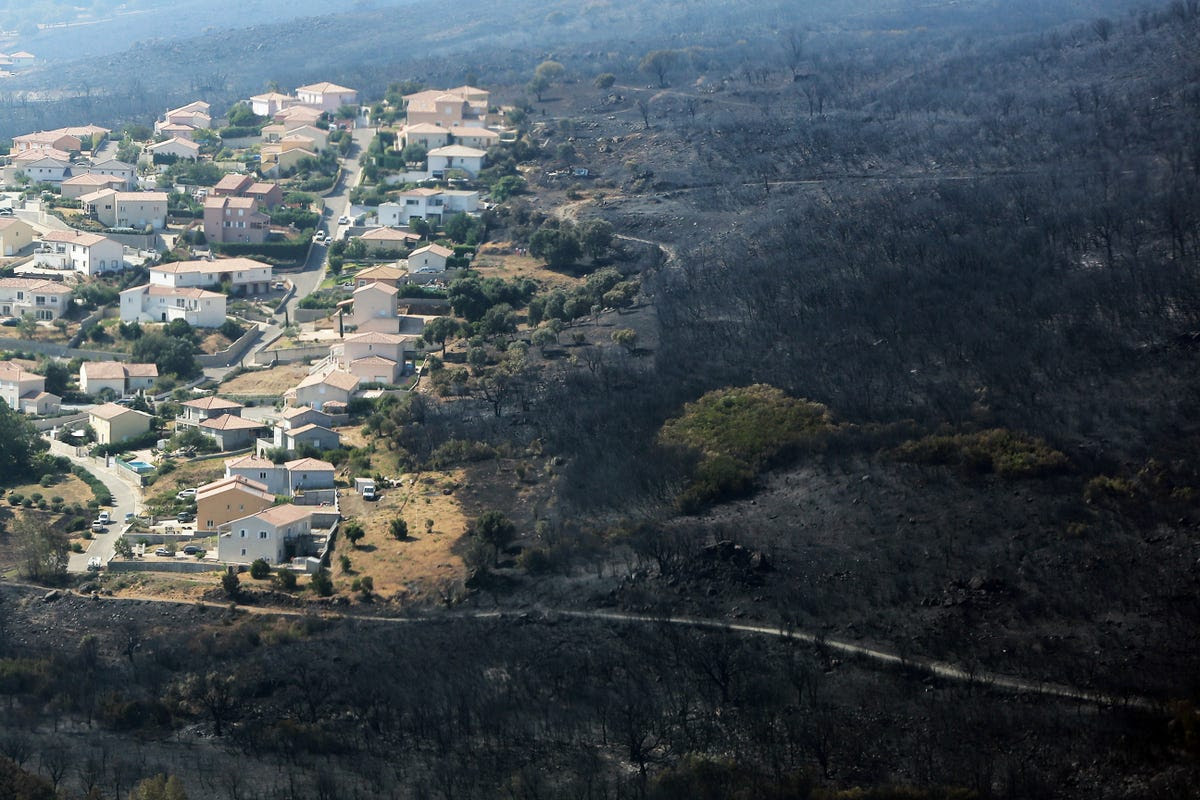 Raphael Poletti/AP
A second view of Biguglia shows how the flames came within a few metres of people's homes.

This map shows where the fires were still active on Wednesday morning. 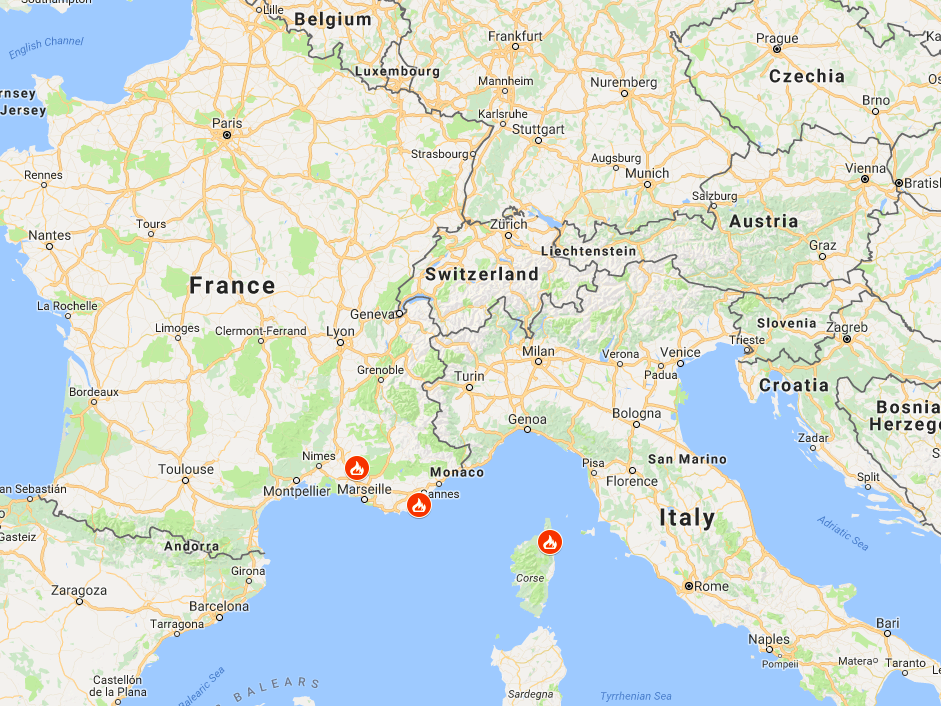 They first broke out on Monday, and quickly approached populated areas. 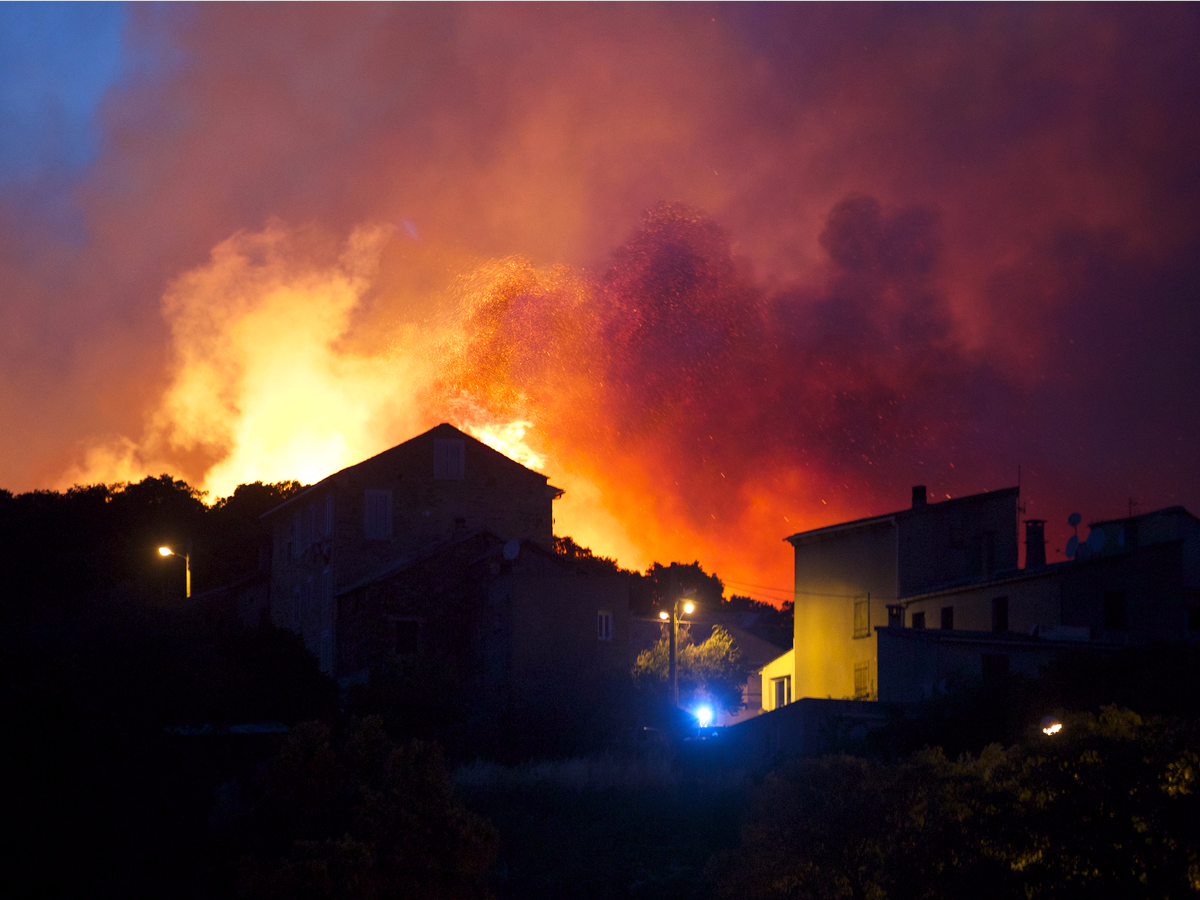 Raphael Poletti/AP
This photograph shows the village of Ortale, Corsica, against a backdrop of flames in the nearby hills.

Emergency services did their best to keep the flames away. 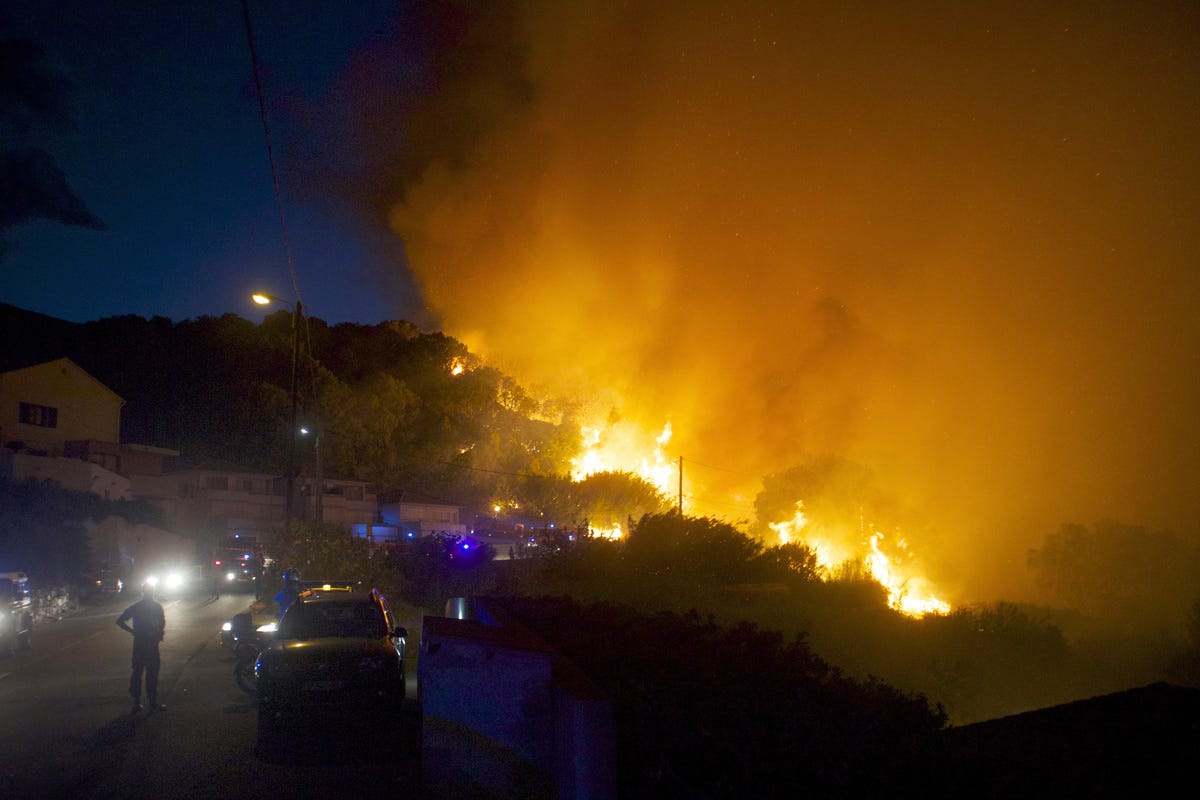 Some took matters into their own hands — this man doused his roof with water to make it more flame-resistant. 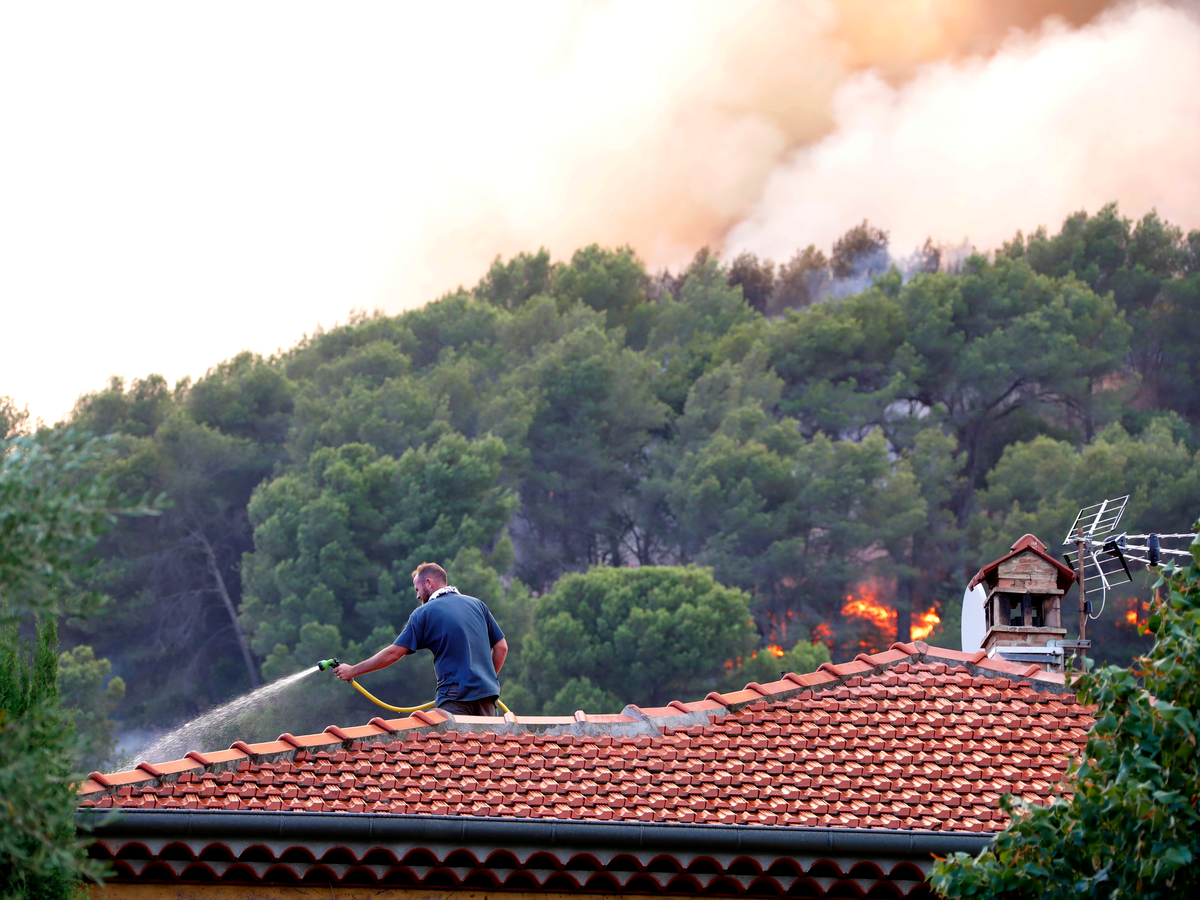 Some people slept on the beach as the fires advanced towards towns. 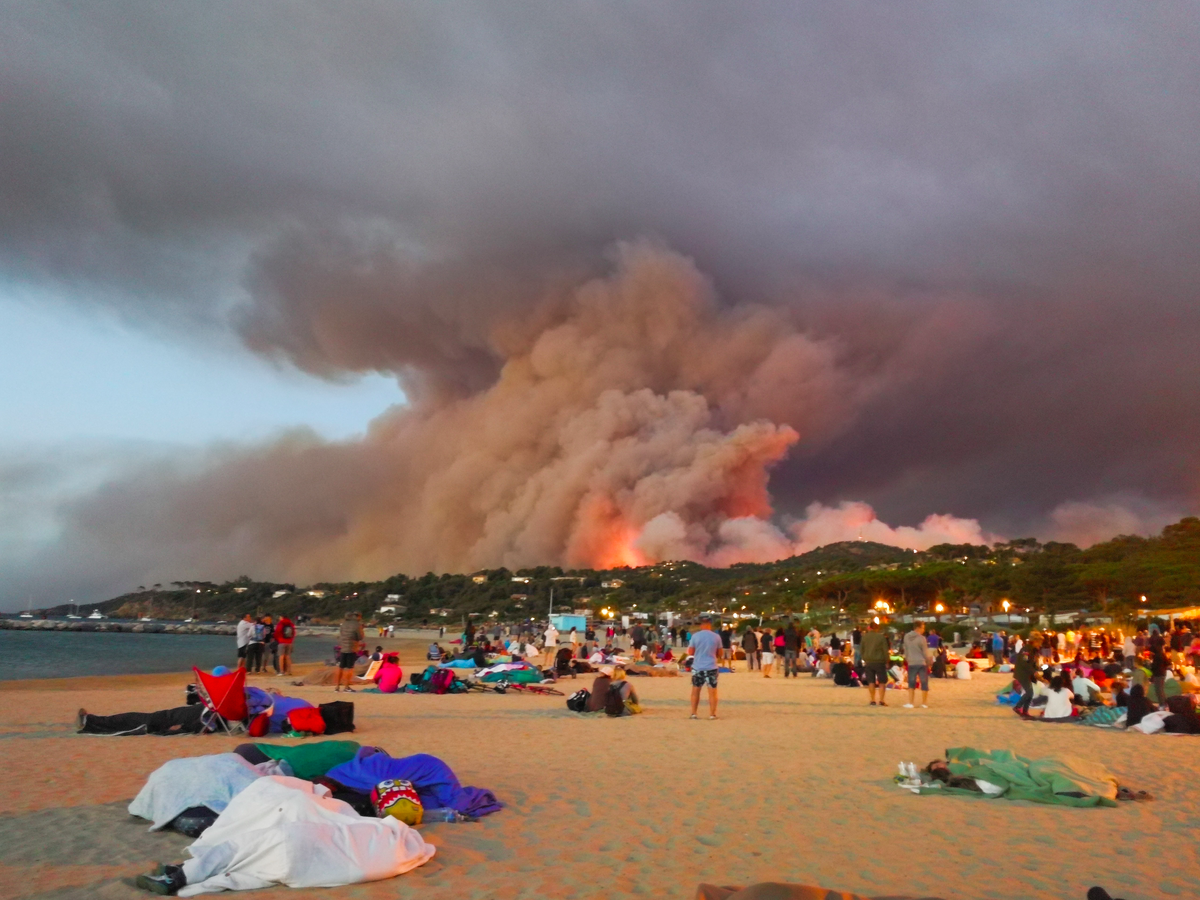 ABACA/PA Images
This shows the blaze near Bormes-Les-Mimosas.

But the devastation caused by the fire was extensive. 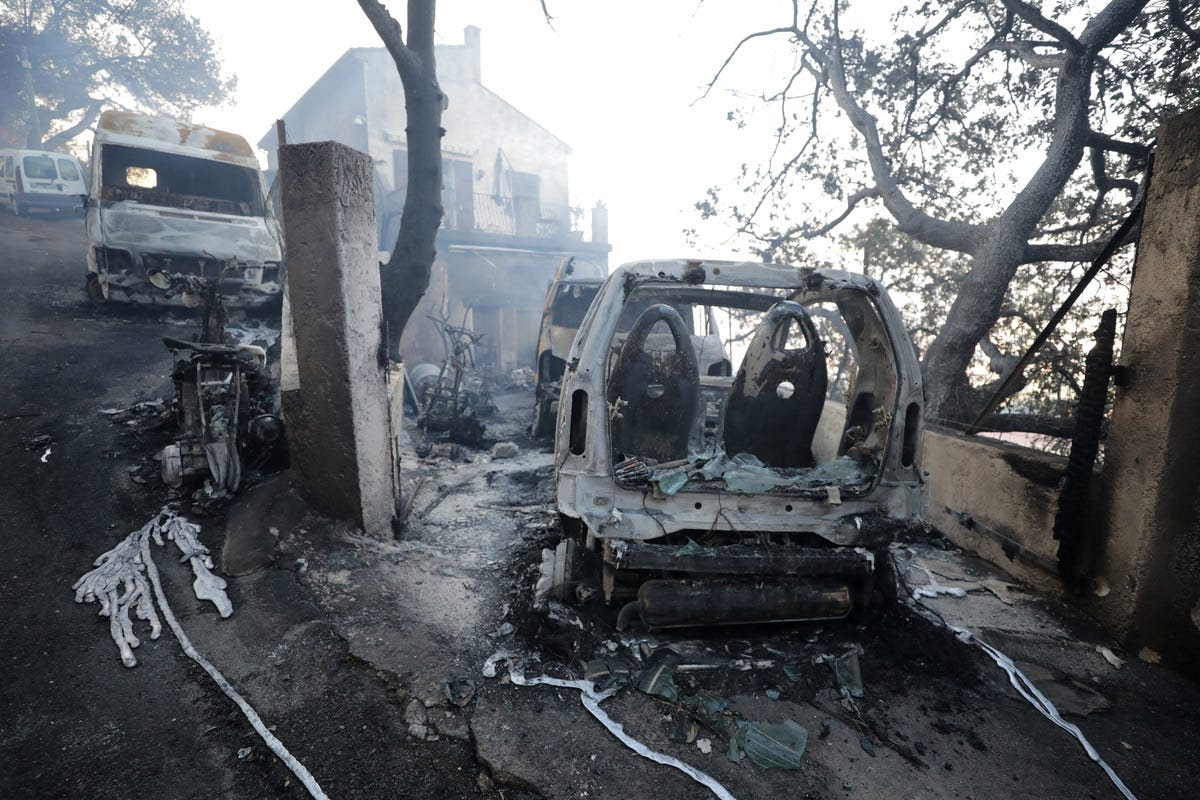 Eric Gaillard/Reuters
These vehicles couldn't be moved in time, and were found as burned-out shells near the town of Carros.

Here's a row of burned-out vehicles and caravans in La Londe-les-Maures. 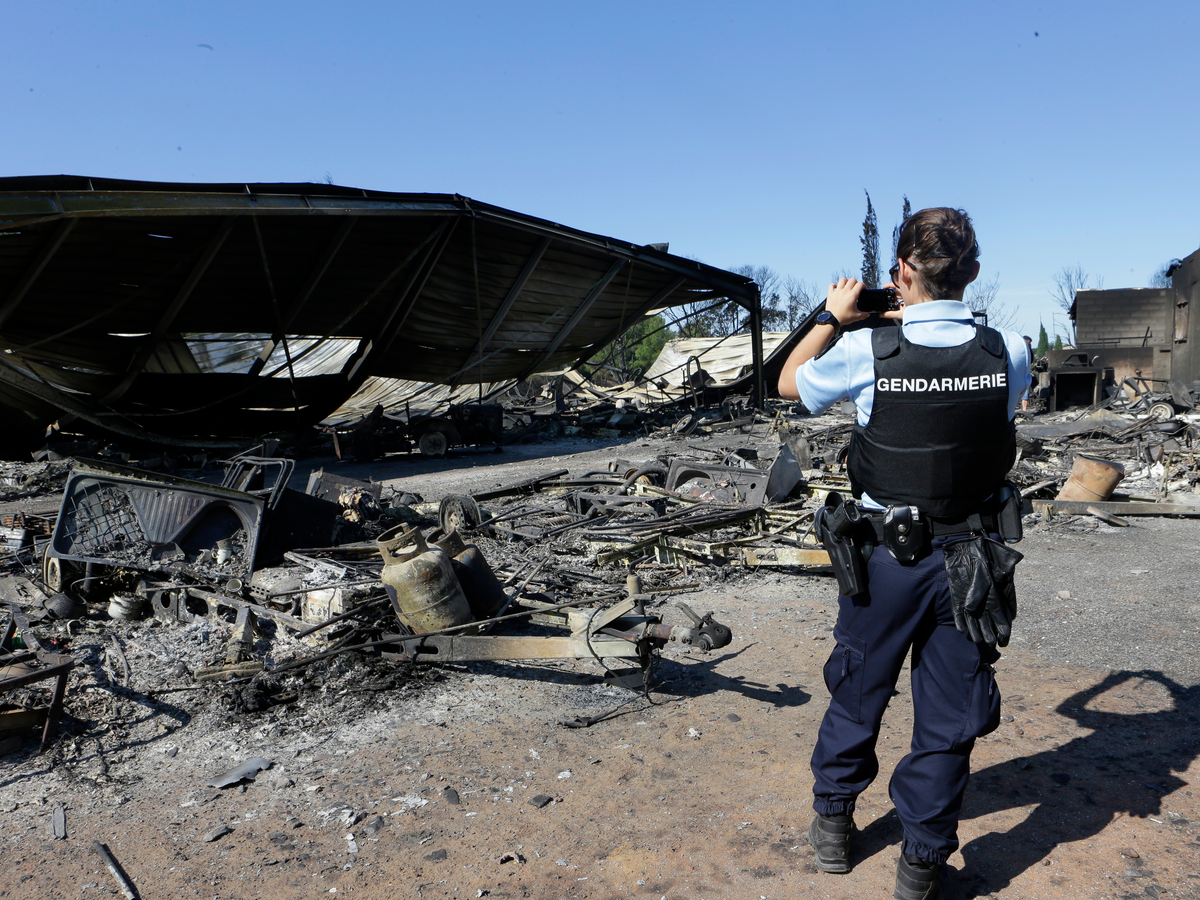 They left behind a scorched and eerie landscape. Roads were blocked as the flames came close to where people were driving. 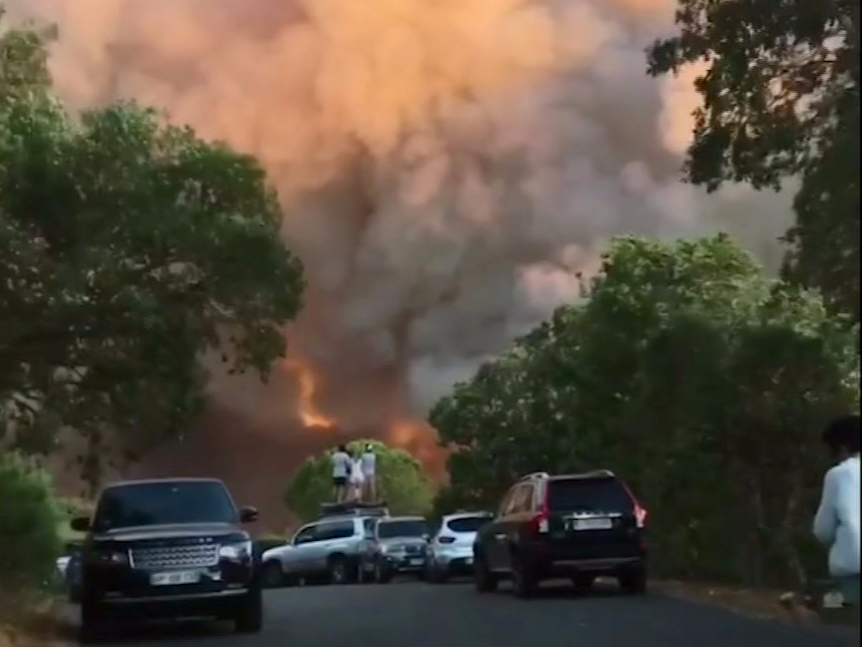 AP
This road near La Croix-Valmer was temporarily impassable. Raphael Poletti/AP
Here, a Canadair "water bomber" plane drops its load on the hills around Ortale.

The anti-fire planes are often the best weapon against the spreading wildfires. Eric Gaillard/Reuters
France asked other EU countries to lend them more planes as the fires spread, prompting Italy to give them use of two more water bombers. Similar aircraft are seen at work here above Carros.

Helicopters were also sent out to help. 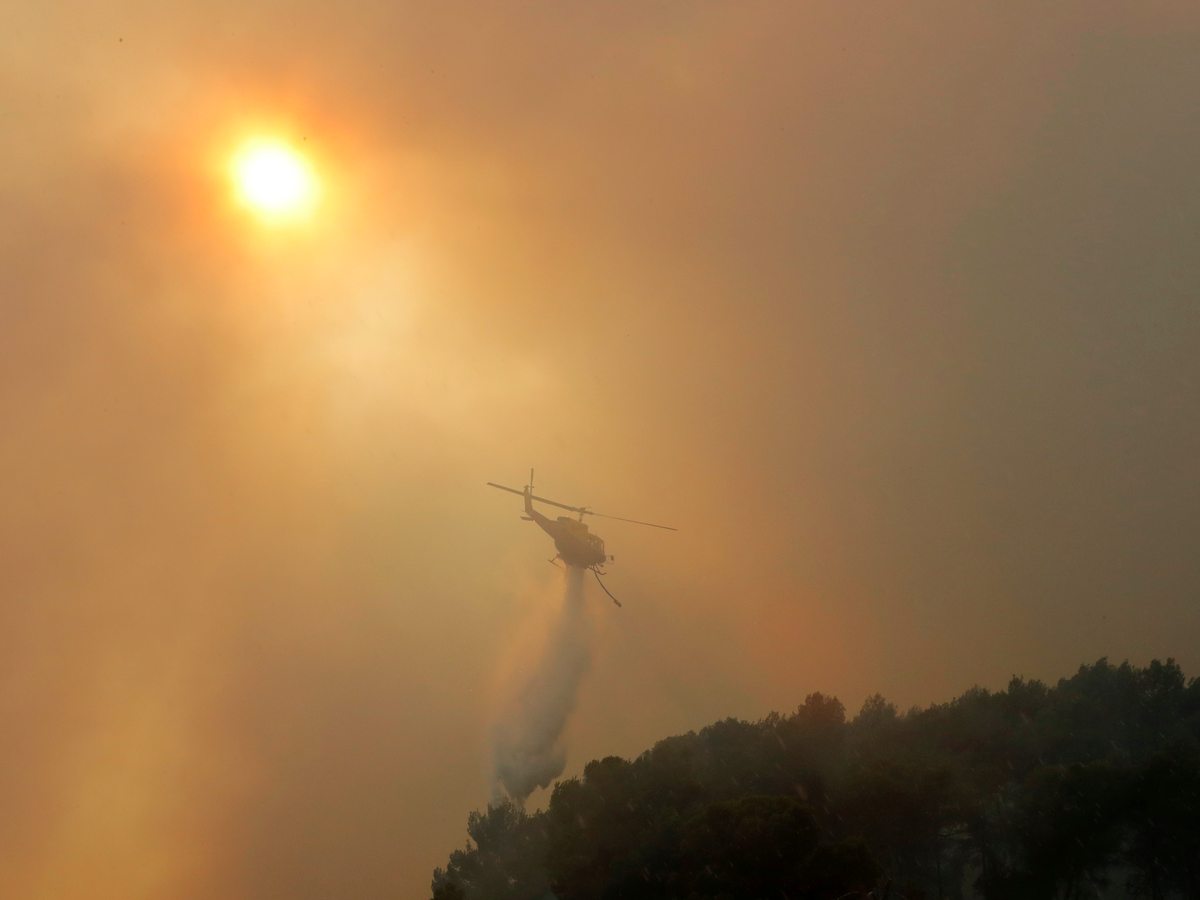 Eric Gaillard/Reuters
This one was also dealing with the blaze near Carros.

Plenty of firefighters were using hoses on the ground, as well. 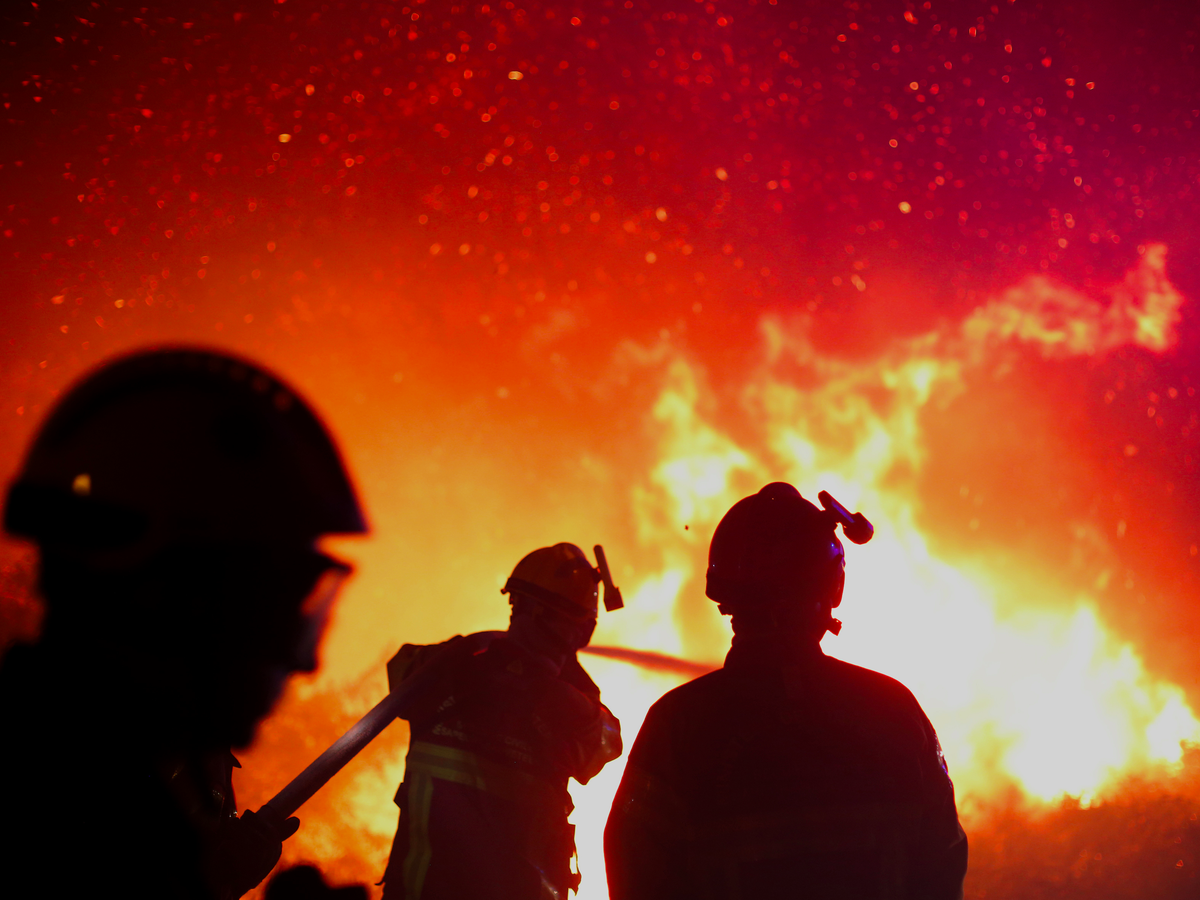 Raphael Poletti/AP
These three are trying to douse a wall of flames near Biguglia, Corsica.

Everyone worked flat-out to stop the burning — and at least 7 firefighters were injured doing their job. The fires came right up against the Mediterranean sea, which is usually a playground for summer tourists.

Claude Paris/APTraditional scenes of Riviera luxury were overshadowed by the dramatic scenes.
Robert Harris‏ @Robert___Harris
Brave pompiers of Bormes-les-Mimosas worked all night to save hundreds of homes. 10,000 people evacuated 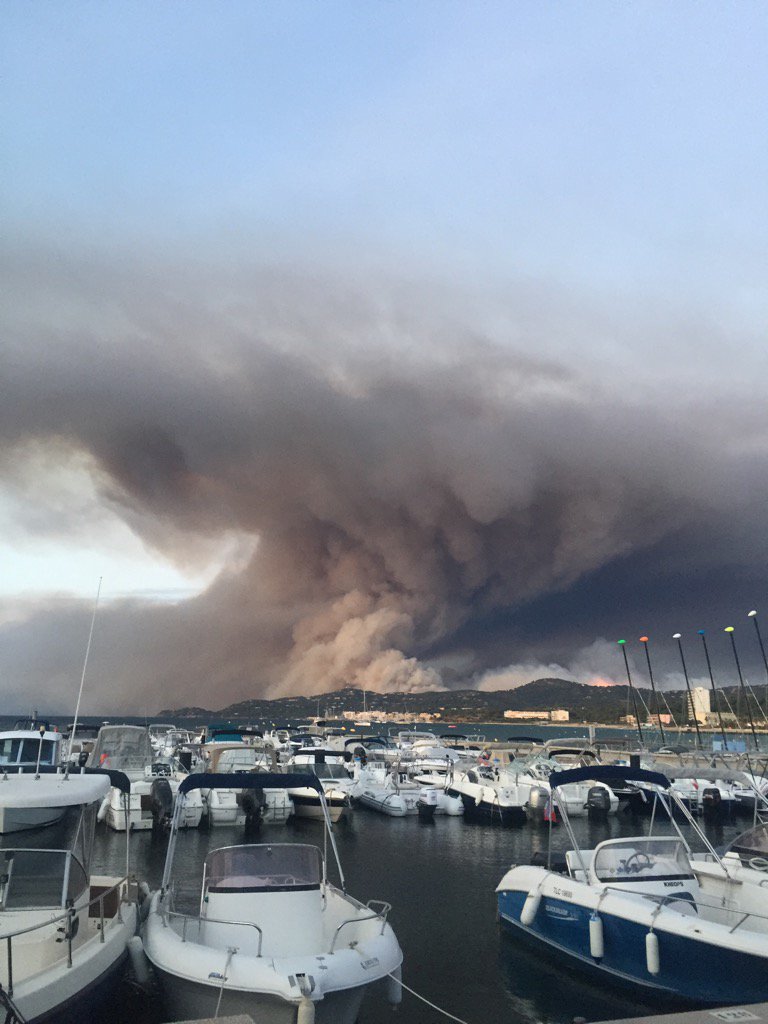 4:23 PM - 26 Jul 2017
The fires also spread inland — and are seen here over the town of Selilons.
Jean-Paul Pelissier/Reuters However, some people were determined to make the most of the hot weather, fire or no fire
AFP news agency‏Verified account @AFP
People enjoy the beach as they look at a forest fire in La Croix-Valmer, near Saint-Tropez, France 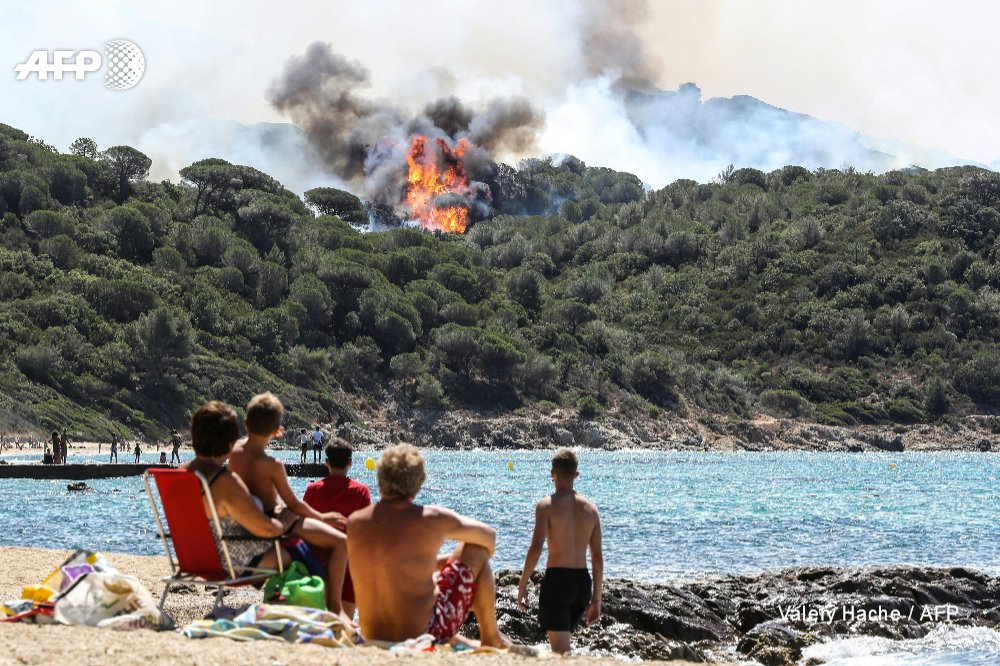