I would like to ask what the right-wing Chief Justice of the USA, John Roberts is doing teaching at a university in Wellington.


There has been a constant influx of American bigwigs recently. What have we done to deserve the attention? 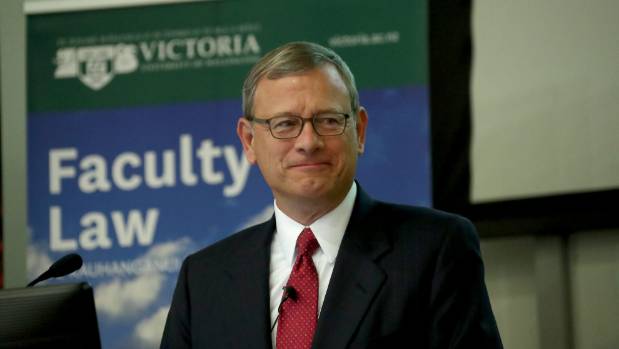 America's top judge, Chief Justice John Roberts​, has been teaching a course in Wellington but who would have recognised him?

His name appears on the lists of the "most powerful" in the world, not in the top dozen, for sure, but in the top few dozen.

He's not perturbed that one survey suggests that just 12 per cent of Americans could name him as Supreme Court Chief Justice, a role he's held since 2005.

"We're not politicians. It's not a great disappointment to us that people don't recognise us."

"I've seen some of these rankings and Judge Judy always finishes first," he said in a nod to a long time television show.

Roberts, 62, told an audience in Wellington on Wednesday that as a recent graduate he was a clerk for the unassuming Supreme Court Associate Justice William Rehnquist, later Chief Justice.

That judge liked to walk around the grounds of the court talking over cases with his clerk. On those walks they were often stopped by visitors wanting their photograph taken in front of the Supreme Court.

"Dozens and dozens of people had pictures of themselves in front of the Supreme Court around the country with no idea it was taken by a Chief Justice of the United States."

In an hour-long discussion with the Victoria University dean of law, Professor Mark Hickford, the Chief Justice did not speak about the current political turmoil in United States politics, and he did not take questions from media. The Republican-nominated judge did say though that the selection process for United States judges, though a good one, had become overly politicised.

"You are not electing a representative so you're not entitled to know what their views on political issues are."

They had an impact on political life but they're supposed to do that as judges, only as necessary to decide the cases, he said.

Roberts was in New Zealand to teach a course at the university, with Harvard University Law Professor Richard Lazarus, on the Supreme Court in historical perspective.

The $2000 a head course, with nine hours teaching time, was spread over four days.