A cross-section of what is happening in the Arctic.

My guess (as an untrained but interested eye) is that all that stands between us and a (near) Blue Ocean Event is the weather.

And that doesn’t look too flash at the moment.

Arctic sea ice: "It looks very ugly what is unfolding"

The Typhoon autogun in the Pacific and the effects on the Beaufort gyre dynamics have been giving me a very sick feeling in my gut the last 24hrs. It looks very ugly indeed what is unfolding.

Total Precipital Water and surface winds,
Winds at 1000hpa,
Temps and winds at 850hpa,
3hr precipitations of 6mm over the the outer CAA and 850hpa winds,
and total cloud water simular to the record flood last week in Japan nth of Barrow with 700hpa winds.

This Junks looking to continue for some time with south and west winds from Norway to Chukchi to Greenland coastal. If not dumping lots of water vapour into the basin, its making hot foehn winds off Europe, Siberia, Alaska, the CAA, and Greenland. And pushing warm Pacific and Atlantic waters in at accelerated rates.

As for the effects on the Beaufort Gyre and Ice.

The Eastward surface drift from all these Westerly's, is and will continue to disperse the loose fringes and fresh meltwater to the right, de-consolidating the pack and exposing the meltwater and river Fluxs to rising salinity by mixing with the inbound waters they are riding over above the shallow continental shelves. Bottom structure and Methane venting will enhance this of course.

Along with Pacific end SST anomalies, marked where the spreading meltwater is butting up against the still eastward moving pacific waters east in the ESS and a strong and large mixing vortex in process. These are popping up all along the meltwater front and the Strong inflow through Bering has in the last few days swung from heading in that direction to straight ahead towards the pole sliding down the slope under the Chukchi front, to bending to the east and heading for the CAA along the shelf instead. 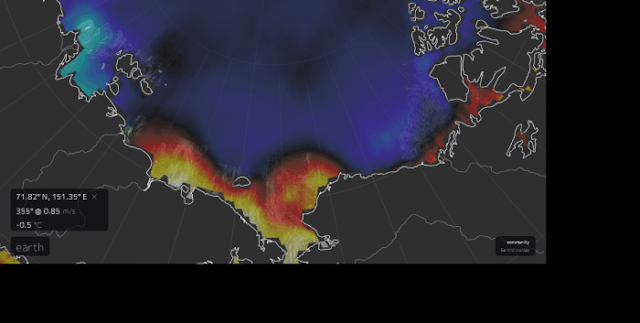 SST of 10.7C on strong inflow Thru Bering just mentioned. Mixing Vortexes even clearer. Clockwise rotating Pacific water bending northward as its sucked under anticlockwise rotating melt and debris intent on escape from the pack and heading south, you gotta expect them. 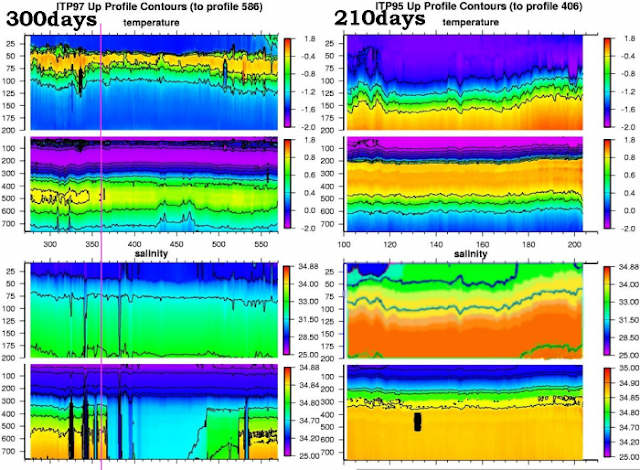 1.72m swells eastbound, against current, into the Beaufort pack and CAA. Slightly bigger ones actually heading straight north into the pack from Bering in the Chuckchi.

Track log plots of ITP buoys 97 in the Beaufort and 95 at 85nth heading for Fram. 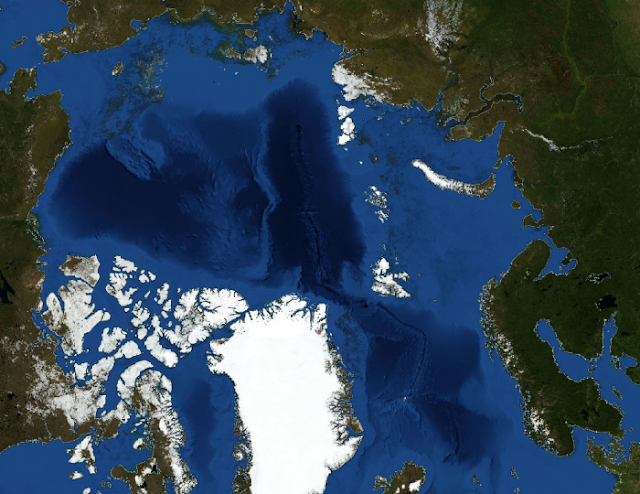 Observe the deep core of fresher water penetrating the halocline surface to depth in the lefthand ITP 97 plot. Deep mixing events on its fringes. This the Gyres "flywheel", a large reserve to maintain the Halocline, in the middle of the Canadian basin. Not much disturbance in the Temperature plots above it. A little warming and thinning of the Gulfstream Layer it penetrates from energy extracted as its feeds have punched through. About 0.5 degrees warmer and around 1% saltier than the Layer above the Atlantic from about 300m to 50m from the surface. Though recently the surface temp has spiked to just below Zero as we've noticed on the Buoys thread. ITP 97 seems to be in the fringes of the pack where the deep Gyre ramps up the Alaskan slope Right about in the middle of this

-ITP 97 right about in the middle.

Frame 6 shows the westbound current coming up here at 0C.

So anyway, the Gulfstream water that has been surfacing at 15-16C around, Svalbard and FJL, and just loves to hug the right by the Right Hand Rule of mr Coriolis North.

Should it not meet Pacific, and surface stuff head on at Severnaya Zemlya thats Westbound as traditional in a high pressure dominated Eastern Basin. Keen to take it by the hand and ride it out off the shelf into the deeper basin...

Perhaps Gulf Snake will be fresh and warm enough to climb on top, or even socialise a little with Pacific eel. Assisted by big late snow-melts and an open Russian coast, and a slide beneath a few thousand km of fresh melt pool south of Norway.

With a largely Low pressure dominated east with a reversing Gyre, and Cooler inbound stuff from a full or partial anticlockwise deep salty racetrack that it can team up with and python coil the heart of the Ocean.

Then instead of a big reserve of low density fresh pycnocline pushed down in the middle of the eastern Basin.....

That which is there will all be flinging itself out through the CAA and down both coasts of Greenland , as the Turbo Pump from both Oceans swirls all around squeezing it out from below.

I'm deeply worried that this is starting already 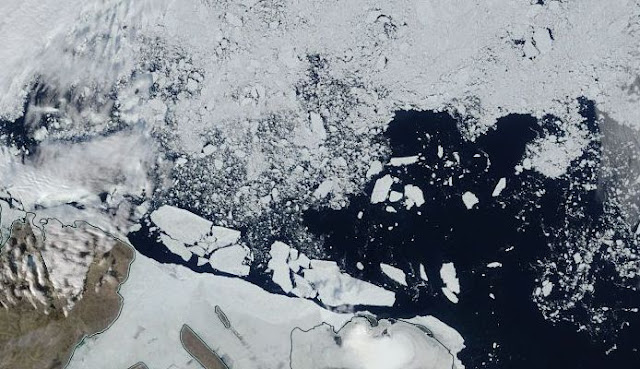 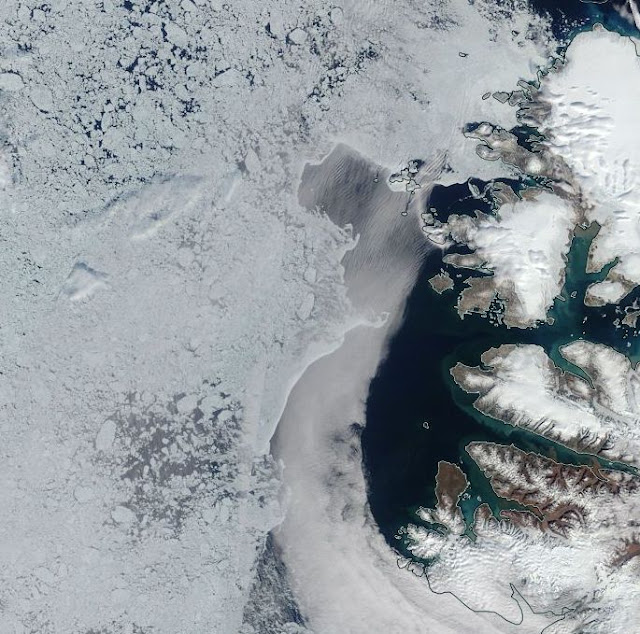 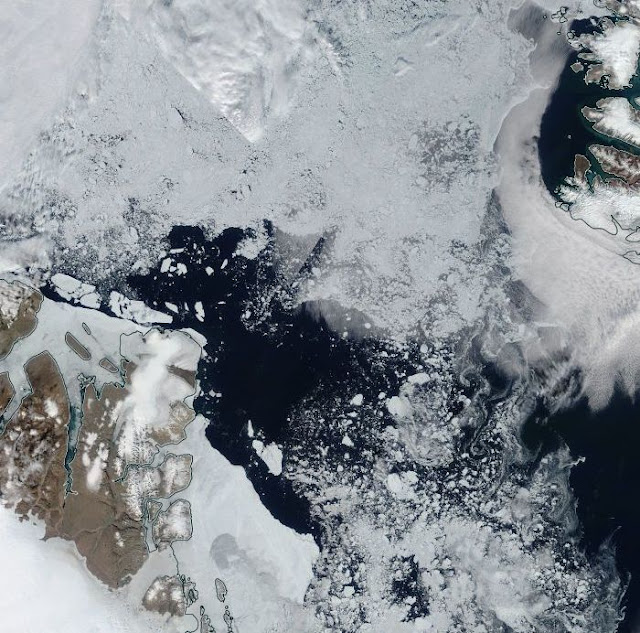 Images of a warm Atlantic water current which is pushing beneath sea ice in the Fram Strait. A large landfast piece of sea ice will shortly detach. Further fractures appeared in the land fast ice. A removal of yet another slow-down feature slowing southward sea ice transport from the Arctic.