US military poisoned water of an entire town in Washington state 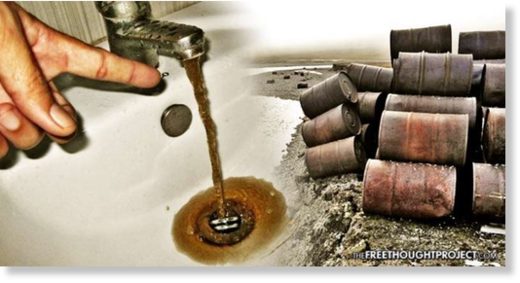 Sott.net,
19 July, 2017
An entire town in Washington state is feeling the wrath of the world's largest polluter — the US military — now their water is dangerously toxic.

Toxic chemicals have permeated the water supply of Washington's Whidbey Island, contaminating schools, homes, businesses, and a hospital, for years, but — even at levels considered 400 percent over what the EPA considers acceptable — the U.S. Navy hasn't taken full responsibility for the disastrous mess, much less done anything to ameliorate the problem.

Already coping with inadequate supplies of potable water, Whidbey Islanders have had their fill of the Navy's horrendous treatment of the environment with noxious chemicals and harrowingly loud noise. Indeed, Truthout reports — much like Flint, Michigan — many residents have no option but to use bottled water for all their needs.

"Residents are being provided bottled water by the Navy, but warned not to drink, cook or water their vegetable gardens," Citizens for Ebeys Reserve (COER) member, Cate Andrews, told Truthout. "The Navy says, 'Don't worry about showering,' but research has shown that these chemicals are transmitted through dermal absorption. Homes valued at over $1 million are unsalable, and people are trapped."

She added, "The Navy has known of private contaminated wells for years, and is only now taking action after a threat of public exposure."

COER is committed to protecting the land, water, and overall environment of Whidbey Island from what sounds like an all-out careless assault by the Navy — particularly given the nature of the chemical contaminants. Truthout notes,

"The chemicals, Perfluorohexanesulfonic acid (PFHxS) and Perfluoroheptanoic acid (PFHpA), are perfluoroalkyl substances (PFASs), also called PFCs, and come from the AFFF firefighting foam used in training exercises at the Navy's Outlying Landing Field (OLF) in Coupeville and Ault Field in Oak Harbor, the latter of which is at Naval Air Station Whidbey."

But the contaminants haven't simply inundated a couple wells or remained confined to a limited area, as Rick Abraham — who has focused on toxic pollution as an advocate in the public interest for three decades — ominously explained,

"They were found in the aquifer beneath the OLF airstrip in October of 2016 and are known to have migrated off-site to contaminate public and private drinking water."

One contaminated well in Coupeville next to the OLF — incidentally left open and unprotected — still services hundreds of homes, businesses, schools, and even Whidbey General Hospital.

Abraham, who has investigated PFAS contamination in multiple states, says many families near OLF were forced into using bottled water for all their needs beginning late last year — for cooking, drinking, teeth-brushing, and even watering food gardens — rebuffing the Navy's egregiously lax attitude regarding the pernicious chemicals in favor of sensibility and concern for their loved ones.
Indeed, while it mawkishly claims to care about the public and, vaguely, that steps are being taken, the Navy hasn't done much to alleviate searing criticism of its consciously negligent decimation of the environment nor the untenable level of contamination of the island's already-limited potable water supply.

"It's deeply concerning," Mike Welding, with Naval Air Station Whidbey Island, told a local news outlet on December 15, 2016. "The Navy wants to do the right thing and make sure we take actions to ensure the health of people in the local community, especially when it comes from operations the Navy undertakes."

Some seven months later, the situation remains grim — and is likely to worsen.
According to Truthout, the Navy substantially bolstered its fleet of "Growler" jets — the loudest aircraft on the planet — with an increased number of test flights and exercises certain to make the noise pollution issue maddeningly untenable.
Worse, the Navy has received nearly unconscionable assistance from an unlikely source.

"Along with ongoing Navy obfuscation around the crisis," notes Truthout, "the Whidbey Island Health Department — which has described the Navy as a 'partner' — has actively worked with the Navy in shaping the health department's message about the contamination to the community. The health department also kept secret from the public a plan to test the wells in the community — at the Navy's request — and who also did not allow citizens to provide input for what was tested and at what levels."

Astonishingly, contamination with firefighting chemicals represents just one facet of the region's ambivalence toward its pompously dismissive military neighbor, as the report continues,

"Naval plans to conduct electromagnetic warfare training on the Olympic Peninsula, as well as the fact that they had already been doing so on state highways unbeknownst to residents, and news of the Navy being permitted to kill or harass nearly 12 million whales, dolphins, porpoises, sea lions and seals across the North Pacific Ocean over a five-year period are things people in this region have grown accustomed to hearing about their naval neighbors.

"Pleas from residents about these issues (and many others they are concerned about) have for the most part been ignored, or sometimes residents have even been chided, by the Navy."

For years, people along the coastal Northwest, including Canadians, have reluctantly tolerated the Navy's endless procession of noisy aircraft and environmental irresponsibility; but the discovery the drinking water supply contained wholly unacceptable and damaging quantities of toxins — and its refusal to clean up the mess — has won new enemies.


Events, like community Open Houses, the Navy arranges to improve relations with the public make no mention of the chemicals lurking in the island's water supply — as if residents' legitimate concerns are somehow unfounded.

But one glance at the entry for PFASs in the Agency for Toxic Substances and Disease Registry clearly evinces what has Whidbey Islanders livid with the Navy, as the substances can "affect the developing fetus and child, including possible changes in growth, learning, and behavior. In addition, they may decrease fertility and interfere with the body's natural hormones, increase cholesterol, affect the immune system, and even increase cancer risk."

And that's not necessarily the worst of it, either, as unnamed 'studies' cited by Truthout show PFASs wreak havoc on children's response to immunizations, increasing risk of infection from standard inoculations, while raised blood levels of PFHxS may increase the chances for developing attention deficit hyperactivity disorder (ADHD) and can "affect the function of sex hormone receptors."


Even the questionably-named Environmental Protection Agency has a hand in the toxic contamination habits of the Navy across the country — listing acceptable levels for PFOA and PFOS at 70 parts per trillion (ppt) — a quantity many scientists and some states have taken to task as insufficient to protect anyone. Minnesota now puts the acceptable level of PFOS at 27 ppt and PFOA at 35 ppt — while Vermont issues a health advisory for PFOA at just 20 ppt, and suggests no level of PFOA acceptable for livestock drinking water.

Nevertheless, "On March 4, the Navy tested 27 monitoring wells it had previously installed at OLF Coupeville, where it found even higher levels of contamination in the aquifer in some of the wells. PFOA was found up to 1,190 ppt, PFOS up to 54.7, and PFBS up to 473 ppt. The Navy's 'plan' for testing these monitoring wells did not include testing for PFHxS or PFHpA, even though both were known to be in the water as well."

In a press release, Maryon Attwood of COER lamented,

"The testing of our water should not be a one-time event, and the analysis should identify the lowest detectable concentrations of those chemicals."

It took the Navy some time to even reluctantly admit polluting the potable supply — a problem it wants to solve just by forcing people to use countless bottles of water it now doles out — but that ignores the needs of the island's and region's diverse businesses with startling obstinance. It seems the government wants the affected citizenry to be content using individual, plastic bottles of water for literally all their needs — forever.

"Their offer of bottled water is patronizing when you consider the numbers of organic farms located on hundreds of acres on this island who sell their fruits and vegetables to some of the most well-known restaurants in Seattle," Andrews continued.


"Early on, we were told by several Navy staff that 'we' were collateral damage to the 'war on terror.' And while unbelievable at first glance, I now believe this to be true."

Similar to the lead contamination crisis in Flint for the government's sole culpability in poisoning residential and business water supplies, Whidbey Islanders just want safe water, straight answers, and a plan to prevent toxic contamination from growing even worse.

But it doesn't appear the Navy wishes to cooperate — much less, take full responsibility for wrongs already committed. But, as Attwood stated simply, adding to a furious chorus growing in intensity around the U.S.,

"We have a right to know what's in the water we drink."