Meanwhile, things are not staying the same in the Arctic 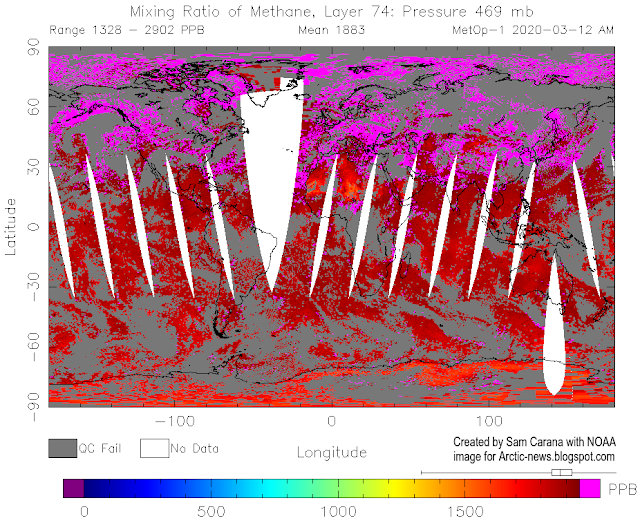 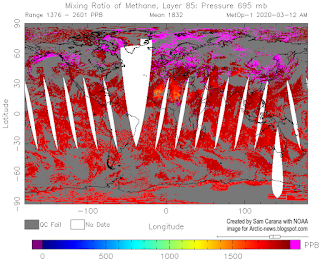 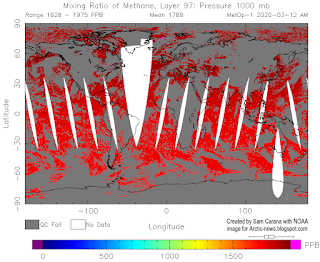 What did cause this very high peak? The image on the right shows the situation at 695 mb.High levels of methane, colored in magenta, show up over the oceans at high latitudes north, especially around Greenland and around Svalbard.The image underneath on the right shows methane even closer to sea level, at 1000 mb. At this altitude, such magenta-colored high levels of methane only show up over an area in between Greenland and Svalbard.It appears that these high methane levels did originate from this area. What could have triggered this?The image below shows that an earthquake with a magnitude of 4.6 on the Richter scale hit an area in between Greenland and Svalbard on March 11, 2020, at 21:30:03 (UTC), 2020, at depth of 10 km.

It appears that the earthquake did cause destabilization of sediments at the seafloor of the Arctic Ocean in between Greenland and Svalbard, containing methane in the form of hydrates and free gas, with the destabilization resulting in the eruption of methane that subsequently reached the atmosphere. 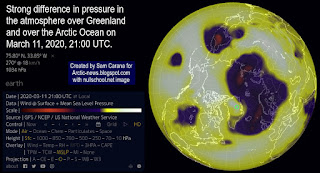 As illustrated by the image on the right, there were strong differences in pressure in the atmosphere over Greenland on the one hand and over the Arctic Ocean on the other hand, on March 11, 2020, 21:00 UTC.The next question is if there was something that triggered the earthquake. The image below shows a forecast for March 22, 2020, of conditions in the stratosphere at 10 hPa. 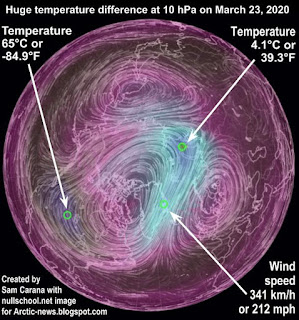 Above image shows a forecast for March 22, 2020, of temperatures as high as 6.2°C or 43.2°F and as low as -68.8°C or -91.9°F at another location at 10 hPa (Polar Vortex), with wind reaching speeds as high as 369 km/h or 229 mph.The image on the right shows a huge temperature difference between two locations in the stratosphere on March 23, 2020, resulting in wind reaching speeds as high as 341 km/h or 212 mph.This indicates a strong updraft, carrying huge amounts of relatively warm air from low altitudes over the Arctic up into the stratosphere.Earlier this year, Arctic sea ice extent was a bit larger than it was in previous years at this time of year. This was followed by a steep fall in extent, as illustrated by the image below. 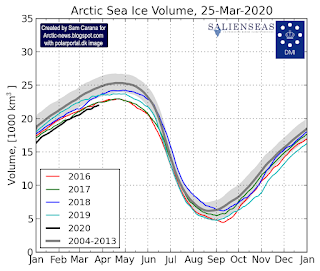 Since the start of 2020, Arctic sea ice volume has been at a record low for the time of year, as the image on the right shows.These conditions may have acted as a sink plunger, triggering the earthquake and destabilizing sediments at the seafloor, resulting in the methane eruptions. 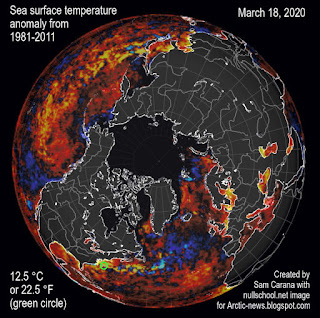 More generally, the events reflect a huge and growing overall imbalance in the temperature of the atmosphere, and the added methane releases further contribute to this imbalance.Meanwhile, sea surface temperatures off the coast of North America on March 18, 2020, were as much as 12.5°C or 22.5°F higher than 1981-2011 (at the green circle on the image on the right).With sea ice thickness this low, it looks like there will be no buffer left to consume ocean heat that gets carried along the path of the Gulf Stream into the Arctic Ocean, which threatens to further destabilize sediments containing huge amounts of methane, as also discussed in an earlier post.On top of this, high temperatures keep showing up over the Arctic Ocean in forecasts, as illustrated by the two forecasts below (for March 21, 2020, and for March 31, 2020).

Discussion
As said above, it appears that this M4.6 earthquake on March 11, 2020, caused destabilization of sediments at the seafloor of the Arctic Ocean in between Greenland and Svalbard. 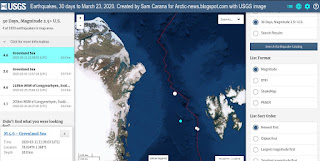 The image on the right shows that earlier, a M5 earthquake hit an area a bit to the north, i.e. on March 3, 2020.While not much methane showed up locally following that M5 earthquake, high methane readings were recorded elsewhere over large parts of the Arctic Ocean early March 2020, which could have resulted from destabilization along the fault line that crosses the Arctic Ocean (red line). 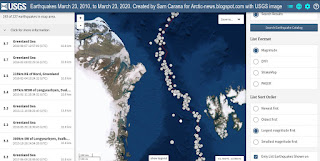 The next image on the right shows that earthquakes between Greenland and Svalbard over the past decade did predominantly occur on this fault line.The high methane readings in between Greenland and Svalbard following the M4.6 earthquake could have occurred for the very reason that this earthquake hit an area outside the fault line, where sediments had until now rarely been shaken.This could imply there could be huge amounts of methane contained in areas outside the fault line, supporting the above warning that ocean heat that gets carried along the path of the Gulf Stream into the Arctic Ocean threatens to further destabilize sediments containing huge amounts of methane. After all, such destabilization can occur as a result of higher temperatures or changes in pressure, or both.The situation is dire and calls for immediate, comprehensive and effective action, as described in the Climate Plan.Links• Arctic Ocean January 2020https://arctic-news.blogspot.com/2020/02/arctic-ocean-february-2020.html• Seismic Eventshttps://arctic-news.blogspot.com/p/seismic-events.html• Arctic Ocean February 2020https://arctic-news.blogspot.com/2020/02/arctic-ocean-february-2020.html• Climate Planhttps://arctic-news.blogspot.com/p/climateplan.html

Look at where we are with Arctic sea ice extent right now- look at the blue line on the left. 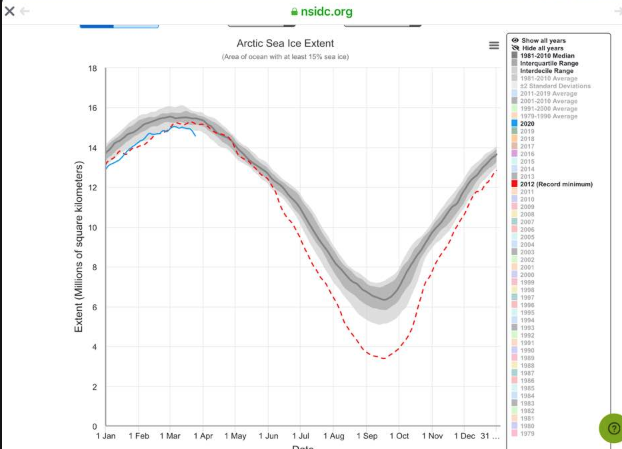 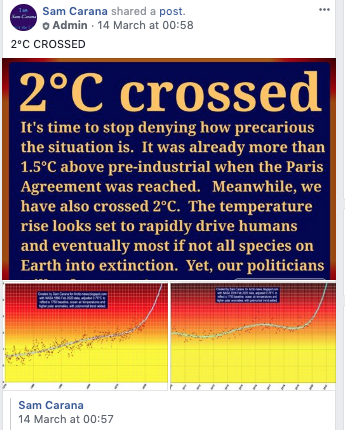 It's time to stop denying how precarious the situation is.

In Sam Carana's analysis, the year 1750 is used as the baseline for pre-industrial. The analysis shows that we meanwhile have also crossed the 2°C threshold (in February 2020) and that the temperature rise looks set to rapidly drive humans and eventually most if not all species on Earth into extinction.

Yet, our politicians refuse to act!

Indeed, there are indications that the recent rise is part of a trend that points at even higher temperatures in the near future, as also discussed at this analysis page. Polynomial trends can highlight such acceleration better than linear trends. The 1970-2030 trend is calculated over the period from 1880 through to February 2020. The trend points at 3°C getting crossed in 2026. The fact that the January 2020 and February 2020 anomalies are above this trend indicates that the situation might be even worse.

A polynomial trend calculated over a shorter period can highlight short-term variation such as associated with El Niño events and can highlight feedbacks that might otherwise be overlooked. The 2010-2022 trend is calculated with 2009-Feb.2020 data. The trend indicates that 2°C was crossed in February 2020, and looks set to keep rising and cross 3°C in 2021, more specifically in January next year, which is less than a year away.

Such a steep rise is in line with unfolding developments that are causing the aerosol masking effect to fall away, such as a decrease in industrial activity due to COVID-19 fears. Much of a potentially huge temperature rise over the next few years could eventuate as a result of a reduction in the cooling now provided by sulfates. In other words, a steep temperature rise could result from a decline in industrial activity that is caused by fears about the spread of a contagious virus. 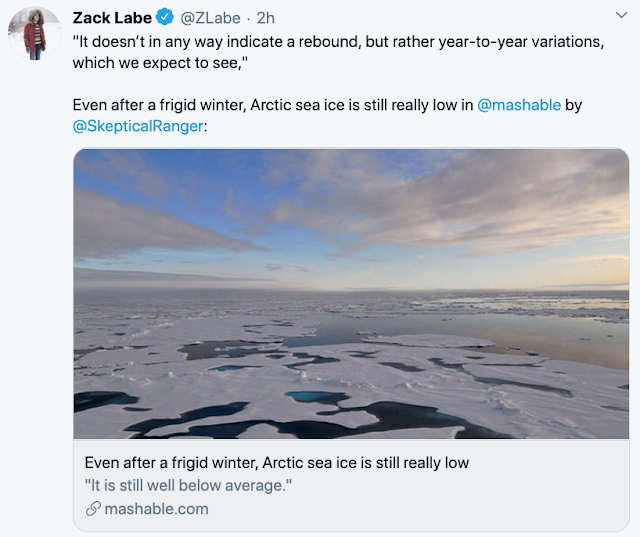 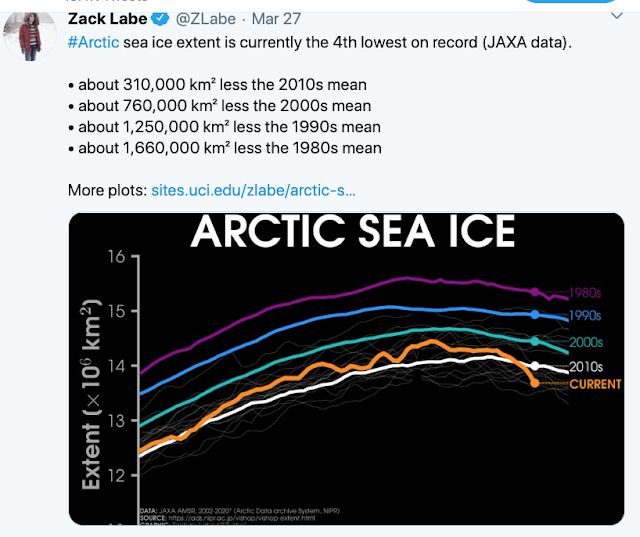 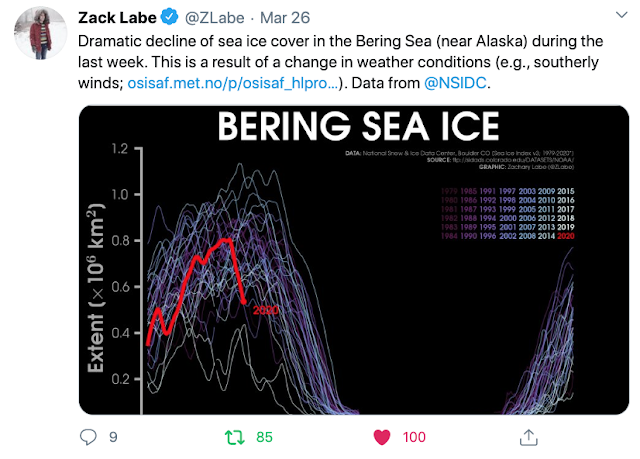