40 new cases of coronavirus in NZ: the Warehouse uses a statement of staying open to up their share price 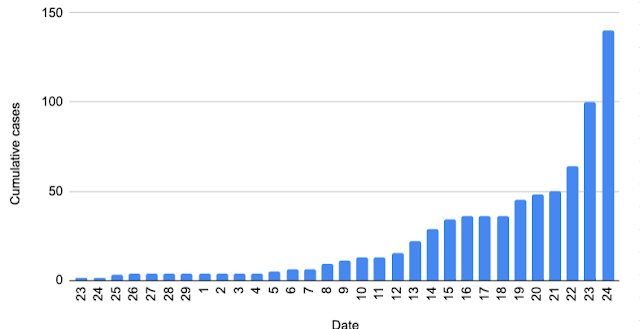 Here is an updated graph of reported cases


The number of confirmed cases of COVID-19 has risen by 40, officials announced on Tuesday.

Director-General of Health Dr Ashley Bloomfield made the announcement at 1pm.

New Zealand now has 155 cases, including 13 probable cases which would be counted as confirmed, he said.

The number of confirmed cases of COVID-19 has risen by 40, officials announced on Tuesday.

Director-General of Health Dr Ashley Bloomfield made the announcement at 1pm.

New Zealand now has 155 cases, including 13 probable cases which would be counted as confirmed, he said.

"In these [probable] cases, this is a person who has returned a negative laboratory test but the clinician looking after the person has diagnosed them as a probable case due to their exposure history and their clinical symptoms," Dr Bloomfield told media.

"These cases are actually treated as if they were a positive laboratory-confirmed case and the actions taken are the same for confirmed cases."

Twelve cases have recovered, while six people are currently in hospital in a stable condition.

A total of four cases are classified as community transmission, three in Auckland and one in Wairarapa. Contact tracing is underway for these.

Dr Bloomfield said around a third of the new cases could be linked to overseas travel or to close contacts of an already confirmed case.

More than 900 lab tests were carried out yesterday and more than 8300 tests have been completed now.

Dr Bloomfield said it was important New Zealand move to alert level 4 as soon as possible.

"There is a clear consensus among public health professionals, scientists and a wide range of health professionals that it is better to do this soon rather than later, and doing so gives New Zealand the best chance of breaking the chain of community transmission," he said.

"This will require all our efforts and I strongly urge all New Zealanders to play their part."

The following has made me see RED. 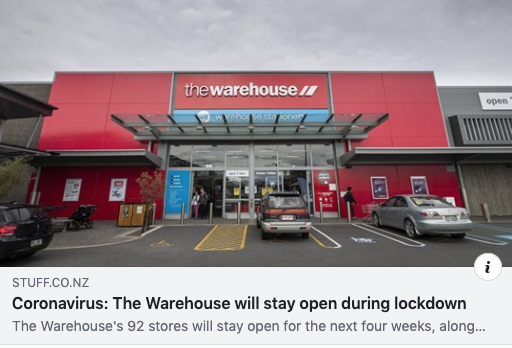 See how the government propaganda agency, RNZ describes it. 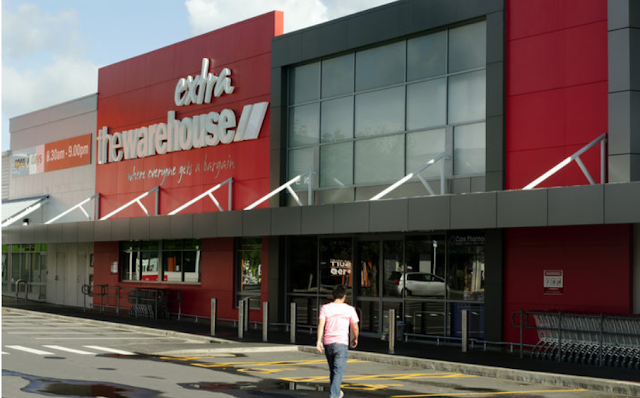 There is confusion over whether The Warehouse will keep its 92 Red Sheds open as a supplier of essential consumer goods, as other companies are shutting down.


The level four lockdown of the country begins at 11.59pm on Wednesday as the country tries to stop the spread of Covid-19 coronavirus.

The Warehouse says its 92 Red Sheds will stay open as a supplier of essential consumer goods, but its other brands - Noel Leeming, Torpedo 7 and Warehouse Stationery will be shut.

"In the past two weeks the group has seen unprecedented demand for essential items across all our brands. Goods sold included essential items to prepare themselves for the mandatory isolation period of at least four weeks," the company said in a statement to the Stock Exchange.


It said shoppers would be required to keep to social distancing rules, and there would be a limit on some purchases. However, the Warehouse's online shopping service would continue and contactless deliveries made.

But at the latest government briefing this afternoon, MBIE spokesperson Paul Stocks could not say whether The Warehouse was considered an essential business, and whether it would be permitted to open.

"We are working though those firms that will be allowed to remain open.

All dairies and small businesses have to close their doors which, despite government offers of assistance, will probably go to the wall while corporations like the Warehouse intend to stay open.

The gov't has NOT given the Warehouse authority to stay open .

The Warehouse announced this on their own behalf , and watched the share price skyrocket before the regulating authority shut down trading in Warehouse shares . Apparently they have been in financial difficulties and it looks like this was staged so that some shareholders could make a quick profit by fraudulent means before they took to the parachutes .
Posted by seemorerocks at 15:40