News from the Big Apple

And So It Begins . . . Man Drops Dead on NYC Subway - Coronavirus 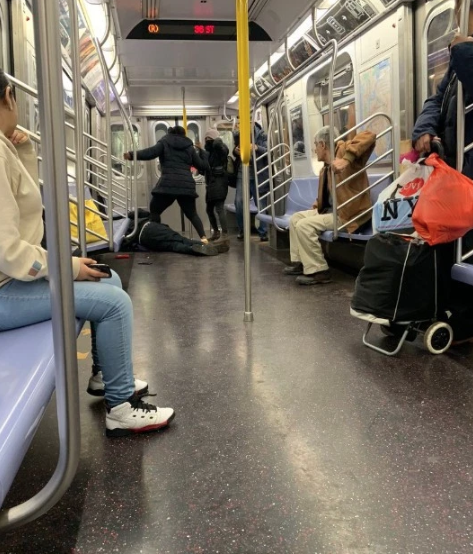 A passenger on a New York City Subway Train got up off the bench seat . . . and dropped dead. Witnesses said the man was wheezing terribly before collapsing.
NYPD Officers who responded DID NOT WEAR FILTER MASKS! ! ! !
This type of incident, with people simply dropping dead in public, was seen in Wuhan, China, at the beginning of it's coronavirus outbreak. Many more such incidents took place in Wuhan and videos from nearby witnesses were uploaded to social media every day until the Chinese Communist Party shut off Internet access.
It is not yet known if closet-Commies infesting the United States will attempt such an Internet shutdown.
The fact this is now taking place in New York City does not bode well for the rest of America. What's taking place here is, sadly, likely to come to YOUR neighborhood as well.

Deaths now One per Hour –

http://freedomslighthouse.net/2020/03/20/new-york-city-coronavirus-deaths-now-one-per-hour-32020/
As the Coronavirus (COVID-19) spreads, we are beginning to see stark numbers of infection and death – particularly in New York City. Today, one death per hour was taking place, and that could become the “new normal” going forward. It is no wonder we are beginning to see the “stay at home” orders in multiple states and local areas.
NEW YORK POST
The coronavirus killed city residents at a rate of more than one per hour on Friday.
Between just 10 a.m. and 6 p.m., 14 people in New York City died from the virus, pushing the Big Apple’s total death toll to 43.
The toll had been 29 prior to Friday’s jump in deaths.
It was the first time that the city’s single-day toll had hit double digits.
And the city’s Health Commissioner, Dr. Oxiris Barbot, warned New Yorkers that double-digit daily deaths may well become the new normal, at least for a time.
“I wouldn’t be surprised if we get to a day when we have double-digits new people dying every day,” she said at a City Hall press conference Friday afternoon. . . .

The Governor of New Jersey, Phil Murphy, announced a STAY HOME ORDER for all citizens of my home state, New Jersey, effective at 9:00 PM eastern US time today, Saturday, March 21, 2020 . . . . UNTIL FURTHER NOTICE.

New Jersey Gov. Phil Murphy ordered residents to stay home, banned all gatherings and told nonessential retail businesses to close by 9 p.m. Saturday in order to slow the spread of the coronovirus.


“I take personal responsibility for the public health and safety of New Jersey,” he tweeted. “If you are unhappy about our aggressive social distancing measures, I’m sorry. But your safety is my highest priority.”

Murphy said he guessed that restrictions would have to remain for “weeks to months."


But he ordered all residents to stay at home with some exceptions, such as obtaining essential goods or services, seeking medical attention, visiting family or close friends, reporting to work, or engaging in outdoor activities. Gatherings such as weddings, in-person services and parties are banned, he said.


“It pains me that important life moments cannot be celebrated the way they are supposed to,” Murphy said. “Any place where people congregate is a place where coronavirus can be spread."


Murphy also argued people not to go to second homes at the Jersey Shore, saying the shore towns aren't prepared for the influx.


The governor's executive order also orders closure of nonessential retail businesses and tells businesses to make arrangements for employees to work from home where possible.


“Life in New Jersey does not have to come to a complete standstill," Murphy said. “Residents can still go for a walk or go for a run outside. ... If you do go outside for these activities, or head to the grocery store, we're urging ... no, we're ordering everyone to practice social distancing and keep a safe, six-foot difference between you and others.”


Asked how long he expected the restrictions to last, Murphy said he guessed it would be “somewhere measured in weeks to months.”