Necessary" For NY, NJ And

CT As US Death Toll Tops


Summary:
*   *   *
Update (2025ET): Have sparked fears earlier that Trump would impose a full blown quarantine on the tri-state area, late on Sunday the president tweeted that a "quarantine will not be necessary" (for now).
Trump's decision is likely in response to Governor Andrew Cuomo's fiery objection, who said that any federal quarantine on metropolitan New York would wreak havoc on commerce and markets and be a declaration of war against the states. “It would be chaos and mayhem,” Cuomo said Saturday on CNN, responding to President Donald Trump’s suggestion that such a move could be made very soon. ”I don’t think it’s legal.”

Donald J. Trump ✔@realDonaldTrump
....Federal Government. A quarantine will not be necessary. Full details will be released by CDC tonight. Thank you!
53.2K
1:19 PM - Mar 29, 2020
Twitter Ads info and privacy

20.1K people are talking about this
* * *
Update (1845ET): After doubling in two days, the death toll from COVID-19 in the US has finally topped 2,000.
Meanwhile, in New York, the state worst hit by the outbreak, Gov. Cuomo has said that the outbreak will peak in “14 to 21 days." While the situation in New York worsens, the surgeon general warned that Detroit, New Orleans and Chicago are quickly developing into "hot spots," New Orleans in particular has been trending in a worrying direction for days.
Of the 17,412 tests run by New York State on Friday, 44% of them (7,681) were positive.
*   *   *
Update (1700ET): Calif. Gov. Gavin Newsom just announced that California's death toll from COVID-19 has topped 100, with 101 deaths statewide.
Meanwhile, in Chicago, Axios reports that an infant less than 1 year old has died of COVID-19 in the city. After state officials in California denied reports earlier in the week about an infant reportedly passing away in LA County after testing positive for the virus, this would be the first confirmed infant death in the US...if it's confirmed, that is.
Most recorded cases in Illinois have been found in the Chicago area and surrounding counties. The state health department has reported 3,491 COVID-19 cases as of Saturday, including 47 deaths.
*   *   *
Update (1624ET): COVID-19 has killed more than 30,000 human beings around the world.

It looks like those last 300+ deaths out of France pushed it over the top.
Though Italy has been carrying a lot of weight on the deaths front lately... 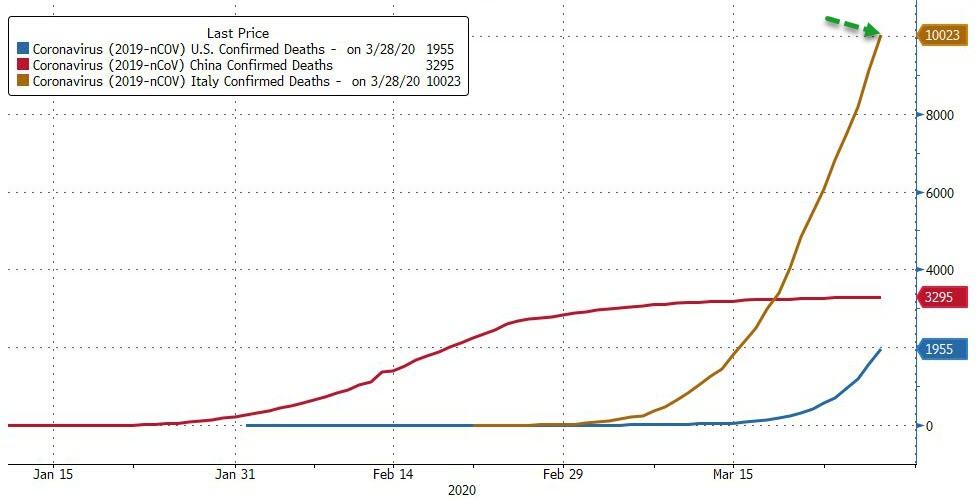 *   *   *
Update (1600ET): Want to see something funny? Watch what happens when journalists from Taiwan question the WHO about comments it made regarding Taiwan's response to the virus. 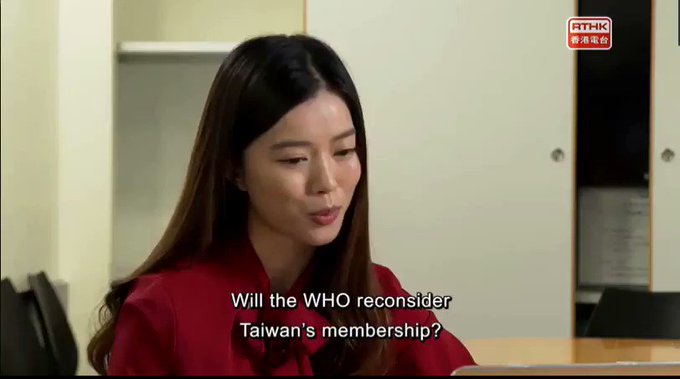 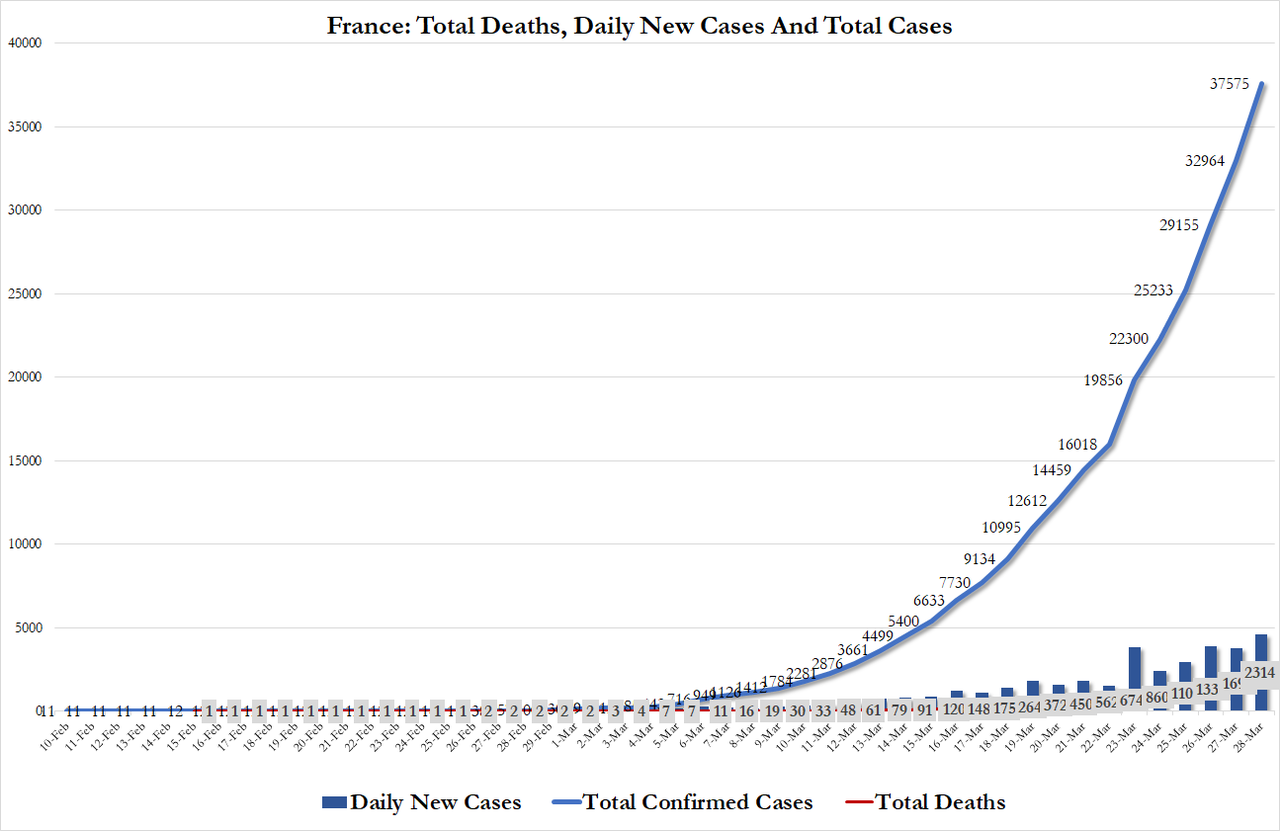 Meanwhile, the number of Italian cases of COVID-19 climbed by 6.9%, the slowest daily rate of increase since Italy's lockdown began.

30 people are talking about this
Two weeks since reporting its first case, Cameroon total cases climbed to 99 on Saturday, as African countries report surprisingly slow spread of the virus despite their relatively poor infrastructure.
*   *   *
Update (1420ET): As the death toll skyrockets, Spanish officials said they would need to tighten quarantine rules, and are now ordering all people to stay indoors at all times, unless they're going to work at an "essential" job. We expect the bare minimum of exceptions (trips outside permitted to get food) will continue.
Meanwhile, in France, large numbers of the public continue to ignore the quarantine. 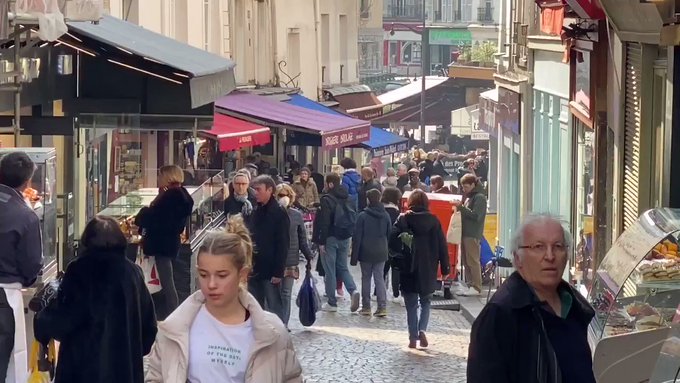 249 people are talking about this
Though France's health minister said Saturday that the country could soon face shortages of critical drugs, he assured the public that an order for 1 billion masks had recently been put in to 'China'.
In Italy, the tone was far more somber.

BNO Newsroom ✔@BNODesk
WATCH: Italian police officers salute those who died of coronavirus as their bodies are transported in military vehicles 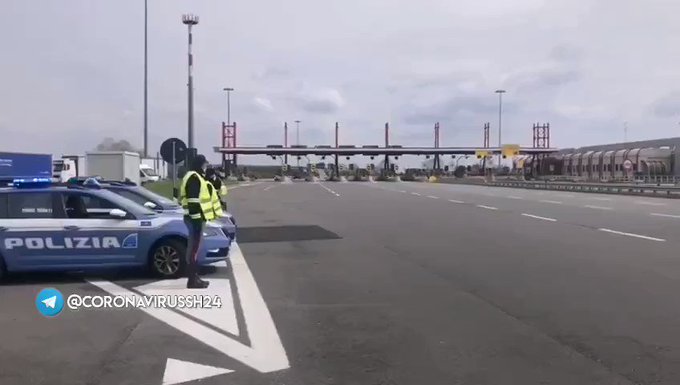 2,073 people are talking about this
*   *   *
Update (1412ET): The coronavirus outbreak has pitted many interests against one another in the scramble for resources. But some of the most flagrant examples of communal selfishness so far have occurred in ritzy Connecticut, where a town full of wealthy bankers and doctors shut down a drive thru testing center (well, they stopped it from opening in the first place), and now, Yale University is at the center of a controversy after refusing to allow the town access to any of its (now empty) facilities to help the community fight off the virus.
Last fall, a gang of idealistic Yale students interrupted the Yale-Harvard Game, one of the few traditions that locals actually enjoy, with an lengthy "interruption" to protest climate change, or whatever. But on this issue, they have been oddly silent (maybe because they're all back home living in their parents' basements right now).
One reporter remarked on twitter that this would be an excellent opportunity for Yale alumni to pressure the school into doing the right thing and helping the community.

Tom Gara ✔@tomgara
Huge opportunity here for Yale alums to publicly pressure the university into doing the right thing while also getting to note in passing that you went to Yale https://twitter.com/gregggonsalves/status/1243676210971971591 …
Gregg Gonsalves ✔@gregggonsalves
.⁦@Yale⁩ should be ashamed of itself. What craven selfishness on behalf of the university I work for. Alums, students, faculty and staff need to speak out! “Mayor: New Haven asks for coronavirus housing help; Yale says ‘no’ “- New Haven Register https://www.nhregister.com/news/coronavirus/article/Mayor-New-Haven-asks-for-coronavirus-help-Yale-15162606.php …
91
12:42 PM - Mar 28, 2020
Twitter Ads info and privacy

27 people are talking about this
*   *   *
Update (1400ET): Abe said Saturday that he's at a precarious stage, and that the government is only barely avoiding declaring an emergency, he said told reporters Saturday evening.
*   *   *
Update (1355ET): Trump just confirmed that he's strongly considering quarantines...after he told a reporter with a camera exactly that.
So in case you didn't get the memo...

Donald J. Trump ✔@realDonaldTrump
I am giving consideration to a QUARANTINE of developing “hot spots”, New York, New Jersey, and Connecticut. A decision will be made, one way or another, shortly.
151K
6:31 AM - Mar 29, 2020
Twitter Ads info and privacy

65.5K people are talking about this
Cuomo says he hasn't heard anything about a quarantine order.
And the governors of Connecticut and New Jersey haven't said anything.

Nick Rondinone@nickrondinone
Nothing yet from @GovNedLamont on President Trump considering quarantine for part of CT, along with NY and New Jersey. https://www.courant.com/coronavirus/hc-news-coronavirus-daily-updates-0328-20200328-5sd7odve7fegzb7hcejpcwszu4-story.html#nt=oft-Double%20Chain~Flex%20Feature~homepage-main-chain~centerpiece~~1~yes-art~curated~curatedpage …

The number of confirmed COVID-19 cases in Connecticut reached 1,291 Friday, following the biggest single-day increase in new reported infections, as the state, hospitals and cities and towns contin...
courant.com
1
6:57 AM - Mar 29, 2020
Twitter Ads info and privacy

See Nick Rondinone's other Tweets
Gov Phil Murphy has been tweeting up a storm, but nothing about the quarantine issue.
*    *   *
Update (1245ET): As the US scrambles to contain COVID-19 as New York emerges as the nation's No. 1 hotspot, US media are reporting that President Trump is considering a national "quarantine" order affecting the entire tri-state area - that is, all of NYC, the greater New York area, north and most of central New Jersey and all of southern Connecticut.
NBC News described it as an "enforceable" quarantine, implying that the national guard, which has been deployed in the area, might be tasked with enforcing it.
In a video that surfaced a few minutes later, Trump can be heard telling an NBC reporter that he was looking at quarantines of New York, and "probably" New Jersey and parts of Connecticut. "They're having problems down in Florida...and we don't want that," Trump said.
A few minutes later, Gov. Cuomo chimed in, telling a reported that he had no idea what Trump was talking about, even though Trump claimed to have just spoken to the governor, presumably about the possibility of a quarantine, which Trump said might be announced "some time today." 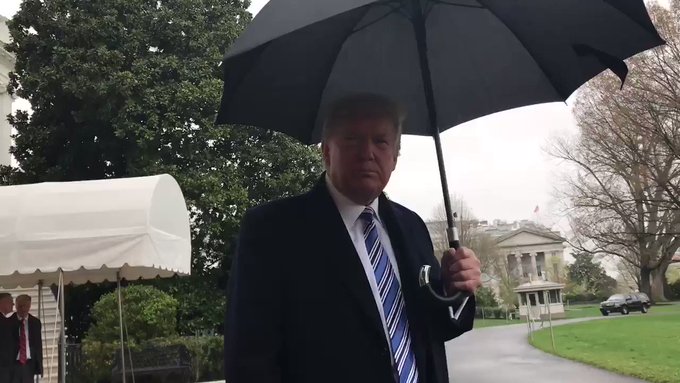 161 people are talking about this
Meanwhile, in New York, the NYPD has confirmed the death of a detective, the first on-duty serviceman to die from the virus. Another ~500 or so NYPD employees (that includes officers and civilians) have also been diagnosed.
*   *   *
Update (1220ET): In Lombardy, the number of confirmed cases climbed by 2,117 to 39,415, a sign that the outbreak might be starting to slow. But the death toll climbed by a startling 542 to 5,944.
*   *   *
Update (1100ET): The Pentagon is taking steps to clarify its powers now that it has the ability to call up reservists and retirees.
Additionally, Italy has now passed China in total infections, with 86,498 to China's 81,996. Following several days of back-and-forth criticism with Michigan Gov. Gretchen Whitmer, whom President Trump infamously referred to as "that woman" and criticized for not taking the outbreak seriously enough, the president finally granted her request for a disaster declaration, as well as one for Massachusetts, according to White House statements released Saturday. And the Italian death toll has passed 10,000, hitting 10,023. 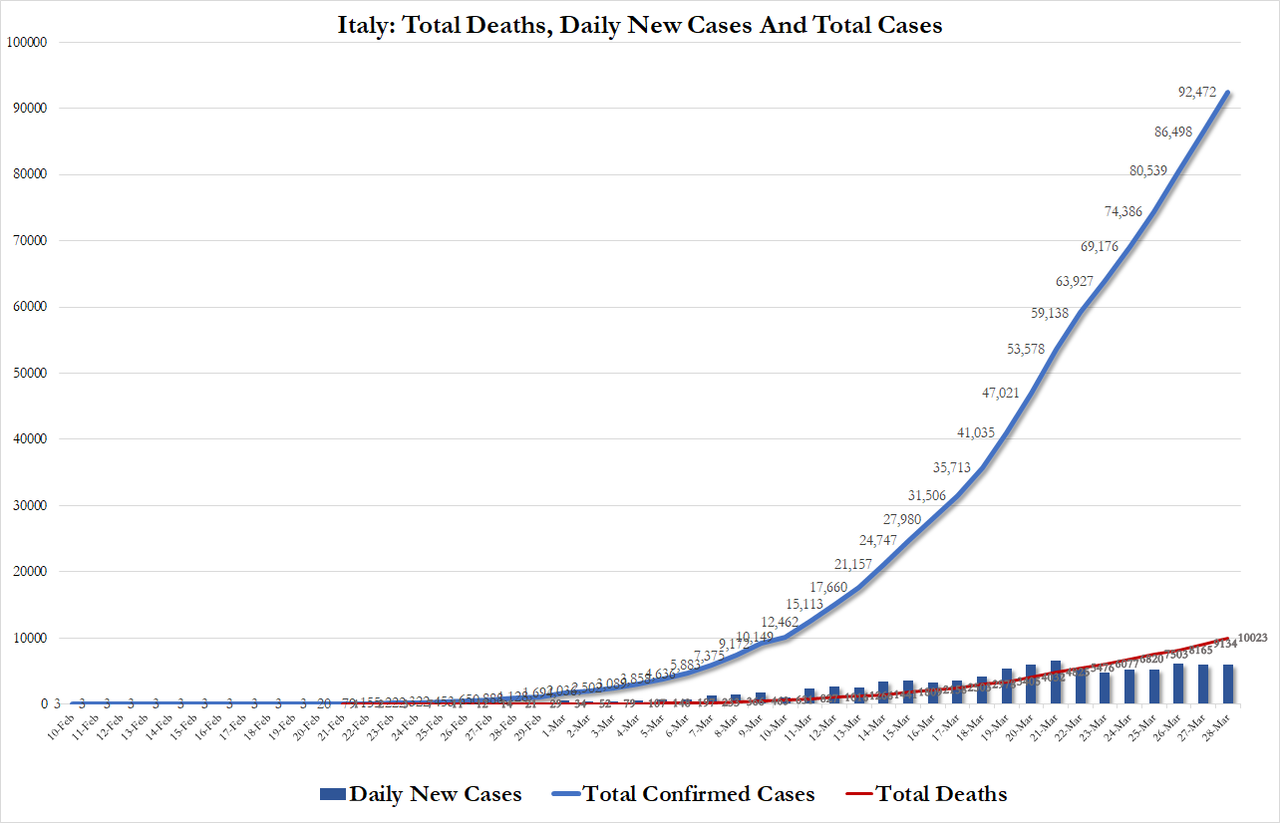 Finally, some good news out of Italy: A centenarian from northern Italy has reportedly been released from a hospital after a battle with COVID-19 that he managed to survive despite being a high-risk candidate with a weak immune system..
The man, identified only as "Mr. P", was admitted to the hospital last week and released on Thursday, according to Gloria Lisi, the deputy mayor of the city of Rimini, told the local Italian language press.
*    *   *
Yesterday, the US reached a critical milestone: it became the first country to record more than 100,000 cases of COVID-19, the illness caused by the novel coronavirus.
Though more people were almost certainly infected in China - epidemiologists have estimated that hundreds of thousands were likely infected in Wuhan alone - the surge in America's testing capacity, something that's only going to continue to improve thanks to a slate of new rapid-response tests are hitting the market, means the US will almost certainly record the largest number of infected patients going forward.
Already, the global total of confirmed cases surpassed 600,000 overnight, thanks mostly to the US, though Spain and Italy also reported large numbers of new cases and deaths reaffirming that the lockdowns in each of their respective countries are far from over.
A chart produced by the New York Times and published last night sparked a heated debate online as journalists, scientists and other wannabe 'experts' weighed in on the possibility that the outbreaks in New York City, Detroit and New Orleans might be more severe than what Italy has seen in Lombardy. 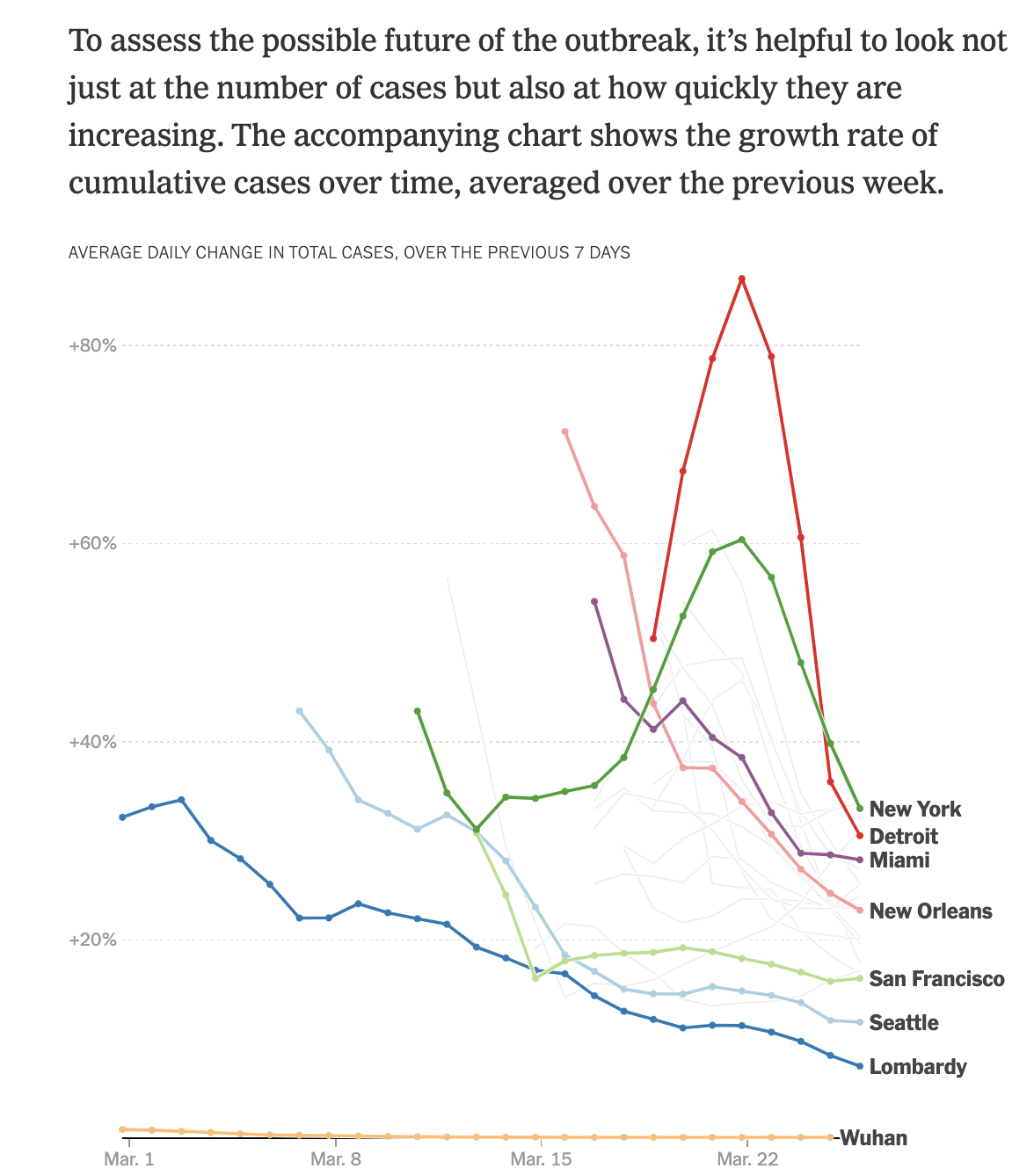 Source: New York Times
Meanwhile, Spain recorded its deadliest day so far, but new infections are slowing after two weeks of lockdown. The Spanish Health Ministry reported 832 new deaths, bringing the country's death toll to 5,690 as of early Saturday, a 17% jump. The number of confirmed cases climbed to 72,248 from 64,059. Spain now has the second-highest number of deaths, outside of Italy. 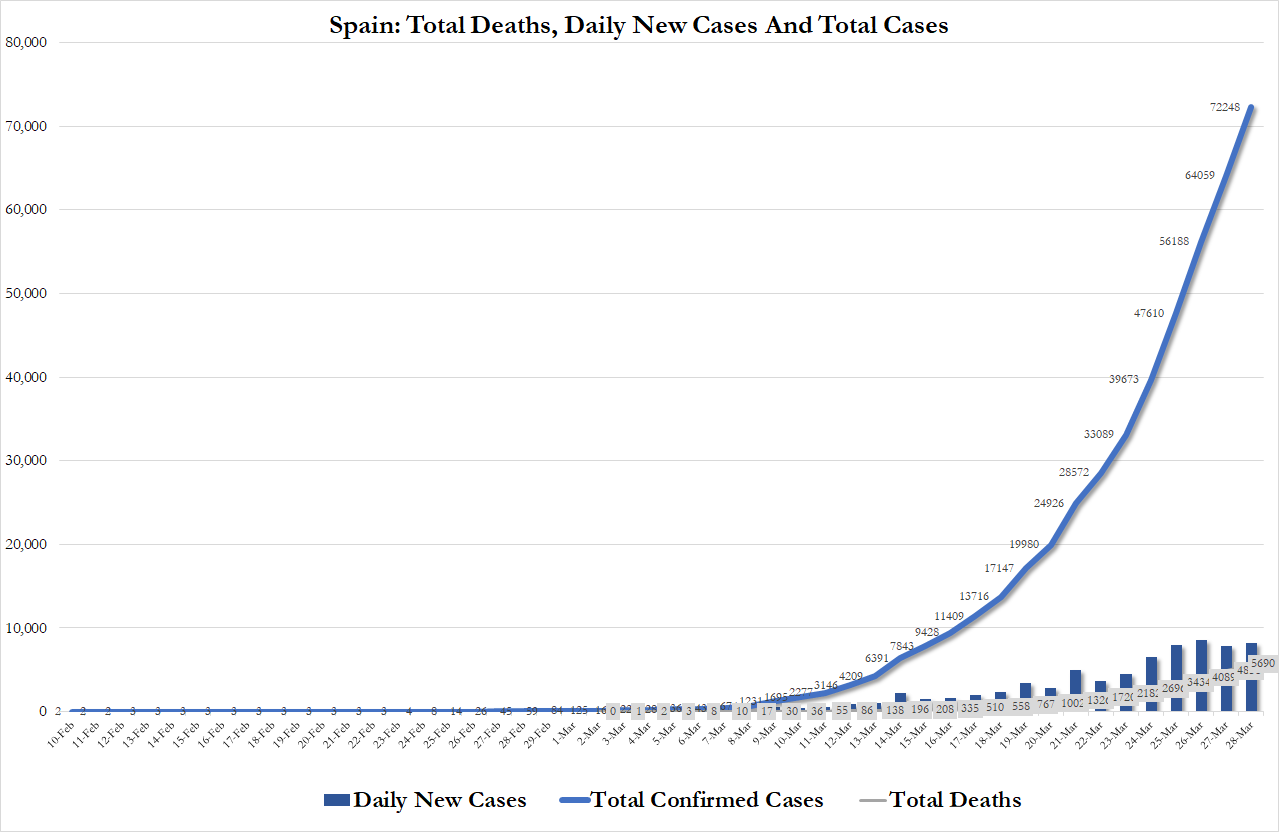 In the latest hint at how the outbreak-induced recession will reverberate through secondary and tertiary industries, Airbnb confirmed on Friday that it's suspending all third-party marketing work in an attempt to save some $800 million, one of several initiatives that it hopes will save the company lots of money during the crisis. As UK Prime Minister Boris Johnson and his Health Secretary Matt Hancock struggle to continue performing their duties after being diagnosed with COVID-19, Fitch downgraded the UK’s credit rating from AA to AA-, citing the budget impact of the coronavirus pandemic and continued uncertainty over Brexit. 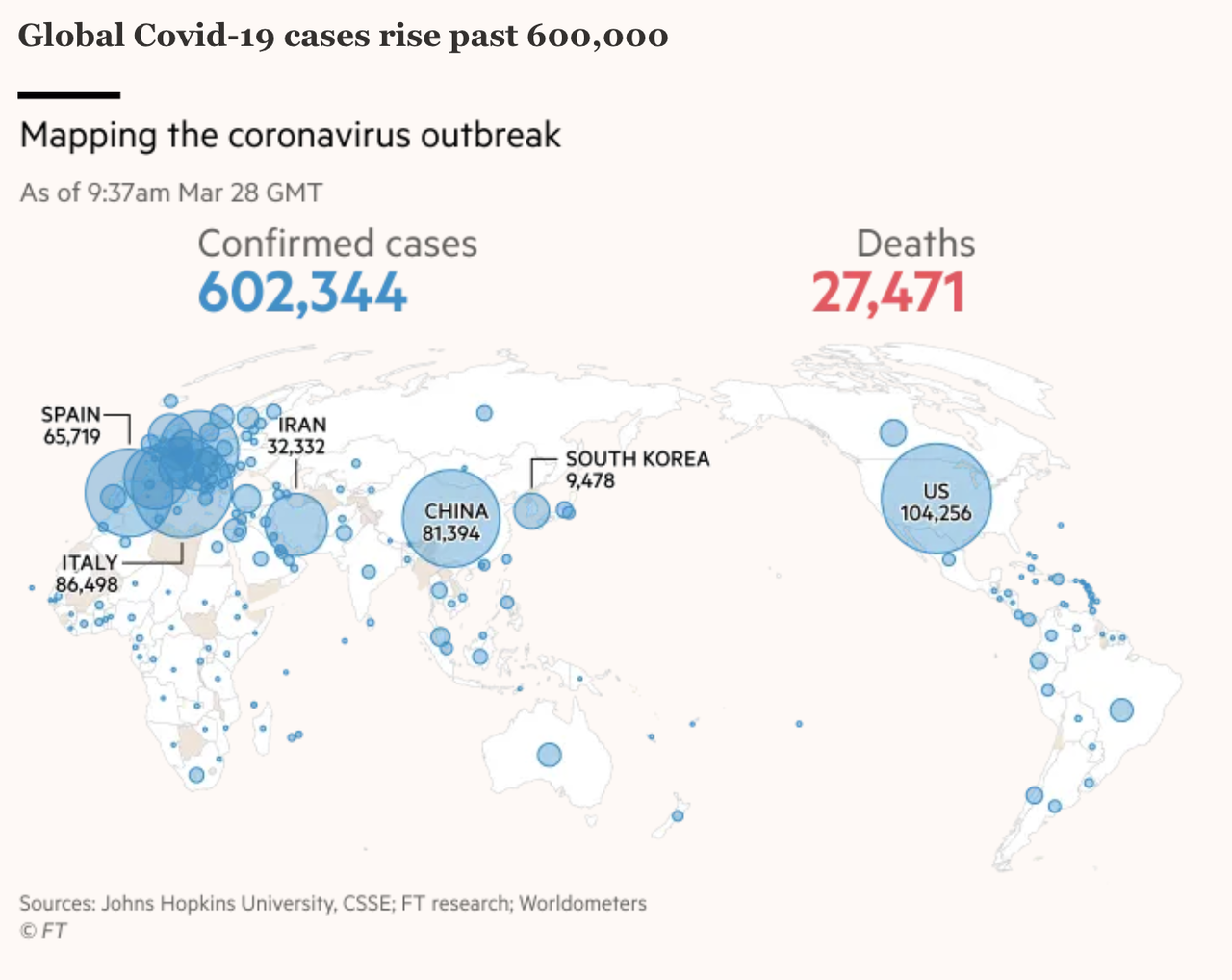