Brenton Tarrant pleads "GUILTY' on day one of nationwide lockdown

Very strange timing that this should coincide with the start of

The man accused of the Christchurch mosque attacks has entered shock guilty pleas, bringing relief to survivors and victims' families.
Amid extraordinary coronavirus lockdown restrictions, Brenton Tarrant, 29, appeared via video-link in the High Court at Christchurch on Thursday morning and admitted 51 charges of murder, 40 charges of attempted murder and a charge of engaging in a terrorist act.
He'd previously pleaded not guilty to all the charges and was scheduled to stand trial on June 2.


Tarrant, who wore a grey prisoner sweater, was largely silent and emotionless throughout the hearing. He sat alone in a white room with a grey door at Auckland Prison, Paremoremo, where he's held in maximum security.
The terrorist's lawyers, Shane Tait and Jonathan Hudson, appeared via video-link from another court room.


The names of all 51 people killed were read to Tarrant, before he was asked how he pleaded to the murder charges.
He replied: "Yes, guilty."
The same process was followed for the attempted murder charges.


Justice Cameron Mander remanded Tarrant in custody, but has not yet set a date for sentencing, when the summary of facts would be made public.
Few people knew of the special hearing, which was only scheduled late Wednesday, on the eve of an unprecedented nationwide lockdown to prevent the spread of the Covid-19 coronavirus.
Six New Zealand journalists attended. Also in court were the imams from both targeted mosques. An-nur (Al Noor) imam Gamal Fouda was visibly upset as the guilty pleas were entered.


The hearing concluded at 10.30am, but the judge suppressed the outcome for an hour to allow victims, who were unaware of the hearing, to be notified.
The decision to hold the hearing amid the national state of emergency was not made lightly.
Earlier in the week Tarrant indicated to counsel that he might change his pleas. A formal request was made on Wednesday that the matter be brought before the court. 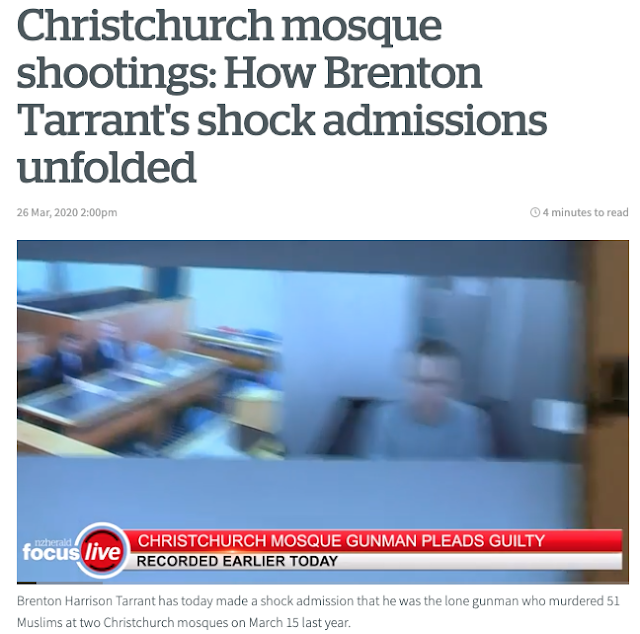 9 months ago
Posted by seemorerocks at 14:50