tonnes of medical supplies to 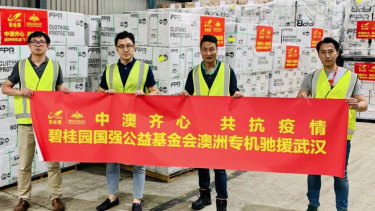 
A second Chinese property company based in Sydney flew more than 80 tonnes of medical supplies on a corporate jet to Wuhan in late February, at the time coronavirus was devastating the regional city.

"The chartered plane with 90 tons (82 tonnes) of medical supplies, including 100,000 most needed protective coveralls and 900,000 pairs of medical gloves, has successfully departed from Sydney and arrived in Wuhan on 24 Feb," Risland Australia posted on its LinkedIn page.

Risland, formerly known in Australia as Country Garden, is a totally owned subsidiary of Country Garden Holdings, one of China’s largest property developers.

Its major shareholder is 38-year-old Yang Huiyan, the richest woman in China

The Herald has previously reported another major Chinese developer was doing the same thing. Employees of Greenland Australia, a subsidiary of the Chinese government-backed global property giant Greenland Group, were instructed to put their normal work on hold and source bulk supplies of essential medical items to ship back to China.

A whistleblower from the company has told the Herald it was a worldwide Greenland effort - and the Sydney office was no different, sourcing bulk supplies of surgical masks, thermometers, antibacterial wipes, hand sanitisers, gloves and Panadol for shipping.

"Basically all employees, the majority of whom are Chinese, were asked to source whatever medical supplies they could," one company insider told the Herald. This went on for weeks through January and February, he said.

The humanitarian efforts of Chinese companies to help their desperate compatriots back home may have contributed to shortages of products in Australia.

By late January medical experts were worried about the lack of available masks. "The thing we need most as GPs is some masks," said Dr Harry Nespolon, president of the Royal Australian College of GPs. "They are not readily available."

As the surge of coronavirus infections increases, healthcare workers are becoming desperate. "The shortage of personal protective equipment in NSW hospitals is scandalous," one healthcare worker told the Herald. "Doctors and nurses on the front line feel inadequately protected, exposed and vulnerable."

In one major Sydney hospital "junior doctors are being told there are only 30 N95 masks available for all operating theatres". The healthcare worker said this was forcing people to source masks from the "black market," the quality of which is dubious.

In February Risland’s LinkedIn page showed pallet-loads of safety gear being stored in a warehouse ready for shipment. "90 tons of selective medical supplies… ready for the air transport direct from Sydney to Wuhan via corporate jet on Monday next week," said the company’s post.

The LinkedIn post said it was "an exceptional and meaningful day" for the company in its "campaign to show our strong faiths to Wuhan people and our ultimate appreciation to those who work days and nights and fight against the virus at the front line."

Richard McGregor, a China analyst at the Lowy Institute said Greenland and Country Garden would have been expected not only to do their part, but to publicise their patriotism by helping out the country at a crucial moment

"In China ... companies can live and die according to government decisions," he said. "Real estate companies are particularly exposed to government whims, as all land is owned by the state."

The Minister for Home Affairs Peter Dutton is working on a plan to crack down on hoarders who are profiteering out of COVID-19 as well as giving authorities more powers to be able to seize items at the border including medical supplies.

There will also be increased penalties for the people and groups who are flouting consumer laws by sending items overseas for huge profits.

Posted by seemorerocks at 18:01