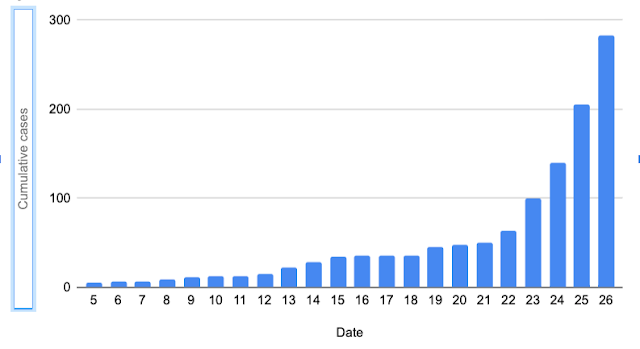 
The Ministry of Health has announced 78 new cases of COVID-19 in New Zealand.

Seven people have been hospitalised in a stable condition. Three patients are in Wellington Regional Hospital, two are in Nelson Hospital and one each in Waikato and Northland hospitals. No patients are in the ICU.

The majority of the 78 new cases still have a link to overseas travel, including being in the same household as someone who has returned from overseas; attending a known event; being linked to a cluster of cases or are close contacts of a confirmed case.

The Ministry of Health are currently investigating several possible clusters:

On Wednesday, 2417 tests were processed around the country. To date, 12,683 tests have been processed nationwide.

"These are unprecedented times... we expect the number of COVID-19 cases in New Zealand to continue to increase over the coming days. I urge all New Zealanders to continue to do your bit," Dr Bloomfield said. "We're all in this together."

"We're seeing the majority of New Zealanders doing a great job at compliance... stay home, stay safe. Respect others. If we don't comply, the consequence of that is that people will die. Our job is to ensure that we keep those people safe and well," Commissioner of Police Mike Bush announced during the update.

"We're approaching this by being very visible in the community... next, we'll engage with people to ensure they know what's required of them. We will take a discretionary approach in the first instance. People will be warned and challenged about whether what they're doing is essential or if they are an essential service.

"Serious breaches and prolific breaches will be prosecuted. We are stopping people as they go to work and on the streets, just to engage, in a professional, calm and friendly manner. We have had to provide some education [to New Zealanders]."

Bush confirmed that legislation, including the Health Act and the Civil Defence Emergency Management Act, allows police to stop, detain and enter premises. If people obstruct or don't comply with protocols, they can be arrested.

The Police Commissioner also reiterated that New Zealanders who have returned to the country will be subject to spot checks by police within three days of their self-isolation to ensure their compliance. On Thursday morning, 360 people arrived at Auckland Airport from several flights.

Dr Bloomfield confirmed the Ministry of Health has identified close contacts at a number of public events, including a recent Wellington wedding, and has taken appropriate action. Information regarding exact locations and times people may have been at risk regarding the Ruby Princess' Hawke's Bay visit will be released soon.

Amid the lockdown, it's imperative people understood that not all cases of COVID-19 are severe - some cases may not even know they are ill. That's why all New Zealanders must act as though they have COVID-19 when it comes to their day-to-day endeavours.

New Zealand in level four lockdown
In an effort to limit New Zealander's exposure to the respiratory disease, the country went into lockdown on Wednesday night. People cannot leave their houses unless it is absolutely essential. All non-essential businesses have been closed, domestic travel has been limited and schools have been shut.

Police have increased their presence in the community during the lockdown period and on Thursday morning, Police Commissioner Mike Bush told The AM Show that officers found people still driving overnight, claiming to have no knowledge of the new rules announced on Monday. He said offenders will be arrested and detained if they repeatedly break lockdown protocols.

Prior to Thursday's new numbers, New Zealand case total stood at 205, including 16 probable cases. Twenty-two people have recovered from the illness. The cases are spread nationwide, although the majority are in Auckland. 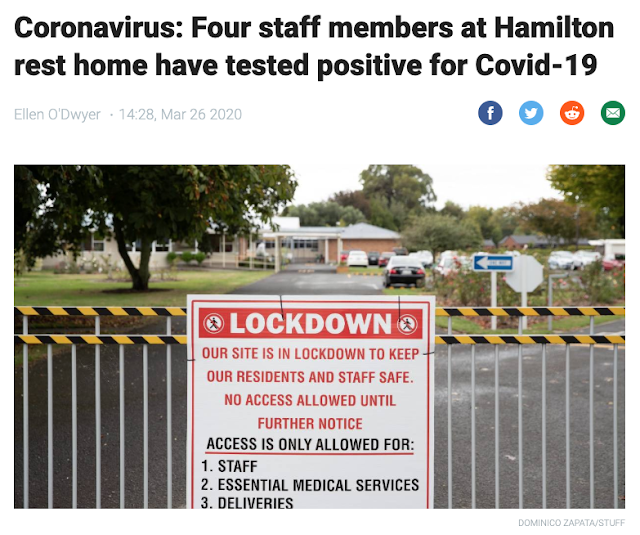 Four staff members at a Hamilton rest home have tested positive for coronavirus.

The staff at Atawhai Assisi Home on Matangi Rd were part of a group of 27 staff members who were stood down due to contact with a resident who tested positively for the virus on Sunday, March 22.

On Thursday, Director-General of Health Ashley Bloomfield said a Hamilton rest home was the site of a cluster of cases the Ministry of Health had identified.


https://www.stuff.co.nz/national/health/coronavirus/120594481/coronavirus-four-staff-members-at-hamilton-rest-home-have-tested-positive-for-covid19
Posted by seemorerocks at 14:34