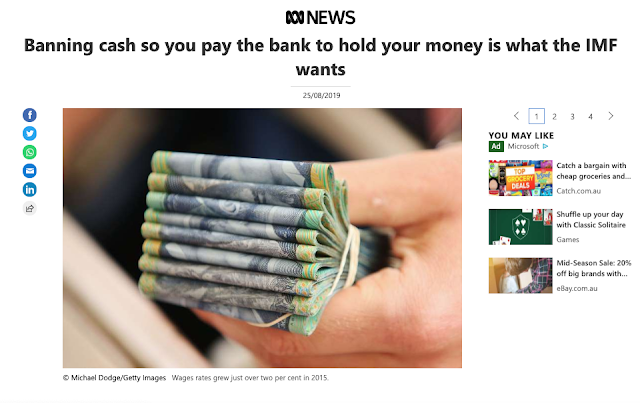 The Federal Government moves to ban cash transactions above $10,000, there's a theory gaining traction that the real motive for the cash ban isn't the so-called "black economy", but rather, to give authorities greater control over your behaviour during recessions.


This theory, put forward by economists such as John Adams — and picked up by some federal politicians — has not been plucked out of thin air.


It is based on repeated public papers and statements by the international body in charge of financial stability — the Washington-based International Monetary Fund (IMF).


A recent IMF blog entitled "Cashing In: How to Make Negative Interest Rates Work", explains its motive in wanting negative interest rates — a situation where instead of receiving money on deposits, depositors must pay regularly to keep their money with the bank.


Ten years later, interest rates remain low in most countries, and "while the global economy has been recovering, future downturns are inevitable".

"If another crisis happens, few countries would have that kind of room for monetary policy to respond."


The article then goes on to explain that to "get around this problem", a recent IMF staff study looked at how it could bring in a system that would make deeply negative interest rates "a feasible option".


The answer, it said, is to phase out cash.

The thought of paying the major banks to hold your money isn't one that most consumers would jump at.


The alternative — as risky as it may be — is hoarding cash, or making investments in tangible commodities like gold.


So, the end game, the article explains, is the IMF's ideal world — one without cash.


"Without cash, depositors would have to pay the negative interest rate to keep their money with the bank, making consumption and investment more attractive," it said.


This, would "jolt lending, boost demand, and stimulate the economy".


In other words, the central banks get greater control to influence your behaviour and economic outcomes.


For those who have faith in monetary policy and central banks, this is no problem.


But one year on from the banking royal commission, faith in our financial institutions — and the regulators who failed to police the banks' bad behaviour — isn't exactly at an all-time high.


This weird world where savers are penalised — and borrowers get paid — is no longer just a problem for central banks in Europe and Japan.


The Reserve Bank's consecutive interest rate cuts in June and July have taken the cash rate to an historical low at just 1 percent.


Put this together with Governor Philip Lowe's comment on August 9 at a parliamentary hearing.


He was asked by Labor's Andrew Leigh what work the Reserve Bank has done on what "unconventional monetary policy" might look like as Australia heads towards the zero lower bound of interest rates.


Dr Lowe answered: "I think it's unlikely, but it is possible. We are prepared to do unconventional things if the circumstances warranted it."


In answering some other questions Dr Leigh threw his way, Dr Lowe also noted that "monetary policy is less effective than it used to be".

"Once upon a time, when we lowered interest rates people were very quick to run off to the bank to borrow more to spend," he said.


"In today's environment people don't run off to the bank to borrow more when interest rates fall; they are more likely to pay back their mortgage more quickly."


Dr Lowe also noted international political tensions are weakening the global outlook, "and it's very hard for central banks to completely offset that".


Now let's return to the problem of the 'black economy'.


Australia is not standing alone in moving towards a cash limit.


A number of other countries have already imposed limits — France has banned cash transactions above 1,000 euros; Spain above 2,500 euros; Italy above 3,000 euros.


Also, in 2016 the European Central Bank (ECB) announced it would end the production and issuance of its 500 euro note at the end of 2018.


As the ECB was implementing this change, the man who headed the Federal Government's Black Economy Taskforce — the late Michael Andrew (he died in June) — was undertaking the enormous task of pulling together an array of information about the scale of the illegal cash economy.


Mr Andrews has previously said that the biggest hurdle to tackling the black economy is cultural.


Australians, he said, viewed taking cash-only payments and not declaring it as "almost a national sport".


The taskforce went on to estimate the cost of the illegal cash economy could now be about 3 per cent of GDP — roughly $50 billion.

But, this figure, it said, was a qualitative estimate, based on a wide definition of what activities make up the black economy.


The taskforce in its final report suggested that the ABS do proper modelling on the economic and social costs.


This work has not yet been done.


Yet the Government is moving ahead with proposed laws that could make people criminals — with the threat of two years in jail — for spending more than $10,000 in cash.


The politics will dictate whether and how quickly the Government can push its cash limit bill through, with One Nation already indicating it will not support the proposed law, but Labor saying it likely will.


Opposition assistant treasury spokesman Stephen Jones has also indicated that he wants to see the ban apply to Bitcoin — a move that would send the Bitcoin industry into disarray given its repeated public campaigns to invest in the digital currency to avoid the proposed cash ban.


But that's not all that is in store under the Government's 'fighting the black economy' banner.


Treasury is asking the public whether the Government should also change the law to reverse the onus of proof for "serious black economy offences" and give the Australian Taxation Office (ATO) even more powers to hunt down whomever it deems to be a 'black economy' criminal.


This proposal has already faced much criticism from tax experts and business lobbies that say such measures could adversely impact the rights of individuals and their liberties.
https://www.msn.com/en-au/money/personalfinance/banning-cash-so-you-pay-the-bank-to-hold-your-money-is-what-the-imf-wants/ar-AAGjopy