Oil price falls to below $20 a barrel

Oil price falls below $20 US a

Quarantines and lockdowns have cut demand for 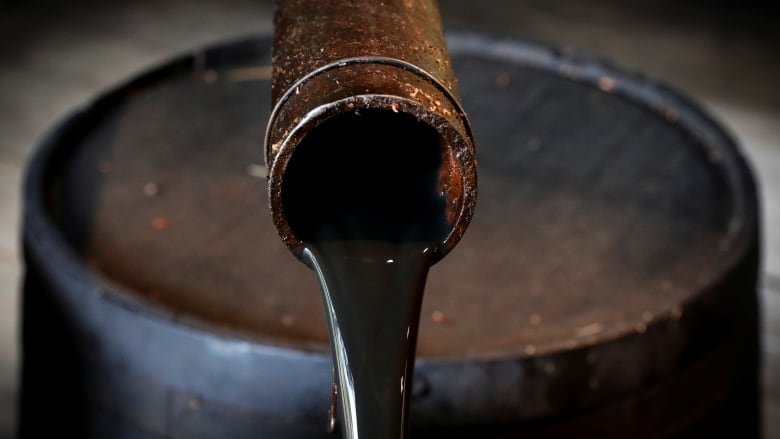 https://www.cbc.ca/news/business/oil-price-plummet-monday-1.5514653?__vfz=medium%3Dsharebar&fbclid=IwAR17vzf0QA4VMc9tPU2bZeEtSDSaN4CWRbdrCYZczAU6LYpgfuOoWPjdouw
The benchmark price for a barrel of North American oil dipped below $20 US on Monday morning, the first time that's happened in 18 years.
West Texas Intermediate was at one point changing hands for as low as $19.92 a barrel, down more than $1.50 on the day.

The type of oil from Canada's oilsands is known as Western Canada Select and it, too, is getting hammered, down another $1.41 to $3.82 US a barrel. That's the lowest price for that type of crude on record.
The true price is, in fact, even lower than that, because that price includes in part the cost of lighter oil that oilsands crude is blended with in order to get it to move along a pipeline. If that part of the mix is stripped out, it's not a stretch to suggest that the bitumen itself is functionally worthless.
The quarantines and lockdowns to combat the coronavirus that causes COVID-19 have completely waylaid global demand for oil, as shuttered factories need less energy, quarantined consumers don't need to drive anywhere, and grounded airplanes don't need refueling.
"Crude oil is getting hammered again on expectations for a steep drop in demand from reduced travel," said Colin Cieszynski, chief market strategist at SIA Wealth Management in Toronto.

Canada's oilsands blend almost always sells for far less than other types of oil because it is more difficult to process, and refiners on the U.S. Gulf Coast have to deal with transportation issues like pipeline bottlenecks just to get it.
That's at the best of times, which hardly describes what the current oil market is experiencing.
"Demand for gasoline (no driving) and jet fuel (no flying) has now crashed," said Bjarne Schieldrop, chief commodities analyst at Norwegian research firm SEB.
The International Energy Agency estimates global demand for oil is down by about five million barrels a day right now, chiefly because hundreds of millions of locked-down consumers have no need to get on a plane, or fill up their cars with gasoline.
"Inventories for these products are already brimming," Schieldrop said. "Refineries in many places are now losing money for every barrel they process, or they have no place to store their output of oil products. When refineries shut down, then many crude oil producers have nowhere to send their crude oil."

WCS could go to zero — or worse

If refiners are losing their appetite for blends like West Texas Intermediate, the outlook for Western Canada Select is even worse. Canadian oilsands producers are facing "months of lower production at prices close to zero," analysts at JBC Energy said Monday morning.
Indeed, it's not impossible to imagine the price of WCS soon going even below that previously unimaginable level.
One blend of heavy oil has already gone negative. Wyoming Asphalt Sour, a heavy blend of oil primarily used for making paving bitumen, has already seen some traders offering -19 cents US per barrel for it, in the middle of March. That's "effectively asking producers to pay for the luxury of getting rid of their output," Bloomberg reported over the weekend.
Much like WCS, Wyoming sour doesn't have any easy access to sea ports where it could perhaps be shipped to the highest bidder. So its cratering price is a lesson for other landlocked blends that are likely to soon stop production as demand grinds to a halt, Schieldrop said.
"For land-based or land-locked oil producers, this means only one thing: The local oil price … which they receive very rapidly goes to zero or even negative," Schieldrop said.
"If they have too much oil, they must pay someone to transport it away until they have managed to shut down their production." 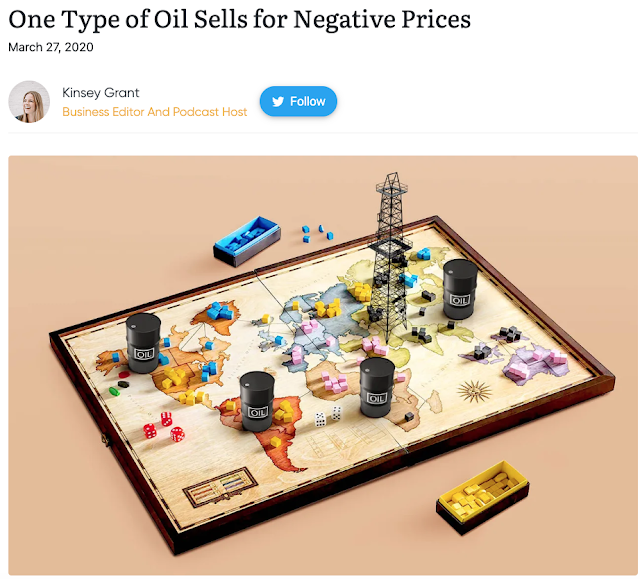 Wyoming Asphalt Sour, a dense oil used to make paving bitumen, sold at negative prices in mid-March. As in, producers are paying buyers to take barrels off their hands.
How that happens: Unlike Facebook shares or Treasury bonds, oil is a physical commodity that needs to be stored somewhere once it’s pumped out of the ground. When storage costs climb high enough (or space runs out) producers might pay buyers to take it.
Looking ahead...Wyoming Asphalt Sour was the first crude stream to flip negative, but it might not be the last. A handful of other North American crude grades are trading dangerously close to zero, Bloomberg reports.
https://www.morningbrew.com/daily/stories/2020/03/27/one-type-oil-sells-negative-prices?fbclid=IwAR0-3NOkhJGFTWO_h0NZjo5q9VX4GhKoJKxoRqu1UIYDbbaBKZjCr_g45hg
Posted by seemorerocks at 18:42