The fire danger returns in NSW 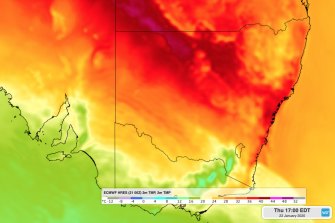 NSW residents are warned recent rainfall has not extinguished bushfires burning across the state, and there is no room for complacency with high temperatures and elevated fire danger about to return.

The Rural Fire Service (RFS) has graded fire danger at "severe" levels in a number of regions on Thursday, including the Shoalhaven, Hunter, Illawarra, Sydney, North Western, and the southern and central ranges.

Total fire bans are in place for each of those areas on Thursday.

The Bureau of Meteorology is forecasting temperatures in the high-30s to low-40s for much of NSW on Thursday amid strong north-westerly winds.

Sydney is predicted to hit a high of 41, with the chance of a thunderstorm in the afternoon and evening as well as gusty winds. Even the Bondi area, which is usually a few degrees colder due to coastal winds, is tipped to reach 39 degrees.

Fire weather is looking particularly dangerous in the Blue Mountains, where 45-60km/h winds are forecast with gusts in elevated areas potentially surpassing 90km/h.

A weak southerly change won't hit Sydney until early on Friday morning, dropping temperatures and bringing possible showers – but temperatures on Friday and the weekend will remain above the average (26) for January.


Nowra, near the Currowan fire that has devastated much of the Shoalhaven region, is also forecast to hit 40 on Thursday. Bowral, in the Southern Highlands, with fires burning to its north and south, is forecast to reach 35.

With more than 60 fires still burning across NSW, RFS spokesman Ben Shepherd said Thursday will be another "testing day" for firefighters and communities close to the danger.

Recent heavy rainfall across parts of the state "was most welcome but it might give people a false sense of security", he said.

While isolated areas received a large volume of rain during wild thunderstorms earlier this week, many firegrounds – including in the Southern Highlands and far south coast, only received 10-15mm, Mr Shepherd said.

While that "did take the sting out of current fire activity", it was not enough to significantly impact the fire danger.

"By no means are [the fires] all out, and it is likely over coming days that we will see fires burn and move again," he said.

Thunderstorms moving across the state may also result in a repeat of the dust storms seen in central-western NSW on Monday, bureau meteorologist Abrar Shabren said.

There is also potential for dry lightning strikes to result in new ignitions, and hot weather in the days following could see them catch on if there is not enough moisture around.

However, Mr Shabren said there appears to be more showers on the horizon for next week.