This could not be more relevant. Do not expect any truth to come out of the impeachment proceedings 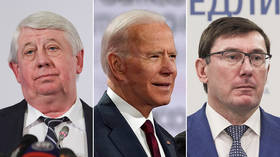 The Ukrainian prosecutor who Joe Biden pushed to oust had six cases against Burisma but they fizzled out after he left, a new documentary shows challenging the narrative by the former vice president that the media failed to check.

When Joe Biden lobbied Ukrainian President Petro Poroshenko to replace Viktor Shokin with Yuriy Lutsenko in 2015, his entourage claimed that Shokin had failed to thoroughly investigate corruption, and by pushing for his replacement “saint” Biden even acted against his family’s interests.

The American media reported that Shokin’s case against Ukrainian energy company Burisma had gone “dormant,” and that by pressing for Lutsenko’s appointment, Biden was quashing corruption, even if that meant subjecting his own son to investigation in the process. Hunter Biden was on the company’s board from 2014 till 2019. However, documents collected by Berruyer show that Shokin’s Burisma probe was far from “dormant.” Shokin himself even told ABC News that his office had six investigations into Burisma open at the time of his resignation.

Lutsenko, he said, “stopped all those cases.”

ABC didn’t air this part of the interview, and the American media – including the Washington Post and the New York Times – continue to label Shokin’s investigation “dormant,” despite a number of publicly available documents showing otherwise and presented in the documentary.

One day after Lutsenko’s appointment, Biden called Poroshenko to welcome the announcement, and to inform him that the US would move forward with a $1 billion aid loan to Ukraine.

The cases against Burisma and its head Mykola Zlochevsky were closed under Lutsenko for various reasons. The company paid around $7 million in taxes, but it’s a fraction of the $70 million that Lutsenko himself said the company owed.

Berruyer does not claim that Shokin is an incorruptible public servant, and says that there are two hypotheses for the reasons for investigation. Either he wanted to punish criminal activity, or he may have been motivated to pursue the Burisma case to seize the assets of the company’s founder, Mykola Zlochevsky, before shaking the oligarch down for a bribe.

“In any case, this issue doesn’t change anything about the main point, Joe Biden’s involvement. Since the investigations were moving forward, he de facto helped the oligarch, voluntarily or not,” Berruyer said.


Here are the first two parts. There are more to come