China accused of 'burning bodies in Wuhan in secret'

Just a day ago this information would have been “fake news”; now it is mainstream

of 'burning bodies in secret' 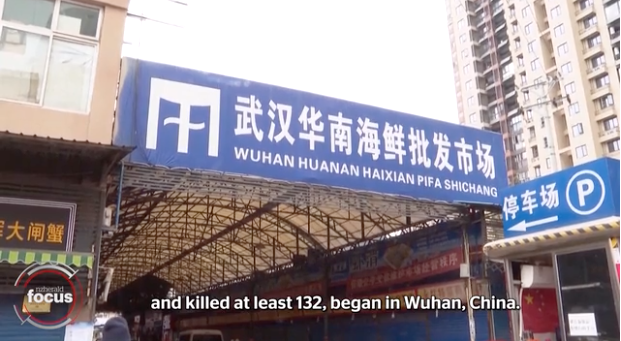 World health officials, back from a visit to Beijing, expressed great concern that a dangerous new virus was spreading between people outside of China, even as the number of illnesses continue to grow dramatically inside that Asian nation.

The new virus has now infected more people in China than were sickened during the 2002-2003 severe acute respiratory syndrome (SARS) outbreak. On Wednesday, the number of cases jumped to 5974, surpassing the 5327 people diagnosed with SARS.

The death toll, which stood at 132 on Wednesday, is lower than the 348 people who died in China from SARS.

Doubts have been raised about the official death toll, however, with claims Chinese authorities have been cremating bodies in secret.

Chinese-language news outlet Initium interviewed people working at local cremation centres in Wuhan, who said bodies were being sent directly from hospitals without being properly identified and added to the official record. 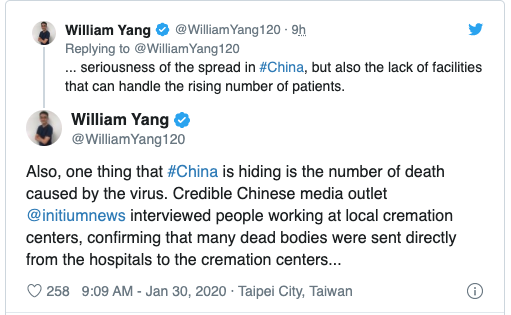 So there are reasons to remain sceptical about what China has been sharing with the world because while they have been more transparent about certain things related to the virus, they continue to be sketchy and unreliable in other aspects," said DW News East Asia correspondent William Yang.

Scientists say there are still many questions to be answered about the new virus, including just how easily it spreads and how severe it is.

The World Health Organisation's emergencies chief told reporters that China was taking "extraordinary measures in the face of an extraordinary challenge" posed by the outbreak.

Dr Michael Ryan spoke at a news conference after returning from a trip to Beijing to meet with Chinese President Xi Jinping and other senior government leaders.

He said the epidemic remained centred in the city of Wuhan and in Hubei province, but "information is being updated and is changing by the hour".